In some place, 100% humidity would mean it was actually raining. Not in Virginia. Here it meant that all the rain we got last night was coming up from the ground and making it feel like I was running underwater. Since I’ve never really perfected that breathing water thing, it was a pretty miserable run. I did manage to finish four miles at about a 9:30 pace.

After my lovely (NOT) run, I gave blood. When I was getting the initial workup done, the technician took a look at my driver’s license and at me and said “how’d you do it?” I looked blank and she pointed to the license and said “It looks like a different person.” Oh, that. Well, I was 7.5 months pregnant with Shoo when I got my license renewed. Guess all the running since then has made a difference. ;o) I have cheekbones and a collar bone now. The phlebotomist managed to hit a nerve while inserting the needle and I nearly jumped out of the seat from the feeling of an electric shock going down my arm. I’m going to have a lovely bruise tomorrow.
Yesterday and today we took the boys to the county fair. Jones has always been pretty timid about the rides and is scared of heights, so I was totally shocked at some of the rides he chose. It’s amazing what a little peer pressure will do (which makes me more than a little nervous). Shoo, on the other hand, road every ride that he met the height requirement on and would have ridden others if he could have. While we were at the fair, the temperature was in the high 90s, so we were all pretty worn out. Shortly after we got home, the skies opened and we finally got some of the rain we’ve been needing. Amazingly, despite off and on downpours, we managed to go twice when it was hot and sunny.
Beer Geek and the boys on the Ferris Wheel 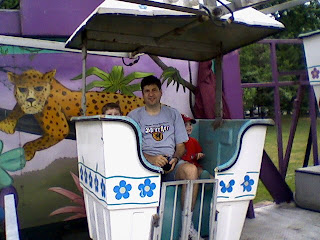 24 hours till we leave for Grandma and Papa’s!