You are here: Home / half marathons / My very iffy 2016 Spring Race Schedule

Are you joining us for Tuesdays on the Run this week? Welcome! Today’s topic is 2016 race plans and I’m gonna be honest and tell you that my spring is very unsettled at this point. A big part of this is that I’m contemplating attempting Mercury with Half Fanatics (23 states in 365 days).

I have 7 states done since September, which is lower than I’d like at this point. Also, we do not have Shoo’s soccer schedule for the spring and I’ve already managed to sign up for one race that conflicts with a tournament, sigh. So, here’s my very tentative, might change completely (except for the Mainly Marathons races) schedule:

March 12 – RNR DC – Somehow this race always kicks off my season. Some years I love it, some years it’s miserable. I have a lot of friends running this year, so I should have fun, but it conflicts with a tournament. (#8, DC, registered)

May 8 – Frederick Running Festival – I love this race, so will likely do it even if I throw in the towel on the Mercury pursuit. (#12, MD)

June 4 – ZOOMA Annapolis – I’m actually thinking that the 10k is a better option that weekend.

June 12 – Skirt Sports 13er – I really really want to go to this and it’s on my list but too many unknowns right now (and no, it would not be a new state…)

Summer races: I expect to race in Michigan, Minnesota, and Wisconsin, which leaves me exactly one state to figure out before September… and in the end I’ll gain 8 new half marathon states.  (Purple = half marathons finished, Yellow=2016 states (NY won’t turn yellow for some reason LOL), White=I’ve run a non half marathon race, BlueGreen= I’ve never raced there…) 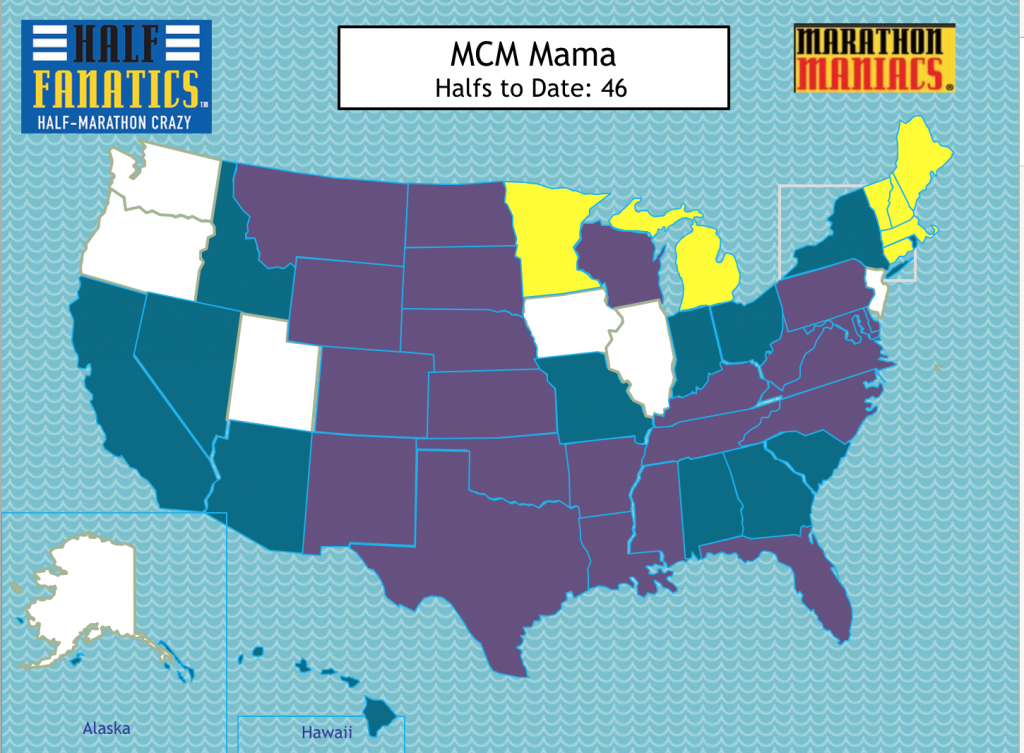 Because once I hit September, all of my training will be leading up to my December ultra. ‘Cause it totally makes sense to train for an ultra when you don’t actually run a marathon that year.

What are your plans for the year? Anyone else put their plans on the calendar and gone “uh, that’s a lot of races”? Perhaps I should start training soon…