You are here: Home / Mad Fox / A near perfect weekend
Great weather.

A fun time volunteering at the Pacers 5k.

The best 20 miler I’ve ever run.
Lunch at a brewpub with my husband, father in law, and Shoo.
Really, could my weekend get any better? Yes, apparently it could.

We were invited to a little reception at a brewpub that is currently under construction. Master Brewer Bill Madden will be opening Mad Fox Brewing Company sometime early this summer. We’ve known Bill for a number of years and have followed him faithfully as he’s brewed at a number of local brewpubs. We are beyond excited that we’ll soon be able to drink his beers at his own brewpub. The only negative is that it’s not walking distance from our house. Guess we’ll be taking turns being the designated driver. ;o)
Beer Geek and Bill near a part of the soon to be assembled brewing system 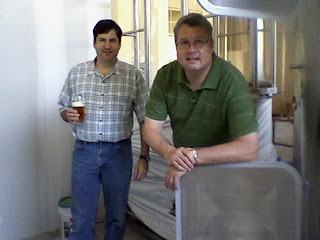 The room where my 40th birthday party will take place.
(What better way to celebrate hitting masters status than hanging with friends at a brewpub?) 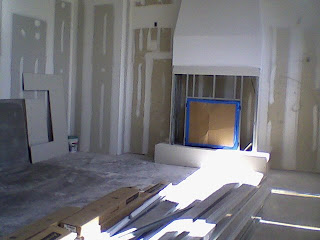 The best part about a reception at a brewpub? Even though Mad Fox is not yet brewing, there was still good beer to be had. Oh, and a glass or a t-shirt to add to the “Beer is Good” giveaway.
Yes, it was definitely a good weekend.