You are here: Home / beer / All Beer, No Running
This weekend was AMAZING!   We went to a beer tasting on Friday night and Savor on Saturday night.  I’ll write a post on each event later when I’ve recovered from too much food, a lot of beer, and not nearly enough sleep.
Here I am all dressed up for our evening out on Friday.  The boys insisted on being in the picture with me. 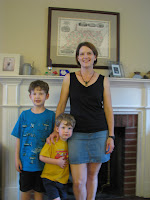 When we got home Friday night, my parents had already arrived and both boys were sound asleep!  The boys had had three different babysitters that night, as we needed to leave before our usual babysitter got off work and then my parents beat us to our house.

After a day spent hanging out, doing yard work and a soccer game with Jones (he scored TWO goals!), Beer Geek and I got dressed up to head to Savor.  Thanks to Hilton points, we had a free night in a hotel, so we took the metro to the hotel, went out to dinner, and then went to the event. 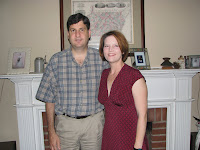 Savor was fabulous!  We’ve gone both years that it’s been held and it’s a wonderful opportunity to meet brewers and brewery owners, as well as sample many beers that are not available locally.
This morning we got up early and caught a cab home.  Our cab ride was an experience I hope never to repeat.  We were driving down Constitution Avenue in DC and stopped at a red light.  A car blew past us on the right, ran the light, and kept going.  After running another red light (and doing quite a bit of weaving), he stopped between intersections.  All of the cars behind him stopped as well because no one was sure what he was going to do.  He then continued down Constitution Avenue, alternately running lights and randomly stopping.  Thankfully, it was about 8 am on a Sunday morning, so the traffic was really light and he was not hit by cross traffic and all of the traffic going his direction on Constitution was staying behind him.  At one point some pedestrians crossed and thankfully it was one of his random stops.  I’m pretty sure they had no idea how close to danger they came.  Finally, he came to a full stop, as did about 10 cars behind and around him.  He had passed out in the driver’s seat!  A number of people had pulled over and were calling the cops on cell phones, so we didn’t stick around, but it was pretty much a miracle that no one got injured, no cars got hit, and hopefully the driver will be fine.  I have no idea whether it was drugs, alcohol or some sort of medical situation like a seizure, but it was definitely one of the scariest car rides I’ve ever been on.
Other than the cab ride, it was an amazing weekend, but I feel like I ran a marathon and a half marathon in the same weekend.  I think I may be getting too old for this. ;o)