You are here: Home / running / August running by the numbers

It’s that time of month again – the last Tuesday of the month. It’s the one where we evaluate how our running/training went for the month. Join Marcia and Patty and me as we talk about the ups and downs of running through August.

I’m going to take a little different approach this month. What do the numbers show this month?

Number of states I ran in: 3 (Wisconsin, Virginia, and South Carolina. I just missed running in 4 as I ran in Colorado on July 30. Maybe I should make sure to hit DC in the next few days…) 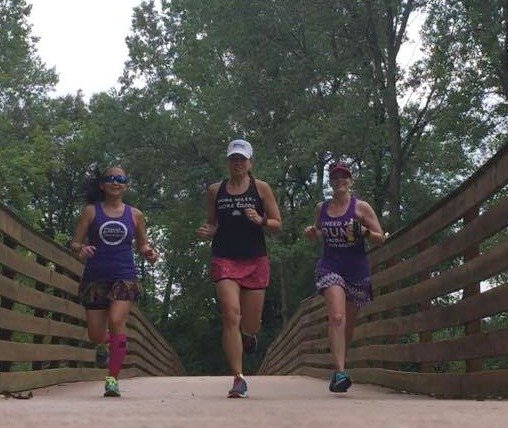 Number of total miles: 131 and counting. I have 3 more runs yet this month. This is the highest mileage I’ve run since May 2016 when I ran 7 half marathons in 7 days. In fact, I haven’t run more than 110 miles in any month since then. No wonder I’m incredibly tired right now. 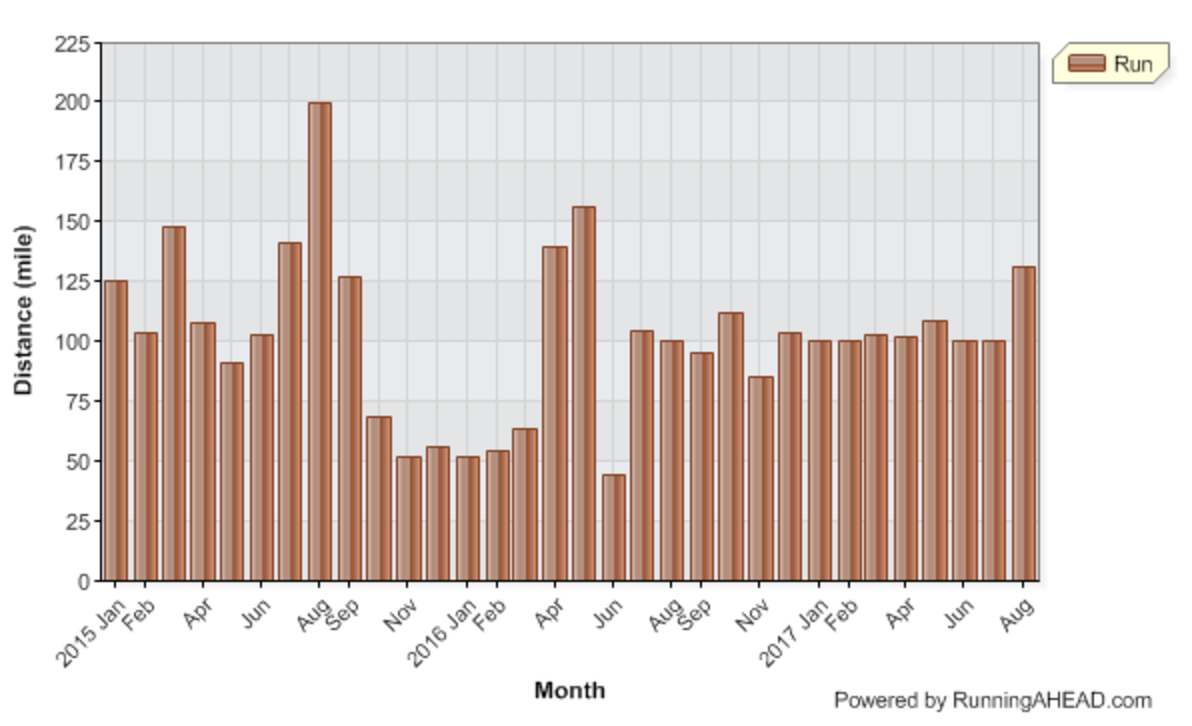 Highest temps I’ve run in: “Feels like” 105*. Unfortunately, one of the times this happened was the day of my 16 mile “run”. Yes, it’s in quotes because towards the end it was more stumble than anything else.

Longest run: 16 miles.  It was one of the hottest days Virginia has had this summer. Probably not my brightest move ever. 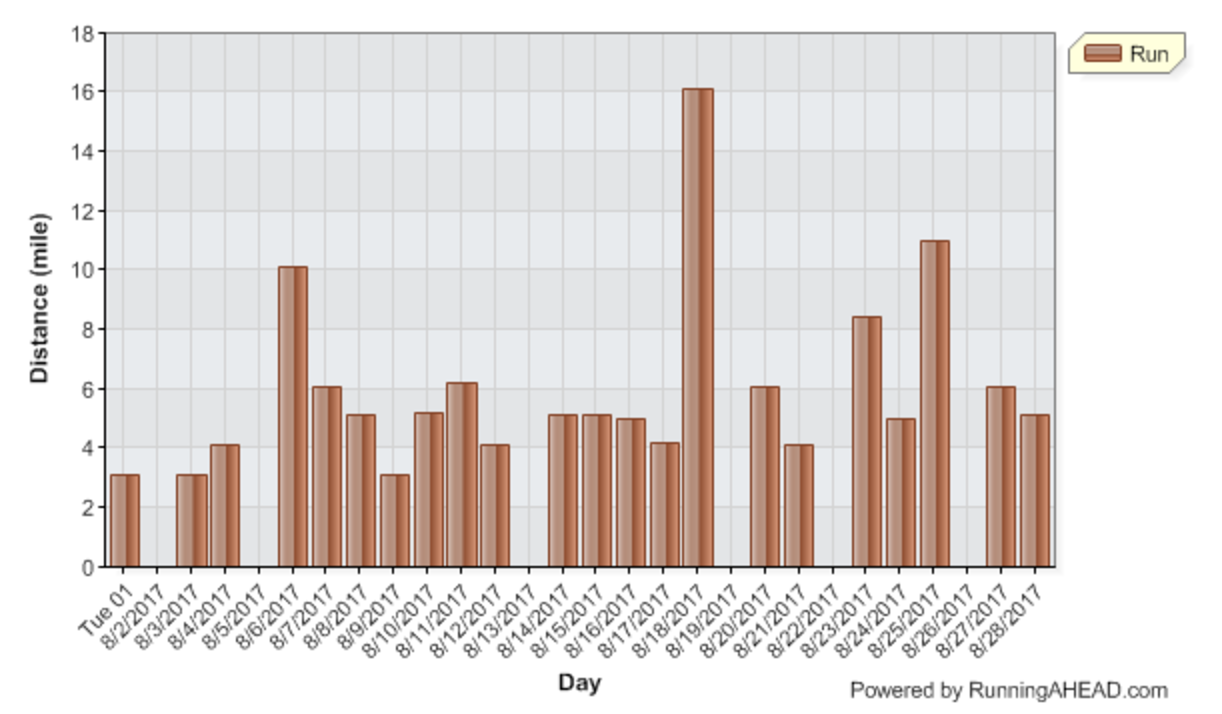 Fastest mile: 9:46. Heat + marathon training means the speed I worked for this past spring has left again…

Slowest mile: Running? Somewhere in the 12s. But there were a lot of Galloway miles this month + a few straight walking miles at the end of long runs. I think my slowest (walking) mile was 18:00. 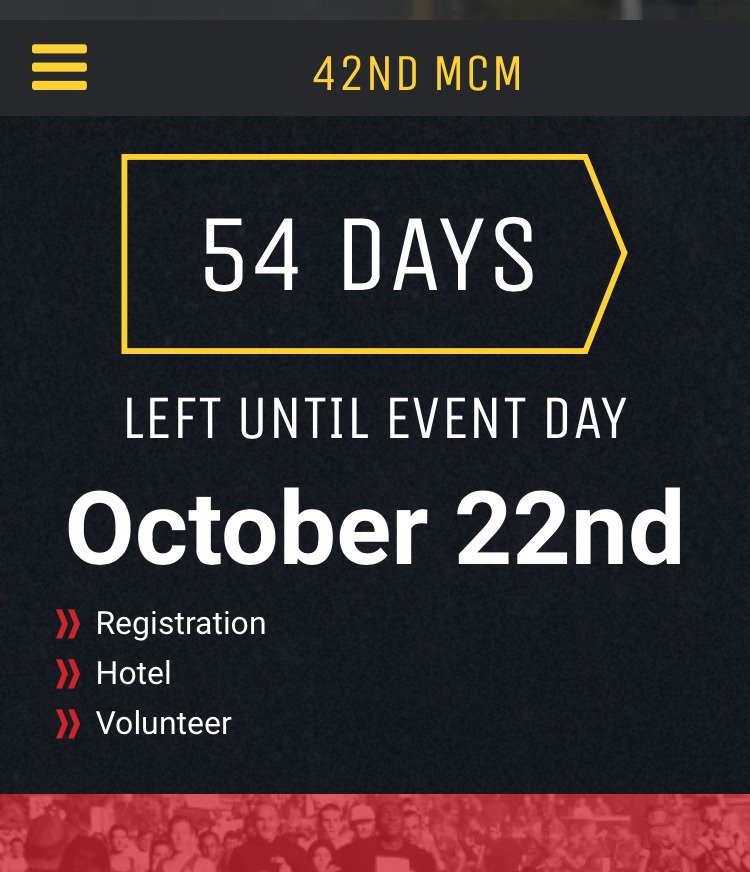 All in all, August went really well considering how not well July went. My energy mostly returned after being sick, although sometimes it’s hard to tell since I’m so tired from all the running. September is the big month for me. Hopefully the races that I’ve added to my schedule (Ragnar DC and Navy Air Force Half) will help me get in the long runs in a fun way.

How was your running month? Are you approaching an A race too?

Don’t forget, we have new topics starting next Tuesday!