You are here: Home / volunteering / Brooks Cavalcade of Curiosities

Last week, Melody of Will Run for Margaritas put out a call on facebook looking for volunteers to work at Brooks Cavalcade of Curiosities. Since I wanted to go over to the expo anyways, I offered to help. Since I have kids in school, I ended up working Thursday and Friday during the day.

While helping out at the expo was awesome, the chance to see both Melody and Miss Zippy was even better. 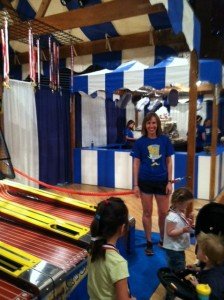 Miss Zippy working the skee ball like a champ!

I was assigned to the giveaway booth both days. We scanned tickets that each person brought in and gave them either a bandana, a beanie or a t-shirt. Every once in a while someone won a new pair of Brooks shoes! (When that happened, I think the volunteers were as excited as the winner LOL.) A few times over the two days, people won head to toe Brooks outfits, but that didn’t happen while I was there. 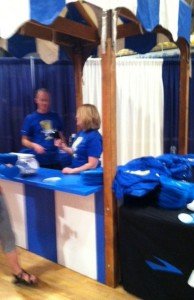 Where I spent both of my days

Every hour on the hour, this guy came out and drew tickets to give away two pairs of shoes. He was amazing. I think I saw him 6 times while I was there and he was always high energy and totally into it. He certainly knew how to work the crowd! 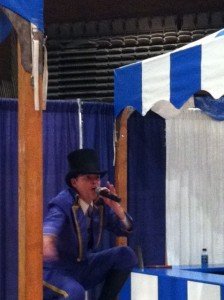 After my work hours, I had a little time to wander the expo. I sampled some yummy treats, talked to the Garmin reps about my ailing 305, and bought myself an ifitness armband (review coming soon). All in all, I had a blast!

Things I learned at the expo:

If you ever get a chance to work an expo, take it!