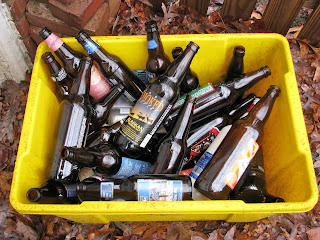 Saturday night we hosted our annual Holiday Beer tasting. We had 10 friends and their children over for a dinner of sausages, picnic foods, and good beer. Unlike previous years where we tasted too many beers, this year Beer Geek chose 10 of our usual favorites*, as well as 5 years of the Alaskan Smoked Porter** to taste. It was quite a yummy event.  (As you can see above, more than those 1o beers were tasted LOL). 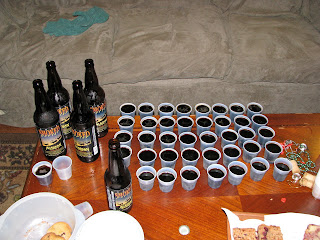 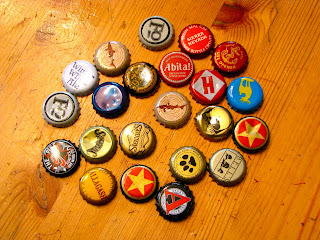 Jones’ beer cap collection from the evening
Water
Today we took the boys to a local park that has a stream running through it.  Thanks to the rain we received last week, the water was pretty high.  The boys sailed some “boats” (pieces of wood and leaves) and tossed a few rocks.  Then we came to a spot where the water was flowing over the low concrete bridge.  Another family was there and their older son had created a dam, so the boys were able to play in the slightly more than ankle deep water.   Shoo ended up so wet that we had to wrap him in a towel for the walk home.  Yay mommy for remembering a towel, although the planned usage was to dry feet, not keep a soaked child warm LOL.  When Beer Geek and the boys headed home, I went for a quick run.  As you can see, I had my Garmin on the whole time.  I discovered that if you forget to turn it off and use your hands while talking, you can add to the distance reading LOL. 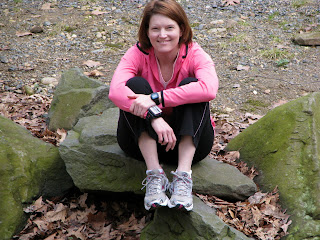 Running
Saturday morning I decided to get my hard run of the weekend out of the way before the drinking.  I know I run well with a hangover, but I didn’t want to risk not doing my planned speedwork.  I wanted to try to do 4x half mile repeats.  I’ve only tried repeats once before, so I wasn’t exactly sure what I was doing.  I figured I’d aim for 4:15, but apparently I’m faster than I realized as I did them in 4:04, 3:55, 3:55, and 4:07.  I think I need to recover longer before the last one as I found it really difficult to get back up to my fast pace at the beginning of the half mile and had to really push myself at the end to come in where I wanted to be.  I had to walk for a minute or so after.  I ended up doing a little over 5 miles.
Today I did a leisurely 3.5 miles.  It was in the low 70s and my legs were tired, so it felt like I was moving slowly, but my splits for the first three were 9:11, 9:04, 8:55.  I was surprised, as I really felt like I wasn’t moving very fast!
All in all it was an excellent weekend.  Now I’m just waiting to hear the reports from Melanie‘s 30K and tfh‘s marathon…
*For anyone who cares, the beers we tasted were: Pike Auld Acquaintance Hoppy Holiday Ale, Lazy Boy Brewery Mistletoe Bliss, Delirium Noel 2007, St. Bernardus Christmas Ale, Gouden Carolus Noel, Elysian Bifrost Winter Ale, Harpoon Winter Warmer, Allagash Dubbel, Alaskan Winter Ale, and Anchor Christmas.  As happens many years, Harpoon was my favorite.
** We tasted 2003, 2004, 2006, 2007, and 2008 of the Alaskan Smoked Porters.  2003 was the bleh, but it’s never been a favorite.   2004 was absolutely perfect.  I have a feeling we’ll be downing a number of those this year, so as to enjoy it when it’s at its best.  2008 and 2007 were too “new”.  They need a few years of aging before they’ll be really good.  As you might notice, we don’t have 2005.  Shoo was born about the time of year that ASP comes out.  Since I’m in charge of beer acquisition in this family, it just didn’t happen that year. :o(