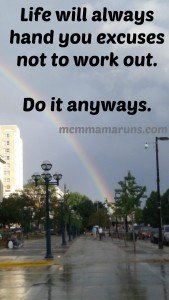 Today, I had a ton of excuses as to why I could not run: A can of shaving cream fell out of the cabinet and landed on my foot yesterday.  When I went to bed last night, I was limping and unable to move my toes. I had trouble falling asleep last night because of some stressful information I got late in the evening. Shoo woke me up at 4:30am and I had trouble falling back to sleep. I then woke up 45 minutes late and was dizzy and disoriented. Shoo had a dental appointment at 10:50, which didn't leave me much time between when I dropped him off at camp and had to pick him up. It's ridiculously hot today, even for Virginia in June. I hadn't taken a rest day yet this week, so I could justify a day off. I had a phone call I HAD … END_OF_DOCUMENT_TOKEN_TO_BE_REPLACED

This week on the Runner's Lounge Take It and Run Thursday, Lindsay from Chasing the Kenyans asked "What do you do to get yourself motivated to run when it feels like it's the last thing you want to do?"   Lately, my motivation has been lacking. I have the motivation to get out there, but I haven't had any motivation to run fast or run far. I'm going to have to find my mojo or just do the runs anyways if I really want to finish the Army 10 miler in under 1.5 hours. Since I haven't run long much this summer, I have my work cut out for me this month.   Here's how I get myself out the door : Put on my running clothes - I know, duh. But really, it makes a huge difference for me. If I have my running clothes on when Beer Geek walks in … END_OF_DOCUMENT_TOKEN_TO_BE_REPLACED

I have been really struggling with running since the marathon. Not so much with the actual running, but with WANTING to run. So many days I just don't. I have to force myself to get out there and do it. In attempt to make myself want to run, I've been participating in a lot of challenges. I'm doing Quadrathon's Swap Beat (lost a few pounds, yay!), Run to Finish's HBBC (28.1 points this week), and even RunnerMom's challenge to weigh the same (or less) on January 1 as I did on December 1. And of course, there's my 1000 mile goal. I'm running, but I've been just making myself do it because I need to. So, why did I actually want to run yesterday and want to do a decently long run. Viper. He's in pursuit of 1000 miles as well and he's … END_OF_DOCUMENT_TOKEN_TO_BE_REPLACED