Normally, when I run a race as part of my quest for 50 states, I really RACE it. That doesn't mean it necessarily works out to a PR or that I even run it well, it just means I push myself as hard as I can. Today's race was not that sort of race. Back in June when Dad and I started looking for a state to pick up this weekend, we chose a 5K in Illinois. Why a 5k (since I've said before that I wanted my races to be longer)? Well, my mom and JONES wanted to do it too. This morning was clear, but cool and windy. We were all chilly as we waited for the start of the race. It was a small race with less than 150 participants, so we all just hung out near the start until the gun and then we were off. Dad took off with Shoo in the running … END_OF_DOCUMENT_TOKEN_TO_BE_REPLACED

Almost quite literally. We got to MN and picked up our packets (Dad and I did the 10k, my mom RAN her first 5K) and then hit a brewpub for dinner. The food and beer at Great Waters Brewery were quite good and then we hit Candyland for a serious chocolate fix. We all went to bed early and I actually slept pretty good for pre-race. Saturday morning I got up and it was warm, but rainy. I ate one of my mom's super cookies for breakfast. It was yummy, but I will never eat one before a race again. It cleared my system like one of those Fiber One granola bars. Ugh. I guess it just had too much fiber for me to handle on race day. We all headed to the race and were there in plenty of time. It was chip timed, but there was no mat at the … END_OF_DOCUMENT_TOKEN_TO_BE_REPLACED 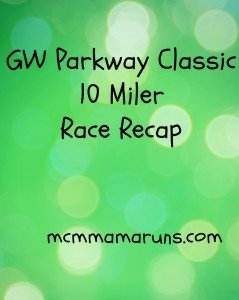 Short story:  I finished in 1:31:03 and PR'd by at least three minutes.  I was around 1400 out of 4000 runners and finished in the top 25% for women and for my age group. The rest of the story: The GW Parkway race begins at Mount Vernon and ends in Old Town Alexandria.  Like many point to point races, this means a shuttle.  I got up at 5 am in order to leave the house by 6 for an 8 o'clock race.  I was already tired (Jones woke up twice and Shoo wet the bed 5 minutes before my alarm went off) and in a fragile emotional state (due to the death of our friend), so when I realized how hot it was going to be, I seriously considered going back to bed. Instead, I took a quick shower, coated myself in sunblock, and had a peanut butter … END_OF_DOCUMENT_TOKEN_TO_BE_REPLACED 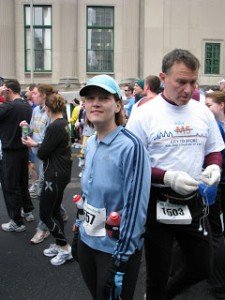 Didja miss me?  Short story:  I ran the Caesar Rodney Half Marathon this morning and finished in 1:59:24.  Woot! More information than you probably care to know: We had an awesome weekend.    We headed up north around 1 on Friday.  After checking in and taking the boys to the pool, we met one of Beer Geek's college friends and her husband for dinner at the Iron Hill Brew Pub in Newark.  They had some really good stuff on tap, including a yummy porter that I had and a stout on a nitrogen tap that Beer Geek had.   We ended up taking a growler of the porter back to the hotel with us. Saturday morning, we got up and I picked up my race packet.  Then we took the boys to the Delaware Museum of Natural History.  They had a blast! … END_OF_DOCUMENT_TOKEN_TO_BE_REPLACED

Marine Corps Marathon 2008 recap, part 3 (MCM recap part 1, MCM recap part 2) Just after mile 22 was another water stop. I drank three cups of Powerade. Really. I thought to myself, "I'm going to regret this when I throw up". I headed into Crystal City. The place was hoppin'! Music, tons of spectators, tons of offerings of vaseline and twizzlers and various things. I got my last Gu in and just focused on keeping moving. And suddenly, I started feeling better. I couldn't move fast because my legs were exhausted and my toes hurt, but I actually enjoyed those miles. Arlington had special mile markers for all the miles in VA, so it was cool to get to see them all. I was able to "run" almost the entire loop back to the water stop. I … END_OF_DOCUMENT_TOKEN_TO_BE_REPLACED

Marine Corps Marathon 2008 recap, part 2. (MCM 2008 recap part one) Just before the end of mile 9, my stomach started feeling off. I felt like I was running with a brick in my belly. Not a good feeling at all! I walked the water stop and tried to drink, but the liquid made me nauseous, on top of the brick feeling. I hit the 15K mark at about 1:35, which was still a 10:13 pace, but I was feeling absolutely horrid. I should have still been fine at that point. 9 miles at that pace in cool weather is usually easy for me. I spotted a set of porta potties with a short line and attempted to resolve the issue. Unfortunately, I still felt like crap and had wasted 6 minutes to boot. My legs felt ok, my breathing was fine, but I desperately wanted … END_OF_DOCUMENT_TOKEN_TO_BE_REPLACED 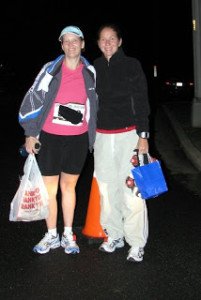 Marine Corps Marathon 2008 recap, part 1 Short story: Clock time: 4:56:25 Actual time: 4:50:14 The weather was projected to be absolutely perfect for the race. Starting temp was low 40s, with the temp at the finish near 65, with a bit of a breeze. I got up at 4:30 am, took a shower, got dressed, ate a PB&J sandwich and proceeded to completely freak out. The topic I decided to stress about? A shirt that races. I had one seam that felt rough and the shirt itself feels more cottony than my normal running shirts and I'd only run two miles in it and...and...and... Just before 6, when we were about to leave, I almost changed out of it. Beer Geek convinced me to wear it and change at mile 2 (where they were meeting me) if it was … END_OF_DOCUMENT_TOKEN_TO_BE_REPLACED