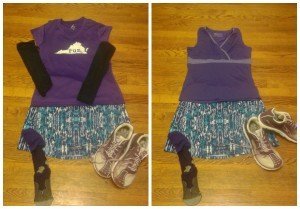 My brain is going about a million miles a minute right now. Too bad I can't run that fast LOL. So, I'm hooking up with Amanda at Running with Spoons again for Thinking Out Loud Thursday. 1. As I expected, the weather here has started to warm up. We are looking at starting temps around 50, going up to 70. The big question, of course, is how fast will it go up that high? I'm hoping not until at least noon since the races start at 6am. 2. The beauty of the Mainly Marathons races is that the course is a loop that you do multiple times (14 for marathoners on the courses I'm doing.) This means I can take off layers as necessary and change things up if needed. As Beer Geek said to another spectator at one of the Riverboat races last … END_OF_DOCUMENT_TOKEN_TO_BE_REPLACED

When Patty, April, and I came up with this topic for Tuesdays on the Run, I really expected that I'd have a lot of races on my calendar.  After all, I ran 13 half marathons last year and 16 half marathons so far this year. One would think I'd stay true to form and run a bunch of races this fall. Apparently not. I'm running Ragnar and then one Mainly Marathons race in October.  I.have.nothing.else.on.the.calendar.  And I'm actually ok with that.  I just need a break.  My mind. My body. My wallet.  All of them need some down time. So, let's chat 2015. I've got big plans again.  No, I won't be running 15 half marathons in 2015.  I figure 17 in 2014 blows the whole trend anyways... On my wish list for 2015: Frederick … END_OF_DOCUMENT_TOKEN_TO_BE_REPLACED

I only have one big event this fall, but it's a BIG one.  In less than two weeks, I'm going to be running Ragnar Relay DC. source 200ish miles from Cumberland, MD to Washington DC. I'm not quite the nervous mess I was before I got switched to Runner 7, but I'm still overly focused on it.  Unfortunately, I'm crazy busy with work right now, so I'm not sure I'm going to get much more actual training done.  I'm just going to have to get in whatever runs I can and call it good.  Instead, I'm going to move onto stressing about the important things, like what to wear and what my leg will be like. Since I've been doing nothing but surfing and reading about Ragnar Relay, I've put together a Ragnar Roundup of great blog posts to help you with … END_OF_DOCUMENT_TOKEN_TO_BE_REPLACED

Or just discretionary spending? I registered for four races in the last month.  The actual races are the remainder of my races for 2013, so are spread over the next three months, but I paid for them all at the same time (AKA the last day of September because prices went up on October 1.) While this particular registration bender was not as bad as some (I did a good job of mixing in some inexpensive races), it did give me pause. Is serial racing a poor fiscal choice?   This is really hitting home for me as I contemplate the races I need to reach Venus.  While I will be doing my best to register early, find local races (or ones where I can crash at a friends' house), and choose smaller less expensive races, it's still going to be … END_OF_DOCUMENT_TOKEN_TO_BE_REPLACED

I rock at juggling things.  I'm really good at multi-tasking.  I may not get things done early, but I don't miss deadlines. But I've decided it's time to set some balls down and prioritize my energy. What I'm setting aside: Training - I had planned to start actively training for my fall half marathons by this point.  I do still plan to start slowly increasing my miles and continue to cross train, but I'm not going to be tied to a plan.  In fact, I'm only loosely tied to which half marathons I'm running this fall.  I still hope to hit 13 halves in 13, but if some of those have to be virtual, that's ok.  Races are not important in the grand scheme of things. Fifty races goal - I ran 5 new states this year.  As of right now, I'm … END_OF_DOCUMENT_TOKEN_TO_BE_REPLACED 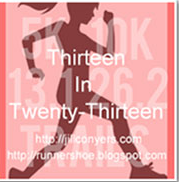 Note to my parents and husband - no, not 13 half marathons, just 13 races. This year I nearly joined Jill's 12 half marathons in 12 months challenge, but thankfully talked myself out of it. Since I spent most of the spring and summer fighting injuries, I was glad that I didn't have any external pressure to run more.  This year, Jill is going for 13 in 2013, but she's offering options for distance, as well as counting virtual races. My choice?  13 races in 2013.  With 5 half marathons already scheduled, I don't see any difficulty in hitting 13 races. Here are my very tentative plans for 2013.. February: Love the Run You're With 5k (1) March: Four Courts Four (2) Dust Bowl Series (3,4,5,6,7) July: Some race in Kentucky … END_OF_DOCUMENT_TOKEN_TO_BE_REPLACED