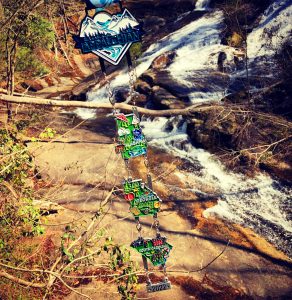 Mainly Marathons Appalachian Series - South CarolinaMarch 27, 20222:47:45 What I wore: hat, tank top, long sleeve quarter zip, capris, and Altra Rivera Location: Seneca, SC (State #41!) Let's just start out with the truth - this race was the hardest of the races and pretty much sucked. I chose to do the early start again because if I didn't there would be no shower at the end. As it turns out, it was a good thing. It was chillier than the previous races and I had some chafing from my skirt from the previous day, so I wore capris instead of a skirt. Upon arrival at the start, we were told that the course was shortened due to construction. On a "loop" course, that just means that you'll be running more laps. But the bad news was that … END_OF_DOCUMENT_TOKEN_TO_BE_REPLACED 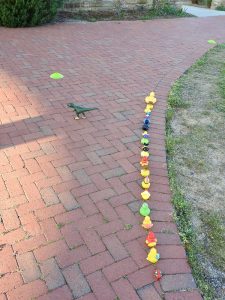 Mainly Marathons Appalachian Series - AlabamaMarch 26, 20222:41:09 What I wore: hat, tank top, a Skirt Sports Lotta Breeze Skirt, compression socks, and Altra Rivera Location: Macon, GA (State #40!) After the race in Alabama, I decided that taking the early start in Georgia made sense. Beer Geek could drop me off and go back to the hotel and then he would not have to wait as long for me to finish when he was done with his 10K. We started off in the dark, which made it hard to tell exactly what the topography was, but it was cool and quiet and a nice first lap. It was 6 laps again and an out and back on a paved surface with plenty of shade. I ended up loving this course and on my second to the last loop, I ran the back half … END_OF_DOCUMENT_TOKEN_TO_BE_REPLACED 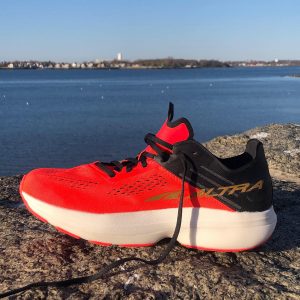 Apparently I only write coffee posts when I'm in Michigan. I guess my body is hard wired to wake up early, but the college kid has no interest in an early wakeup call. I'd run, but it's raining and I did not bring the right running clothes, so here I sit. I'm joining Deb and Coco for another coffee kick off. I'm actually hoping to join one or both for in person coffee soon now that outdoor weather is returning to the area. If we were having coffee, I'd tell you that I had the most AMAZING experience volunteering at the Boston Marathon. I've known for a long time that I will never qualify to run, so I set my sights on getting a chance to volunteer. It was everything I hoped for and more, from running into Brian Beckstead (one of the … END_OF_DOCUMENT_TOKEN_TO_BE_REPLACED 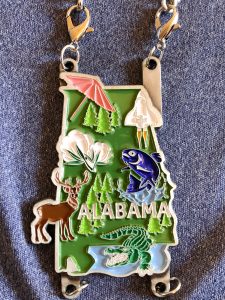 Mainly Marathons Appalachian Series - AlabamaMarch 25, 20222:38:10 Temp: high 40s-low 50s What I wore: hat, tank top, a Skirt Sports Hover Skirt, compression socks, and Altra Rivera Location: Eufaula, AL I've been wanting to run this race for several years, but it used to be a fall series and fall was just too crazy of a time for me to be away from home. Plus, that's hurricane season and all the races seemed to have wicked weather. During the pandemic, Mainly Marathons decided to move this race to the spring and it happened to fall squarely between the boys' spring breaks. Beer Geek and I flew down to Atlanta and drove from there. It was nice to get out for our first kid free vacation since we went to Bermuda in 2020. The … END_OF_DOCUMENT_TOKEN_TO_BE_REPLACED 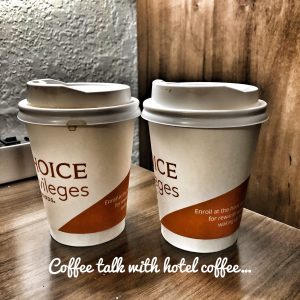 Brrr! March came in like a lamb in Virginia with some warm weather, but I'm up in Michigan getting the kid for spring break and it's definitely not warm here. I'm currently sitting in my hotel room waiting for classes to be over so we can head home, so I figured I'd join Deb and Coco for some coffee talk. If we were having coffee, I'd tell you that I flew for the third time since early 2020 yesterday. My first trip was to Cape Cod to put on the ZOOMA race. Yesterday's trip went so much better! Everything was on time and all the details went super smooth. I'm really hoping that this means airlines are getting their feet back under them. If we were having coffee, I'd tell you that I made a tactical error choosing my hotel for last … END_OF_DOCUMENT_TOKEN_TO_BE_REPLACED 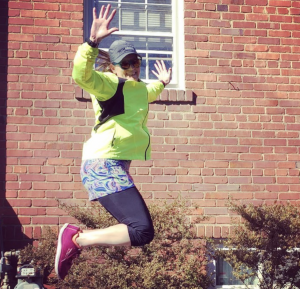 It's been a long time since I got serious about a training plan and even longer since I prioritized my running goals. From work to kids to Covid, I kept finding excuses to not actually put in the training. I did a decent job of training for the MCM 50k in 2019, but that was pretty much my last organized plan. Last week went pretty close to what I planned... Monday - HIIT bike rideTuesday - easy runWednesday - this was supposed to be speedwork, but I was feeling "meh" so I hit the bike for an easy spinThursday - speedwork + full body weightsFriday - easy 5 miles + armsSaturday - 7 mile "long" runSunday - easy 5 miles + leg day I've written a plan that gets me up to 3 10 mile runs in the last week, so I should be good to go for … END_OF_DOCUMENT_TOKEN_TO_BE_REPLACED 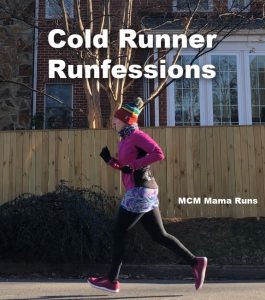 This month has both been about a million years long AND flown by at the same time. I really meant to write more often this month (and actually wrote some posts in my head, which I had not done in a long time), but I never seemed to find time to write. But I have some Runfessions to get out there, so I'm hooking up with Marcia to bare my sole. I runfess that even though we are just turning the Omicron corner here, I'm making plans to travel to some races. Right now we are planning to drive, but I'm hopeful that things will change enough that I'm comfortable flying. I have another Mainly Marathons series in mind - the Appalachian Series. But I runfess that I've BTDT on the 7 races in 7 days thing, so I'm only planning to do the three … END_OF_DOCUMENT_TOKEN_TO_BE_REPLACED 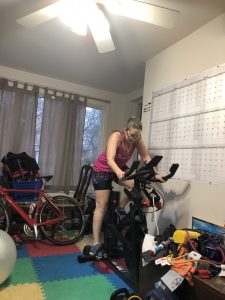 It's hard to believe that it's been 2 years since Covid became a virus "of interest". It was a few more weeks before we started hearing about it and a little over two months before the US shutdown, but the growth had already begun. 2020 went from a year with amazing plans to a year of just trying to make things work in a heartbeat. 2021 has been a different sort of challenge - if 2020 was locked in an escape room trying to get out, 2021 was more like riding a roller coaster. At one point, things seemed to be returning to normal, but then Delta. And then we seemed to be getting that under control with vaccines and boosters and then Omicron. In some ways, the ups and downs have been harder than the consistent down that was 2020, but there … END_OF_DOCUMENT_TOKEN_TO_BE_REPLACED 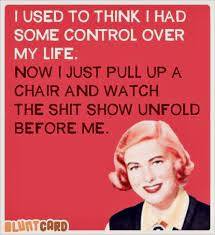 I can't believe that the last time I wrote a post was in late May. My older kid was home, having survived a semester away at school but taking online classes, but the younger one was still in the final (painful) weeks of online school. I honestly don't think I'd given that much as a parent since my kids were newborns. Not surprisingly, when something had to fall off my plate, this blog was it. As we head back towards another school year and a life still heavily influenced by Covid, I make no promises that I won't fall silent again. (But follow me on Instagram - I do manage to post there regularly!) Today I'm joining Deb and Coco (who both are local to me but I haven't seen in person since before the pandemic!) for some virtual … END_OF_DOCUMENT_TOKEN_TO_BE_REPLACED 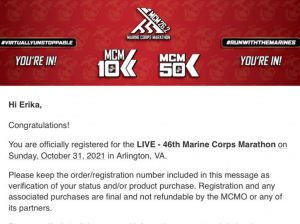 It's been a minute since I even remembered I have a blog. Lately I've found myself on Instagram and Facebook more because, quite frankly, forming more than a couple of sentences at a time has been beyond me. It's not that I'm necessarily busier than normal, it's more that my attention span is spread over more things. The result has been one sentence updates rather than paragraphs, but I'm gonna give this whole runfessions with Marcia a try again. I must runfess that I am over the moon excited that Marine Corps Marathon is going live! I got in right away because I'm an MCM Diplomat (more on that soon), but I would have converted my deferral to live if I had not. I think this may be the biggest sign to me that life is heading in the … END_OF_DOCUMENT_TOKEN_TO_BE_REPLACED 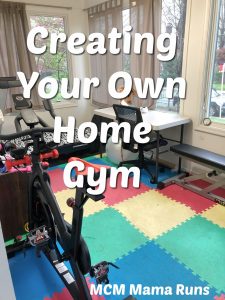 A few years before the pandemic, I decided I wanted to build a home gym. For the first time in year, I had space for one - the kids no longer had "toys", preferring instead to be on electronics or out with friends. I was tired of paying for a gym membership, and even though the gym was less than a mile from my house, I had a hard time finding time to get over there as my work life got busier. And of course, I've been so glad to have it during the pandemic. Here are the five things I use multiple times a week... (This post includes affiliate links) Bowflex bike - This is the newest addition to my home gym. I've had a "deskbike" for years, but I finally bit the bullet and chose a spin bike. I'm not big on attending classes (in … END_OF_DOCUMENT_TOKEN_TO_BE_REPLACED 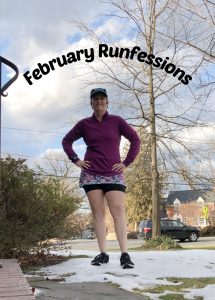 You know how short weeks at work often feel longer than a normal week, just because you still need to do the same amount of work in fewer days? Well, February always feels that way for me and this February was no exception. It's been... a month. I'm joining Marcia to runfess my sins (and maybe do a little "lifefessing" as well.) I must runfess that I couldn't help myself and when Runner's Club registration opened for MCM, I jumped on it. It's currently virtual, but in order to run it in person if it should switch, you have to be signed up for the virtual. I don't actually hold out any hope that an in person race will look like it did in the past, but if Beer Geek and I are both vaccinated, I'll be happy to run any version. Maybe this … END_OF_DOCUMENT_TOKEN_TO_BE_REPLACED