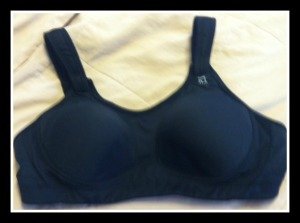 I really wanted to call this post "locked and loaded". LOL I've waxed poetic a number of times about the Skirt Sports Happy Girl Skirt. I LOVE those skirts! So, when Skirt Sports reached out to me to try out one of their new running bras, I jumped on the chance.  I love what they do for my thighs, so couldn't wait to see what they'd do for my "girls". I'll admit that I'm cheap when it comes to running bras.  I've been firmly in the uniboob, smoosh 'em down camp for most of my running career.  When I actually had a rack, thanks to nursing?  I just smooshed them with two bras.  And I was pretty much ok with that. I have seen the light. The first thing to note here is that the bra has shape even when it's not on. It's very … END_OF_DOCUMENT_TOKEN_TO_BE_REPLACED 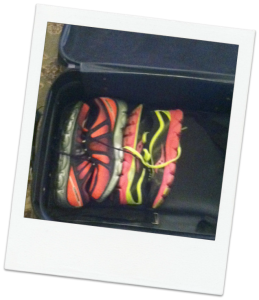 Last night I started packing for the trip.  No, we don't leave for a few days, but I need to be making progress.  For the last 7 years, we haven't gone on a vacation that didn't involve at least a few nights at a house or condo with a washer and dryer.  (I'm kind of in love with Vacation Rentals By Owner.)  I prefer packing light and doing a couple of loads of laundry on vacation. This trip we will be at a different location every night.  Since I'm not a fan of putting my running clothes in the dryer (and I'm not going to have an easy place to hang dry), I went with the new outfit each day option.   Also, I can't risk losing my shoes, so I'm taking a good sized carry on.  This is not the norm for me either. First thing in: my Brooks … END_OF_DOCUMENT_TOKEN_TO_BE_REPLACED 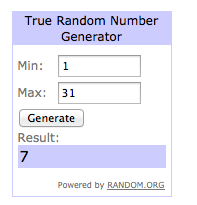 Keep.It.Simple.Stupid I've been embracing that thought as I gear up for the next week.  My mom called yesterday and, thanks to a fare sale, she's going to take Shoo to her house for the week that Jones and I are at camp.  I initially panicked at the thought of trying to pack up Shoo as well as Jones and me, but then I realized she can just throw his tooth brush, his stuffed animal, and some shorts/t-shirts in a bag and he'll be good.  Also, I just need to buy Beer Geek a few tv dinners and he's set for the week.  Win/Win! I trained my last client this morning, so that's one more thing off my list. (I was offered another client to train tomorrow, but I think E heard the panic in my voice and offered to do it himself LOL.)  Now just to … END_OF_DOCUMENT_TOKEN_TO_BE_REPLACED

I've been on a search for a running skirt that works for me for quite a long time.  I've tried on every skirt I could find in my local running stores.  I've ordered a few.  I've even received one to review.  Eventually I found my one true skirt.  The skirt I'll run many miles in.  The skirt that I'll likely run my next marathon in.  (Wondering what I'm talking about?  I heart me some Happy Hour/Happy Girl skirts from Skirt Sports.) Along the way, I found a few nearly right skirts.  Skirts that I could run in without too much of an issue.  Skirts that I thought would be "the one".  But once I found my one true skirt, these skirts were relegated to the under the bed storage.  They haven't seen the light of day in months.  And that's not … END_OF_DOCUMENT_TOKEN_TO_BE_REPLACED

I'm going to cut right to the chase on this one.  I LOVE this skirt!  Seriously LOVE it. This skirt is advertised as a "golf" skirt, but it says it's versatile enough for anything. I'd have to agree. This is the perfect skirt for anyone who wants a little more coverage. I've been "blessed" with substantial thighs. (Note to my German grandmothers: If you were going to share the childbearing hips and the trunklike thighs, could you possibly have given me the boobs too?) I have other skirts. I like those skirts, but this is the first one I've found that I think I could happily run a half marathon in. There's not enough glide in the world to prevent chafing in skirts with just undies under them and anything with a 4-5 inch short is … END_OF_DOCUMENT_TOKEN_TO_BE_REPLACED