Beer Geek has a big round number birthday coming up.  We don’t usually do much around here to celebrate birthdays (or Christmas or Valentine’s day or…), but when asked, he said the only thing he wanted was to be driven around to the three craft breweries that have opened up fairly recently in DC.

This doesn’t seem like that big of a request, right?

Except I don’t drive in DC. Ever.

I did some research and decided that renting a limo made no sense.  There are just too many other ways I can use that money.

So, I put on my big girl panties and I drove my husband and four of his closest friends to DC Brau, Chocolate City, and 3 Stars. 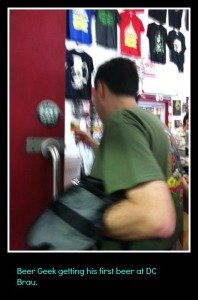 DC Brau has been around since 2011 and is the only one of the three we visited that actually cans and sells it’s beers in Virginia.  (In fact, I happen to have a 6-pack of their Porter in my fridge.)  We tasted everything they had on tap and ended up leaving with a growler of The Citizen (which was a very yummy Belgian style ale) and another one that I can’t remember.  In the spirit of total honesty, I made Beer Geek drive to this brewery LOL. 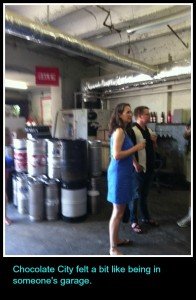 Beer Geek made me drive here, but thankfully, it was not only easy to get to, but there was an easy parking spot (I was driving the Pilot AKA the car with a huge blindspot.)  Chocolate City blew me away with their Silver Fox Lager.  I tend not to like lagers and I’m not usually a fan of not so malty beers, but this beer was awesome.  We bought a growler of that, a growler of their Copper Ale (which I did not try) and two big bottles of the Mothership (one of which I exploded in the laundry room on Sunday – what a waste of a good beer.) 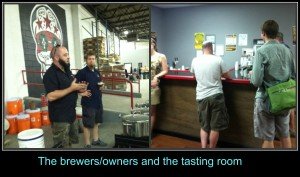 Our final stop for the afternoon was 3 Stars Brewing, where I got to parallel park my big-ass Pilot.  I’m not sure if I’m more proud of myself for driving in the city or for parallel parking in one shot LOL.  At 3 Stars, we went on the tour and actually met the brewer/owner.  I didn’t really learn anything new (we’ve been on so many tours I think my kids could give them…), but it was still fun.  And then, I fell in love with their double IPA.  What???  I don’t like IPAs AT.ALL.  I have one that I like – Mad Fox’s Orange Whip.  But now I have another.  Shocking.  We left with that and a growler of their Citra Saisson.

And then I drove us home.  I thought I was going to have to go the route of my nightmares, but “Yelling Lady” AKA our GPS took me Rock Creek Parkway.  Thank you, Yelling Lady, Rock Creek is easy.

We had a fabulous time touring and then came home and drank the fruits of our labors.  Thankfully some other friends joined us…

What?  You don’t drink your beer out of a Rescuers glass???

And the winner of the Spartan Race Giveaway is…

Congrats, Seth! Email me at mcmmamaruns at gmail.com and I’ll give you your code!