You are here: Home / Ragnar / Five lessons learned at my first Ragnar

Since the topic that Cynthia, Mar, and Courtney chose  for this week’s Friday Five, Fall Favorite Activities, is one I’ve already written about, I thought I’d share with you five things I learned from running my first Ragnar.  (Yes, I promise that I’ll stop talking about Ragnar. Soon.  But I may already have a second one in my sights…) 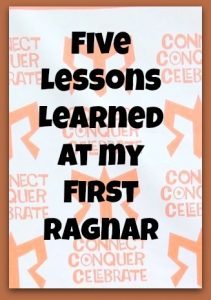 1. Trust the Ragnar calculator.  These guys know what they are doing.  I (and most of my van) put in our solid effort paces for our 10K pace.  The calculations were nearly spot on for the majority of the runs.  We spent way too much time before the race worrying about them.  (And if you follow #2, this won’t matter that much anyways.)

2. Text or call early and often.  Every time a runner leaves an exchange, text the other van.  Use multiple cells on different carriers if need be.  This is particularly important if you are in areas where the coverage is awful.  I spent way too much time waiting at my first exchange because we had no idea when to expect our runner.  So, I ended up starting that run already hot and hungry.  (A combination of 1 and 2 will get you to the right place at the right time.)

3.  Get to the next exchange first, then do what you need to do.  We had a few times where we cut it pretty close because we didn’t get moving as soon as the runner coming into the exchange got to the van.  You really have less time than you realize.

4. Know where the food is!  We were in rural (extremely rural) Maryland for much of our Friday.  If we had found some food options before Ragnar weekend, it would have likely meant a healthier, less tummy upsetting meal on Friday night.  Plus we would have known that exit we pulled off at was a tricky one – food wasn’t actually anywhere near the exit…

5. Take advantage of any indoor plumbing options that arise.  Shower when you can.  Brush your teeth when you can.  Use every real bathroom you see. ’nuff said.

All the rest is in the details:

Yep, all I had clean at the end were four pairs of socks. 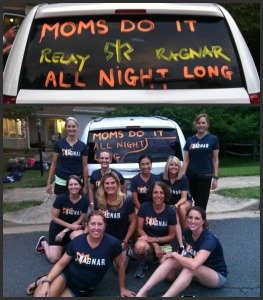 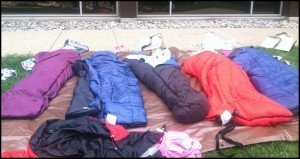