Every once in a while I make a smart running decision. Not often. Given a choice, I usually choose to run.  But given my A goal is 8 days away, I decided not to run  Four Courts Four Miler this year, even though it’s one of my favorite races.

So, I volunteered instead.  I love Pacers Events: the races, the people, the fun.  I’ve been one of their Ambassadors since they started the program and I even work for them on occasion (for example, the Nike Women’s Half in April).  For them, I’ll get up at o’dark 30 even when I’m not racing.

Since it’s a St. Patrick’s day themed race, I dressed for the occasion! 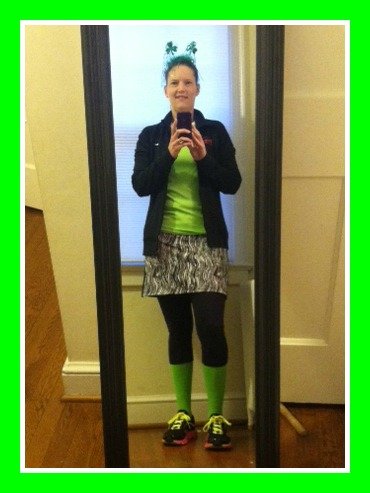 (Just as an aside, I wore a separate pair of capris with my Happy Girl skirt and it worked well.  The extra warmth was nice while standing around in the cold!)

Before the race, I worked bag drop.   I work this station nearly every year for this race and it’s always insane right beforehand. But I love working it.  So fun!  I actually even met someone who reads my blog!

Right before the race, I headed out to the finish line.  I was in charge of making sure we had volunteers to hand out the “Beat the Leprechaun” premium.  The leprechaun starts about 10 minutes AFTER everyone else and tries to pass as many people as he can.  If he doesn’t pass you, you get a special item – this year it was a coozie.    This year’s leprechaun was wicked fast though.  I heard a rumor that he passed more than half the people!

All in all, it was a good time with good people.  Then I ran the 1.5 miles home. (And, as you know, if you are dressed to stand around at a race, you are going to be way too warm running…)

My only injury from the race?  A lost Shamrock.  I’m so sad. 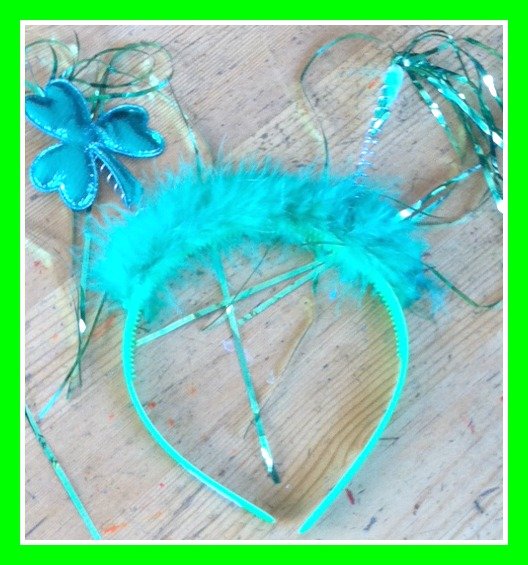