I don’t have my 2008 goals on the blog, as I didn’t start blogging until May, but I wrote some on my livejournal account. I wanted to run a half marathon and a marathon. I don’t think I realized at the time what I was getting in to, but I did accomplish both. So for 2009, I want to: 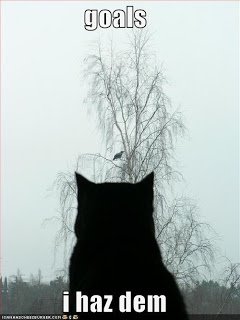 1) Run at least three half marathons, with the eventual goal of a sub-2 hour half. The sub-2 might not happen this year, but it won’t be for lack of trying. I’ve already signed up for the Citizens Bank Caesar Rodney Half Marathon-2009 in Wilmington, DE. I’ll do a local one for the second (not sure which one yet) and then hopefully find one we can travel to in the fall for the third.

2) Run races in at least three new states (but I’m aiming for 5). First up is Delaware, then likely Florida, and then Maine. Minnesota will happen if we can find reasonable plane tickets and Wisconsin is pretty likely as well.

3) Workout five times a week. I ran more frequently in December than I have in a long time. I liked the way it made me feel. My average mileage per week didn’t go up hugely (mostly hanging around 20 per week), but it felt good to workout more often. I’m going to aim for four runs and one cross training workout, but since I don’t have easy access to any options besides running, it may be 5 runs a week a lot of the time.

4) Stop stressing about my weight and start lifting weights. My weight has basically been the same for the last two years. I’ve dropped a few pounds a few times, but they always come back. When I’m eating mostly healthy and working out a reasonable amount (or eating a lot and training for a marathon LOL), my body stays in a four pound range. To get below that range takes more than I’m really willing to do. So, I’m going to try to accept that number and start trying to build some muscle. I’m starting with a goal of 5 minutes a day, rotating between upper, lower, and core. Since I do nothing now, I figure that’s a start and if I can make it a habit and do more per day, great. If not, it’s still an improvement.

5) Run at least 8-10 races this year. My schedule at this point:
March – Half marathon in Delaware
May – local 10k and possibly the MC Historic Half (I’ll have to decide soon on this as registration opens on January 7)
August – Beach to Beacon 10k, assuming I get in
October – Run for the Apples 5 miler and hopefully a half marathon somewhere
November – Turkey Trot
December – I’d love to do the Girls on the Run 5K again

I’ll fill in with some local races that have yet to set a date, hopefully some trail races, and whatever else strikes my fancy. :o)

I ran a decent three mile run today. It was practically balmy outside (50 degrees) compared with the weather in Wisconsin. It felt a bit harder than normal, but I’m guessing that had something to do with either all the treadmill running I did in Wisconsin or the sudden lack of running for the last few days. Now I’m off to find a training program for the half as I probably need to get moving on that.