This past Sunday I finished my 5th Marine Corps Marathon. Going in I knew it was going to be a challenging race. Thanks to my heel, I was undertrained. Not only had I not done much in the way of long runs, I had completely lost my strong base that I’ve had for the last few years. But I wanted this race and I was pretty sure I could finish if my heel cooperated. I admit I was feeling a little bit bitter about the near perfect weather and the fact that I was not in shape to run a PR. But I was given the opportunity to run to honor a fallen soldier and that pretty much led to an instant attitude change. After that, everything else was just the small stuff. 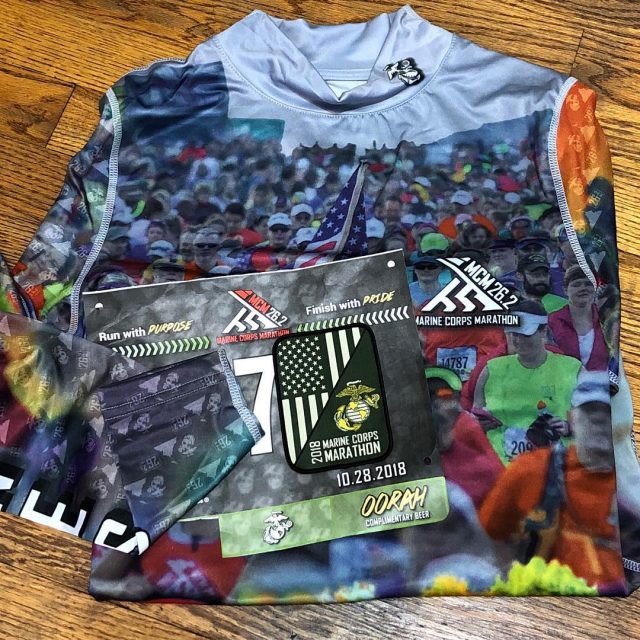 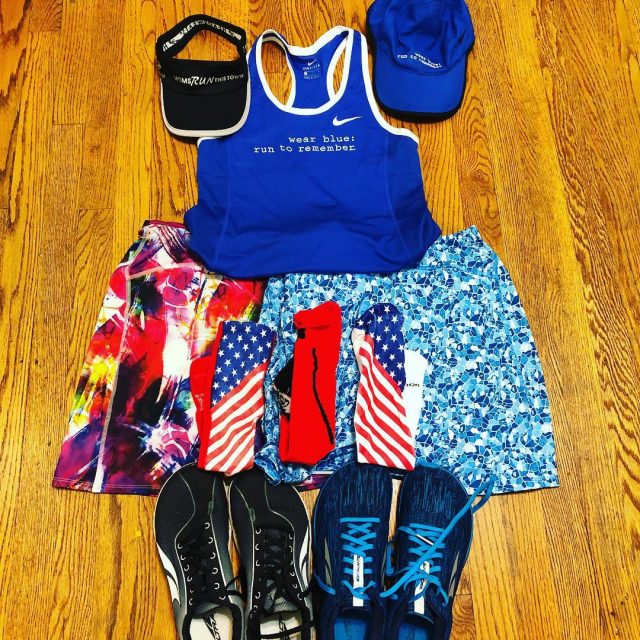 Beer Geek dropped the usual group off at 6 am. This is one of the few times a year our Honda Pilot actually is needed. We breezed through security and headed to the 5:30 pace banner as a meeting place. It was a little chilly, so I was glad I brought a sweatshirt and sweatpants to throw away. 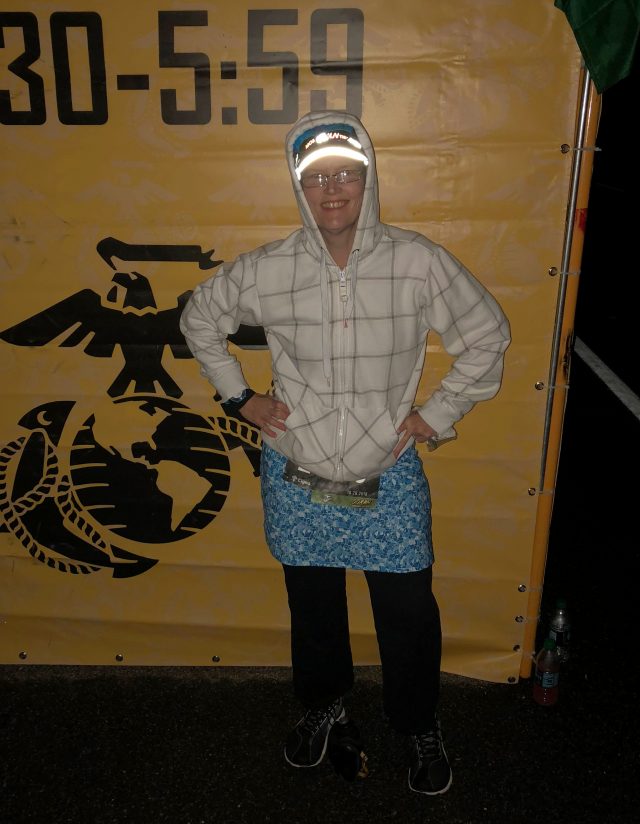 I hung out and chatted with friends and ate my breakfast. I also hit the portapotties a ridiculous number of times. I was apparently well hydrated. 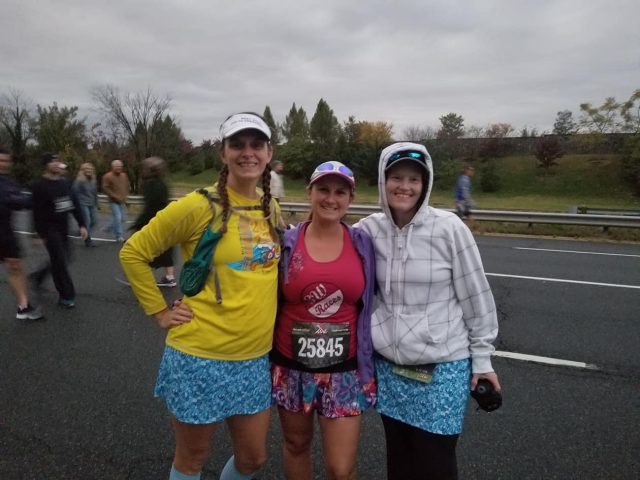 I watched the parachutists come down, listened to the National Anthem, and peeled off my long pants. I had decided to start the run in my sweatshirt. I realized I needed to hit the potty one more time, so quickly raced to do so. Coming out, I ended up hopping into the masses as things started moving and crossed the start line at 8:00am.

Somehow I ended up in a relatively uncongested place (comparatively speaking) and was able to mostly maintain a steady pace through the first few miles. I only dodged when I absolutely had to and walked one teeny portion of the hill up Lee Highway. As we turned onto Spout Run, I was feeling pretty good and had settled into a steady pace around an 11 minute mile. My plan was to try to maintain around that pace for the first 10-12 miles. Those miles turned out to be relatively uneventful. I maintained my pace, walked every water stop and drank Gatorade at each stop. I also had a piece of an orange around mile 7. 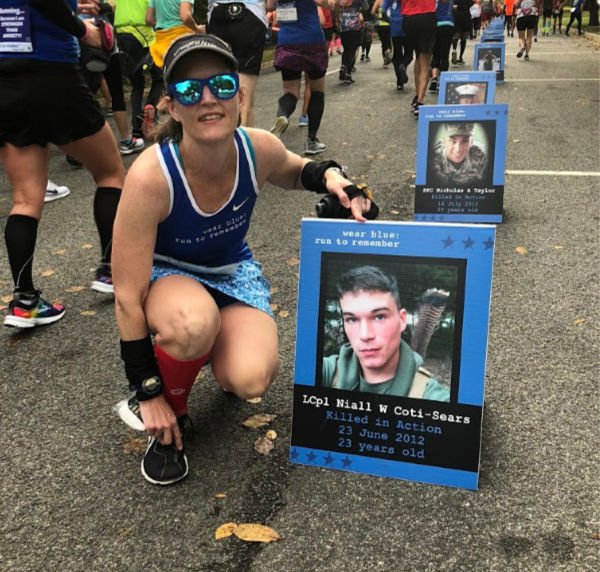 Finally, around mile 12, we entered the Blue Mile. I always get emotional on this mile, but it was particularly hard to not fall apart this year. I wanted to take a picture with the sign for the person I was honoring, so I looked at every single sign. I stopped and took a picture with the sign and then headed towards the flags. It was at this point that I began adding in walk breaks. I had successfully run my plan of a sub 12 minute pace for the first half and completed that in 2:29:26. I was under no illusion that I was going to maintain that pace for the rest of the race.

I continued running at my previous pace, but with the added walk breaks, my pace began edging up into the 12s and then the 13s. I was in a great place mentally, but slowly the lack of training was beginning to take its toll on my body. I was also beginning to chafe under my arm and availed myself of one of the sticks of vaseline that was being offered. I eventually realized that pulling my arm sleeves back up solved that issue. 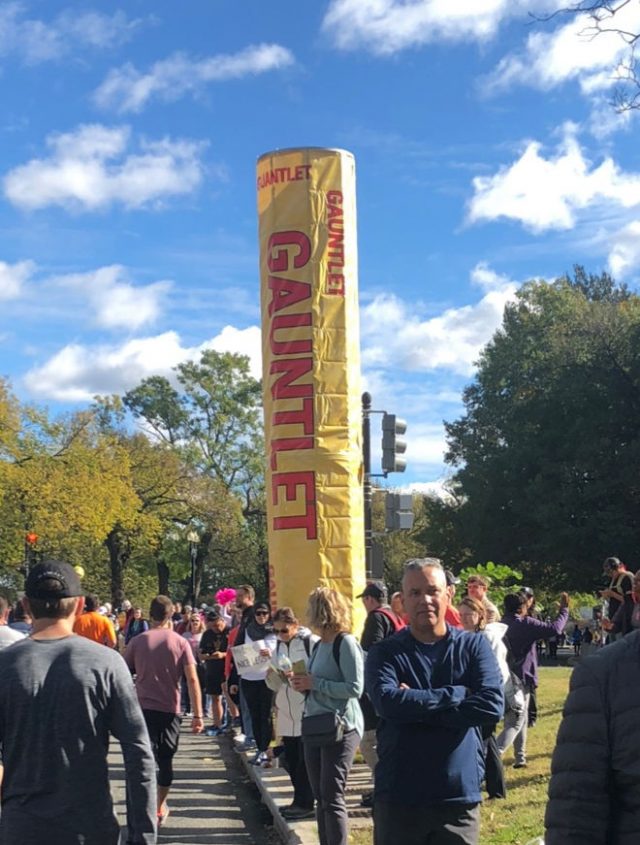 With an hour to spare, I finally passed the first Gauntlet at mile 17. At that point, I knew that I was likely to finish. As I neared the 18 mile point, I passed the massive collection of portapotties from the 10K start. This is the only place in the entire race where there are not long potty lines, so I took advantage of a quick pitstop. And then it was onward to the bridge.

I “Beat the Bridge” with about an hour to spare as well. I was still feeling pretty good, but I was tired and my hip was starting to ache. I don’t love the bridge – so boring and desolate feeling, even though you are surrounded by other runners. But compared to 2017, it was a pleasure. I continued to run as much as I could, but my run was getting slower and convincing myself to transition from walking was getting harder and harder. I was also beginning to experience cramps in my calves, ankles, and knee. 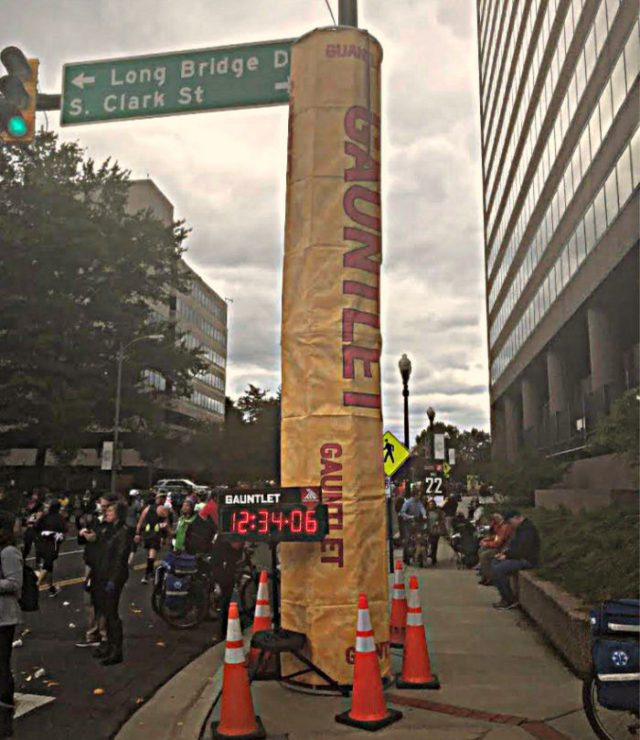 Finally we headed into Crystal City and I passed the final gauntlet with an hour and 15 minutes to spare. I could walk the rest of the race and still finish. Crystal City is party central! MRTT had a table and I got a couple of cups of coke. 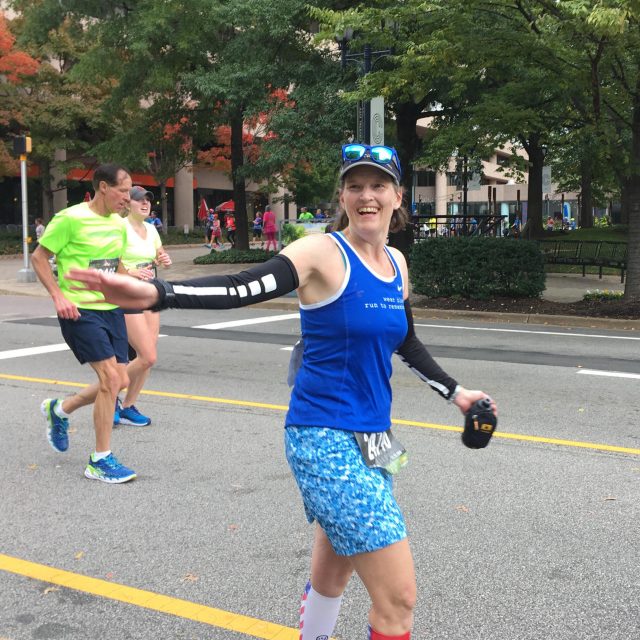 I got hugged by several friends and ate a couple of chocolate snacks. In retrospect, I should have sought out something salty. I was continuing to experience cramping and the cramps in my left leg were so strong that they were pulling my foot to the side. Whenever that happened, I had to walk because I was afraid of tripping over my own foot. 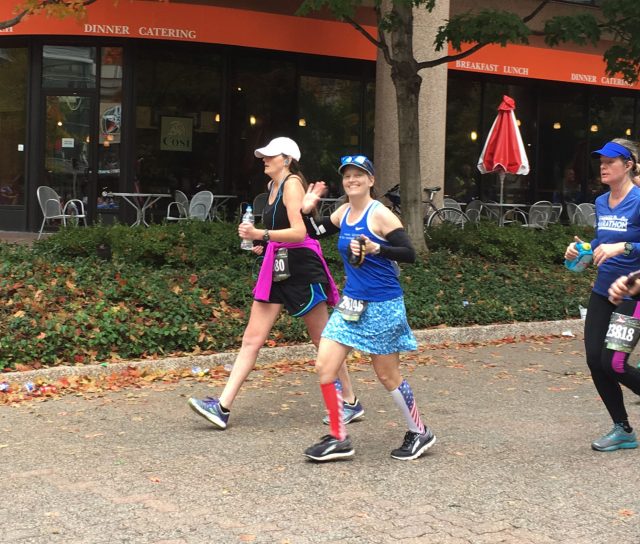 As I headed back out onto the highway towards the finish, my run had become more of a shuffle than a run, but it was still faster than walking. When I wasn’t cramping, I ran as much as I could. I knew that the finish was coming soon, but it just wasn’t coming fast enough. Finally I turned onto the hill leading to the finish line. I managed to do something approaching a run and got up the hill and around the corner to the finish line. Boom! Marine Corps Marathon #5 DONE! 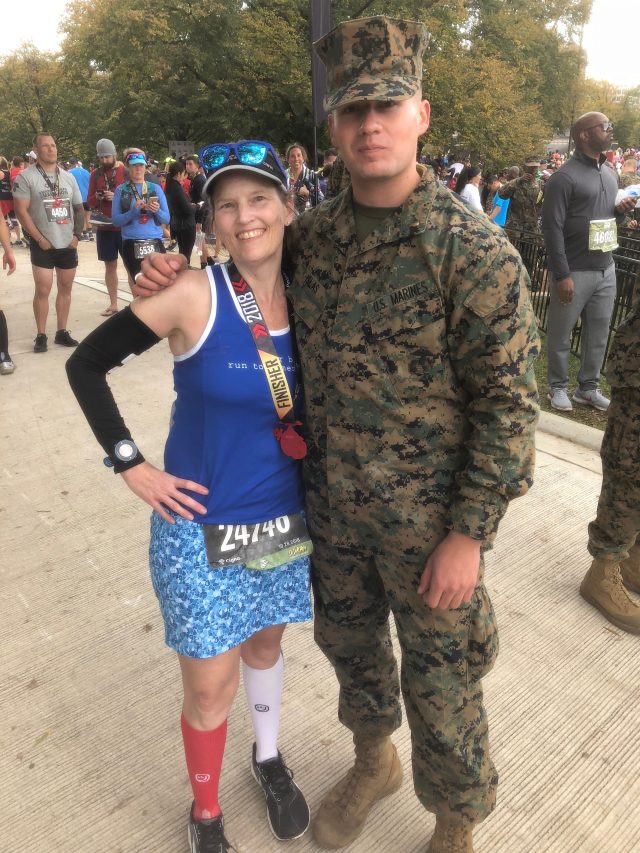 I got my medal and a hug and began to wind my way out of the finish area. It takes FOREVER to get out of there. The runners and the small openings cause congestion, but even more annoying are the spectators who line the area as you exit. It creates a huge chokepoint. But eventually I got out and got my watermelon and met up with Beer Geek and friends. 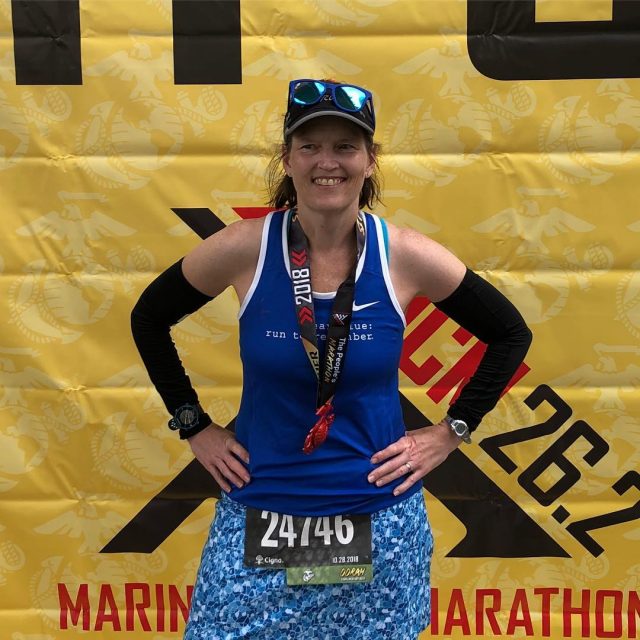 We did our usual walk up the hill to lunch. After lunch, in a concession to my already sore legs, we walked the non-hilly way home. I think that might be a new tradition. 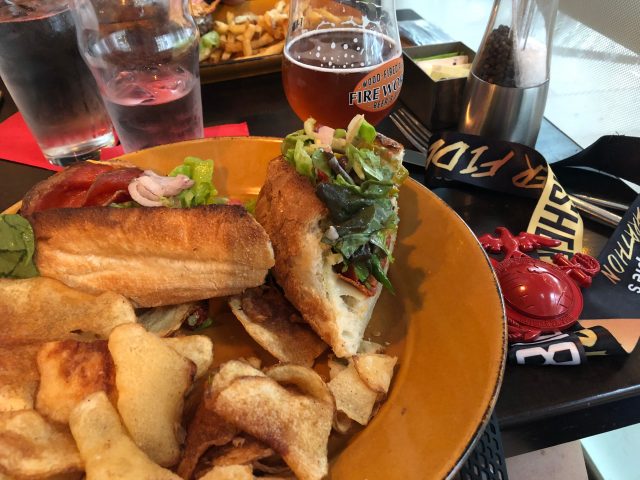 This was not my last Marine Corps Marathon. I love this race, even when I’m not ready to do it. But next year I want to focus on some other things, so I’m planning to be on the other side, supporting those who are out there. But don’t worry, I’m sure that at some point, FOMO will hit again and I’ll be back out on the course. And now I’ll have the entry through Runner’s Club that will allow me to do that! 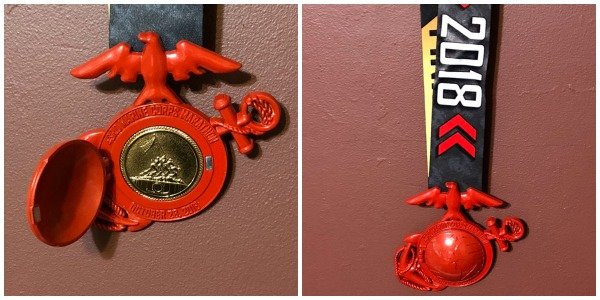 If you’d like to read about my previous Marine Corps Marathon races, here are the recaps: