You are here: Home / volunteering / My crazy awesome weekend

I knew this weekend was going to be a little crazy, but we added in a wild card on Friday night that made it just a touch more so.

Friday we went out to dinner at my favorite brewpub aka Mad Fox.  While we were there, the owner mentioned that he was going to put my favorite beer on tap as the “stealth” beer (as in you have to know to ask for it).  I went from “I’m just going to have one beer tonight” to “Let’s take home a growler” in a matter of seconds.  Let’s just say that Emz may have gotten some slightly less than sober texts late that evening.  Good thing she was running all night and I wasn’t disturbing her sleep.  ;o)

Saturday dawned too early and way too bright.  Thankfully, a big bottle of nuun got me pulled together because I had to head out to Fairfax for a meeting for the Girls on the Run race.  It was a good meeting, but the more I volunteer with races, the more I see just how much goes into them!  If it wasn’t for the fact that it would take up many of my weekends and make my own races difficult, I’d be all over looking for a job with one of the local race management companies! 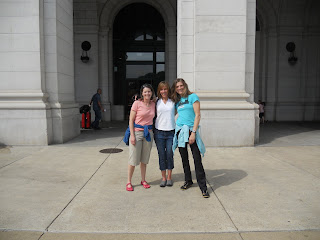 I love that we are all wearing different
versions of minimalist shoes!

After the meeting, I raced home, caught a cab and headed into the city to meet up with none other than AngieB and Miss Zippy!  It was too cool to get to spend an afternoon with two of my favorite bloggers.  We walked around the Mall. (best quote all day – said by a Union Station employee to a clueless tourist who asked if Union station was the National Mall, “Sir, you do realized the National Mall is not a shopping mall, right?” I wonder how many times a day he says that…)  After a little walk in the sunshine, we stopped at a brewpub for a light lunch and some drinks.  Then it was time for Angie to catch her train, so we said goodbye and I grabbed a taxi home.

This morning my boys woke me up with hugs and attempted to make me breakfast.   After a lovely breakfast of coffee and cereal (I obviously need to spend the next year teaching my boys how to actually cook LOL), I’m chillin’ with my computer for a bit.  Later today I’ll get a nice little run in while the boys ride their bikes.

Happy Mother’s Day to all my mommy friends and happy Sunday to everyone else!