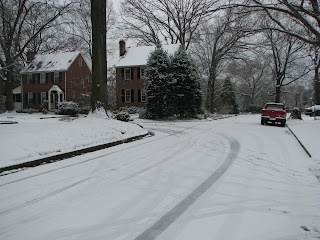 This is what it looked like in my ‘hood this morning. When we woke up, it was snowing and the boys were quite excited to walk to school in it. It continued to snow quite heavily on the walk to and from school, so I was quite surprised we even had school. After dropping Jones off, we walked home and then I drove Shoo to preschool.

Today was supposed to be a long run. I do my long runs on Tuesdays as Shoo is in preschool for 5 hours. I figured I’d drop him off and then hit the treadmill. Thanks to my northern readers, I decided I needed to at least try to run outside. I don’t have yaktrax and my shoes aren’t screwed, but I figured I’d just see how it went. I wanted to do 11 miles and figured that any miles I managed outside would make the treadmill that much more bearable.

Other than the snow coming down and getting in my eyes, it was an awesome run! I felt so hardcore LOL! After about 8 miles, Beer Geek called me and told me the schools were closing early. That meant I had less than a half hour to get to Shoo’s school, before we walked to pick up Jones. Darn! I was really enjoying the run. I ran one more mile, grabbed a quick shower, picked up Shoo and then we walked to pick up Jones.

Jones has a cold, so he headed into the house when we got home, but Shoo and I did some shoveling and snow playing. All told, I walked 3 miles, ran 9 (at an average of a 10:05 pace), and shoveled for about 45 minutes. I’m going to be sore tomorrow!