You are here: Home / running / Not so wordless Wednesday: Jones
Two years ago, Jones started playing soccer. I bought his uniform HUGE, assuming he’d wear it for a few years and pass it down to Shoo. Even though he spent most of his first season running way behind the pack, he’s become quite the soccer player and the uniform has seen a lot of use.
Here he is in the first season (notice the length of the shirt and shorts, as well
as the fact that his shin guards cover his entire shins) 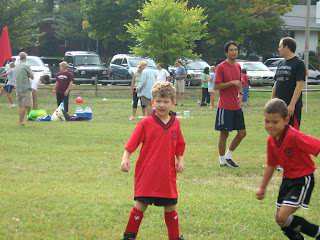 Here he is last spring (notice the uniform fits him…) 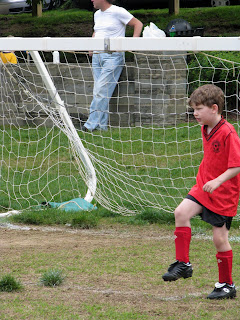 Today, I sent him to the first practice of the season in shorts that would have made a Dallas cheerleader proud, shin guards that only came halfway up his calves, and shoes that made his feet hurt. (No, he wouldn’t let me take a picture). Guess I have some shopping to do before the first game LOL.
While he was at practice, I did a nice 5.5 mile run. I ran a few fast intervals, nearly got run over by a car, got pushed into traffic by another runner, and nearly ran over a rather large lady. Quite the eventful run! That’s almost 10 miles for the week and I’ll run tomorrow, which makes me likely to wimp out on my 10 mile run that I have scheduled for Saturday. Thank goodness Shoo starts preschool soon. I find it much easier, mentally, to run for a long time when no one is waiting for me at home.
Just a couple hours left in the giveaway…