You are here: Home / Uncategorized / Officially 40!

OK, nevermind that my birthday was actually two weeks ago, I am now officially 40.  On Saturday night, we went out to dinner at Mad Fox Brewing Company.  We were joined by my parents, Beer Geek’s dad and step-mom, and a small number of very close friends we’ve known forever. (I realized after the fact that all four of Beer Geek’s groomsmen were there!)  The food was amazing, the beer was yummy, and my dad was the designated driver, so I had a great time.  ;o)  Meanwhile, six kids were back at our house with two babysitters having a huge playdate.   AWESOME! 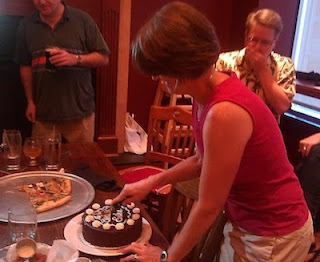 I think the look of fear on my friend’s face has to do
with the huge knife and the amount of beer I’d had…
The rest of the weekend has been quite nice as well.  Saturday morning, my dad and I went for a five mile run.  It didn’t feel great at the beginning and I was definitely having some breathing issues from the allergies, but we managed to run the two middle miles at 9:17 and 9:16.  Sweet!
Sunday, I ended up not running, thereby ending my week with less than 20 miles.  I’ve only done that a handful of times all year!  Oh well, it was a crazy week and my mom and I were on a major organizing spree.  We moved all of the outgrown clothes out of the boys’ dressers, packed away the stuff I’m keeping for Shoo, threw away a huge trash bag full of, well, trash, and packed up several boxes of books, Shoo’s outgrown clothing, and baby blankets to donate.   Sadly, there’s still way too much stuff packed in my very small house…
Today, I get to go on a tour of a local water treatment plant and Tuesday I get to go on a tour of a local waste treatment plant.  I know, I lead a glamorous life.  Yes, I will be blogging all about it over at Metro DC Mom.