You are here: Home / marathon / Pre-race to mile 9 : The glory miles

The weather was projected to be absolutely perfect for the race. Starting temp was low 40s, with the temp at the finish near 65, with a bit of a breeze. I got up at 4:30 am, took a shower, got dressed, ate a PB&J sandwich and proceeded to completely freak out. The topic I decided to stress about? A shirt that races. I had one seam that felt rough and the shirt itself feels more cottony than my normal running shirts and I’d only run two miles in it and…and…and… Just before 6, when we were about to leave, I almost changed out of it. Beer Geek convinced me to wear it and change at mile 2 (where they were meeting me) if it was bothering me. We headed out to pick up my friend Amy and then he dropped us as close to Iwo Jima as he could. 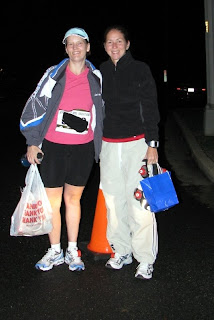 Amy and I were headed for a tent set up by a LRS, but it was just opening and appeared not as impressive as the email sounded, so we opted to head straight for the start line with an hour and a half until the race. Because we were coming from the opposite direction of most runners and we were so early, when we got to the start line, all the corrals were empty and there were very few people around other than the Marines. I wish I’d had a camera with me ’cause it would have been a cool picture. We continued walking down the road in an attempt to stay warm and as we glanced back, the sun rose over the start line and the empty corrals. Wow! That sunrise alone almost made the whole thing worthwhile.

We continued walking around and hit the porta potties a couple of times and then headed into the 4:30-4:59 corral. Amy was aiming for a PR around 4:20-4:30 (which she got! Woohoo!) and I wanted to stay under 5, so we decided to start the race together. The corrals got very full and we both ditched our jackets and tried to stay warm. Finally, at 8am, the race started.

We both crossed the start line at 8:06. The field was packed and it was pretty much all you could do to not step on people (what is up with starting a marathon WALKING? Especially one that has time limits so it’s not possible to actually walk the whole thing?) The first mile was a 10:49 pace and then we started up the first big hill. At that point, Amy and I parted ways as I wanted to stay way left to see Beer Geek, the boys, my mom, and a close friend.

I ran up the hill, waved at my family, and tossed them my gloves. As you can see from the picture, I decided the shirt was fine and kept on running. (Beer Geek ran next to me to try and get an action shot as I got up the hill faster than they expected. He nearly ran into a pole and one of the guys running near me yelled out “yeah, way to take one for the team LOL). 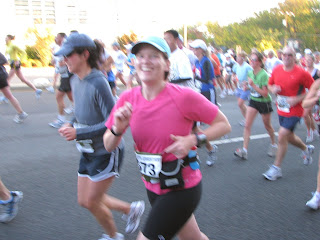 Mile 3 was mostly downhill as we headed into DC. We ran down Spout Run, which was heavily wooded and MANY men took advantage of that. I’m so jealous of the ability to just turn your back to the crowd and pee into the bush without exposing yourself. A few women ran a bit farther into the bushes, but I was feeling no need at that point. We headed up the bridge onramp into an incredible fog hanging over the waterfront. Quite an amazing sight! I hit the 5K mark at approximately 32:30 (my split times are all messed up as they had some issues with the chips. I’ve used my Garmin to “correct” them as closely as possible) and was feeling great. I was running exactly the 10:30 pace I wanted to be doing at that point.

The next 5K were awesome. We ran through a residential area of DC I’d never seen. The crowd support was minimal, but really not needed at that point. We went up the second “big” hill and I was totally unimpressed with it. My thought was, “really? That was the hill?” That was the last real hill of the race. There were a few minor ups and a few onramps, but that was it. I did my first Gu with some water and was feeling good. I hit the 10K mark at a little over an hour. My overall pace at that point was 10:15, but that was ok because we’d had a few fast downhills. Crowd support was picking up and a guy ran past me in a banana suit, so I was pretty amused.

Things continued to go well. We saw more of the fog hanging over the buildings and the sun was beginning to shine through it. I was making decent time and just enjoying the scenery.

Just before the 15K mark, that all changed.