You are here: Home / half marathons / Racing: behind the scenes

I’ve spent a lot of time racing.  I love to do my long run at a race, surrounded by 100s of other runners.  One might say it’s a bit of an addiction.  A few years ago, though, I began giving back by volunteering at races.  I quickly discovered that volunteering is just as much fun as running a race and, while a totally different workout, often just as much exercise!  Since my first volunteer stint, I’ve volunteered many times and had a few chances to be on the paid race crew, such as the Nike half in 2013 and a local 5k.

This past weekend I got to be on the race crew for the Woodrow Wilson Bridge half marathon.  The coolest part was I got to experience a totally different aspect of putting on a race.  This time I was involved with the actual course management, which meant basically the tasks involved from the time when a runner crosses the start line until they cross the finish line.

My role?  I got to put the mile markers out at 4am on Sunday morning.  Know how early you have to get up to put out mile markers at 4am? 2:30am.  Oy.  I really didn’t actually go to sleep on Saturday night. 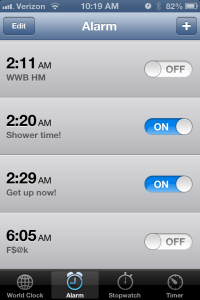 This role starts before race day though.  A few days ahead of time, I had the opportunity to meet with the gentleman who marks many of the courses in the DC area.  Did you know that there are a ton of rules about how to accurately mark a course?  Yes, yes there are.  We drove the course and found each and every mile spot.  I took notes. I took pictures. I found good landmarks to help me remember where the indicators were.

And I was thankful for every piece of information I had + my Garmin 220 at 4am on Sunday morning.  Things look a whole lot different in the pitch black than they do in broad daylight.  (There was only one case of running around on the side of the road with my headlamp frantically looking for the marking.  For the record, I found it.).  Know what I found interesting?  My Garmin (yes, I used it to help us get close to each mark) was spot on.  Funny how not having to dodge other runners helps keep you with the measured distance LOL. 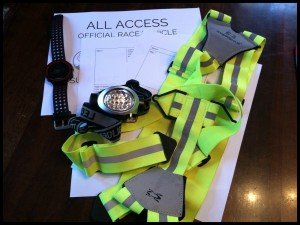 This course had some challenges other courses don’t have – there was a section of the course only accessible via bike or walking.   This meant one of our volunteers actually walked a half mile each way carrying a mile marker sign! And those were not light!

I then spent the rest of the day helping out at the last water stop.  I unloaded a ton of boxes (do you know how heavy a box with 6 gallons of water is???), helped with set up, handed out drinks, cheered on runners, and then packed it all up again.  Thankfully, despite a small number of people, I had an amazing crew and everything went smoothly for us. 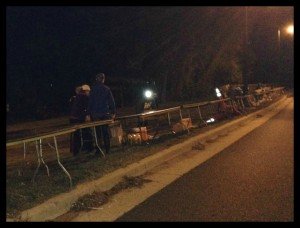 Thanks to one of my MRTT friends for letting me borrow her photo.
I never stopped moving long enough to take a picture of the water stop I was at…

So, the next time you run a race and the mile marker doesn’t match your Garmin?  Realize that someone was out there at O’dark thirty working hard to put it in the right place.  Sometimes mistakes happen (race crew are humans too), sometimes signs get moved by police or volunteers (had that happen at a race I ran this spring where the cops moved the turn around and that messed up mileage for the entire rest of the race), sometimes you’ve just zigzagged too much (I KNOW I’ve done that LOL).  Either way, it’s very seldom the case that every attempt wasn’t made to put markers where they belong.

It was a long day (I worked 8 hours by noon!), I’m sure I looked crazy running around the side of the road at 4am with a headlamp and reflective gear, and I totally forgot to eat, but it was a heck of a fun time!

And I looked good… (Yes, I wear Skirt Sports when I work a race too.) 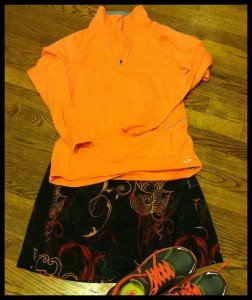