A few weekends ago, I ran Ragnar Trail Richmond on Team No Beer Left Behind. It was a mix of members from my Mad Fox 12 pack team and a few spouses and college friends. It was an incredibly fun experience, but it’s taken me nearly two weeks to recover!

Our adventure started when two of our teammates went down Thursday to grab a camping spot for us. They chose a nice spot and set up a couple of tents and a canopy. Luckily, they also had their RV because there ended up being a big thunderstorm that night (which would lead to a few muddy spots once the running started.) 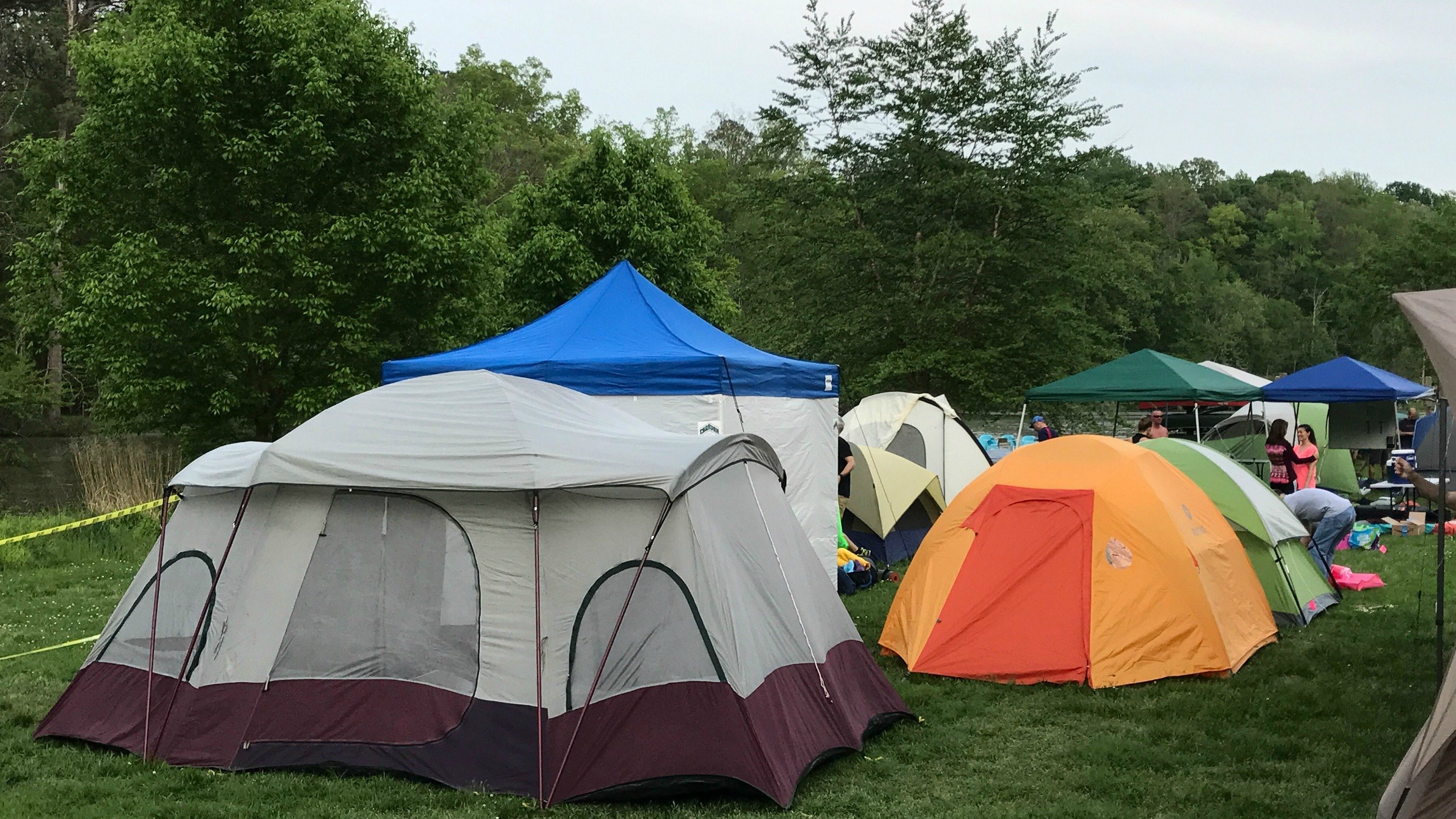 The rest of us headed down on Friday morning with two cars full of gear and snacks. We made good time and had no problem with gear drop. Our camp site was quite close to the road leading from gear drop, but it was still quite a haul to get everything down there. We had a 3 pm start time, so as soon as we finished dropping stuff off, we headed up to checkin, watch the safety video, and request an earlier start due to an injured runner. They moved us up to 2:30pm and it was decided that I’d accompany the injured runner since she wanted to do at least one loop. 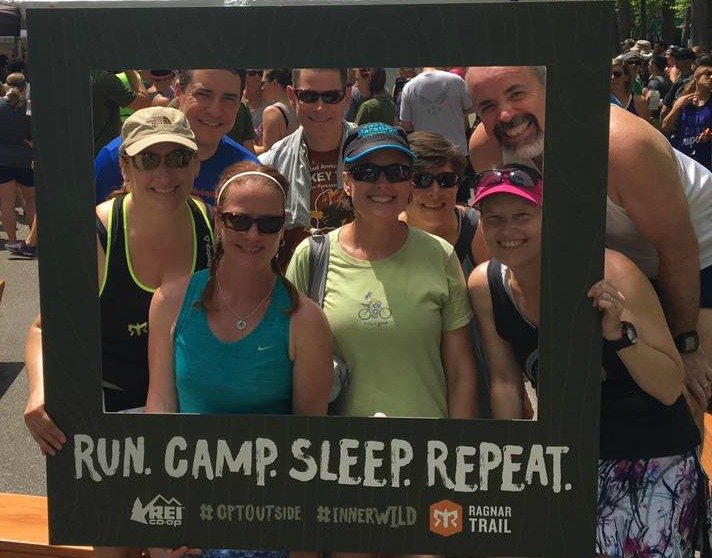 Beth and I set out at pretty much the hottest part of the day on the Green Loop. I was excited to get to do it as I’d be doing it again sometime in the middle of the night. We ran a bit and power walked the rest of it, which allowed me to actually take pictures. 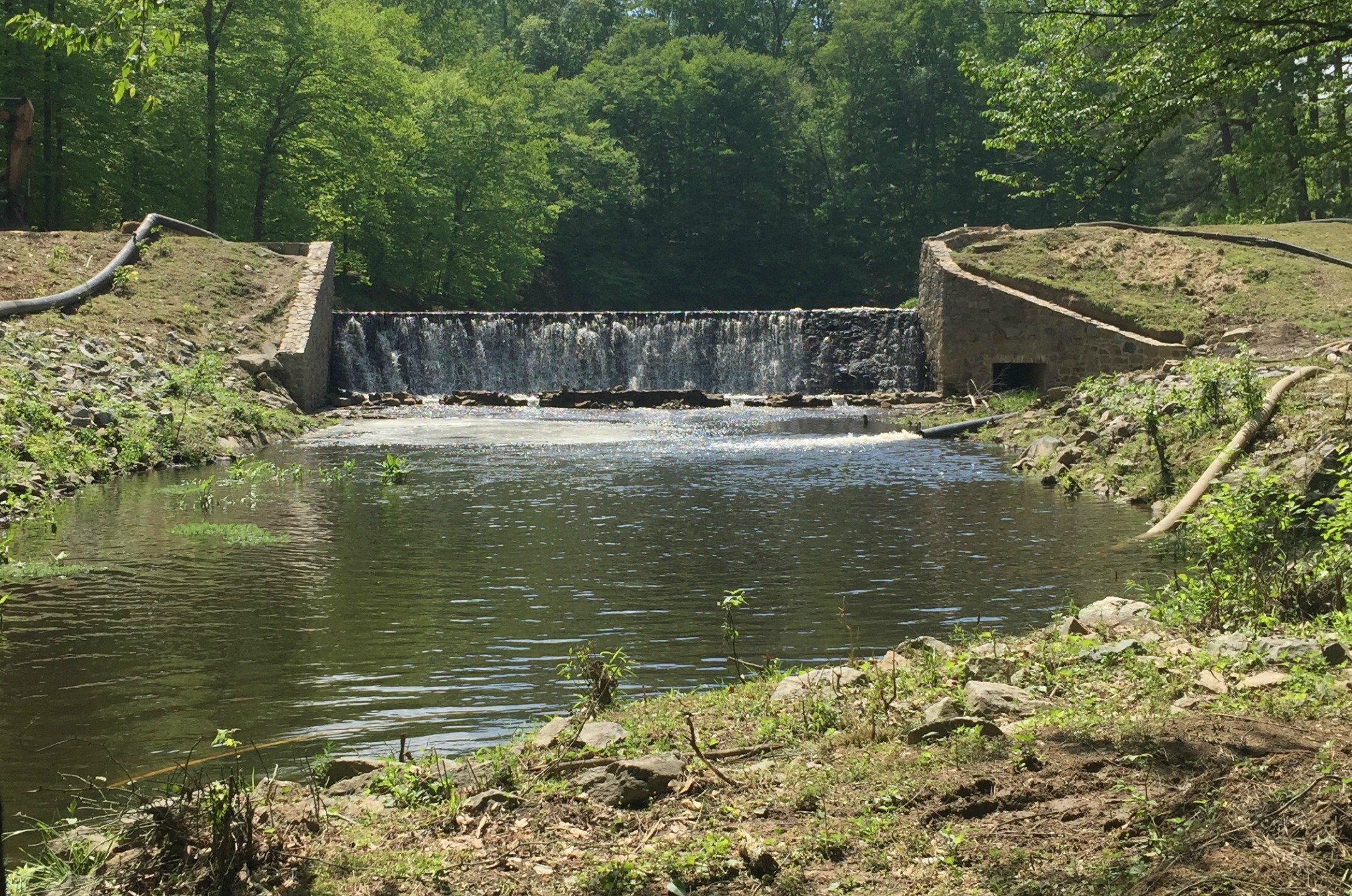 Beth handed off to our next runner and I went to change and have a snack before the Yellow Loop. It was so hot and humid that changing and using my Shower Pills did not actually leave me feeling much refreshed. I should have made an effort to drink more at this point (hindsight), but I didn’t. 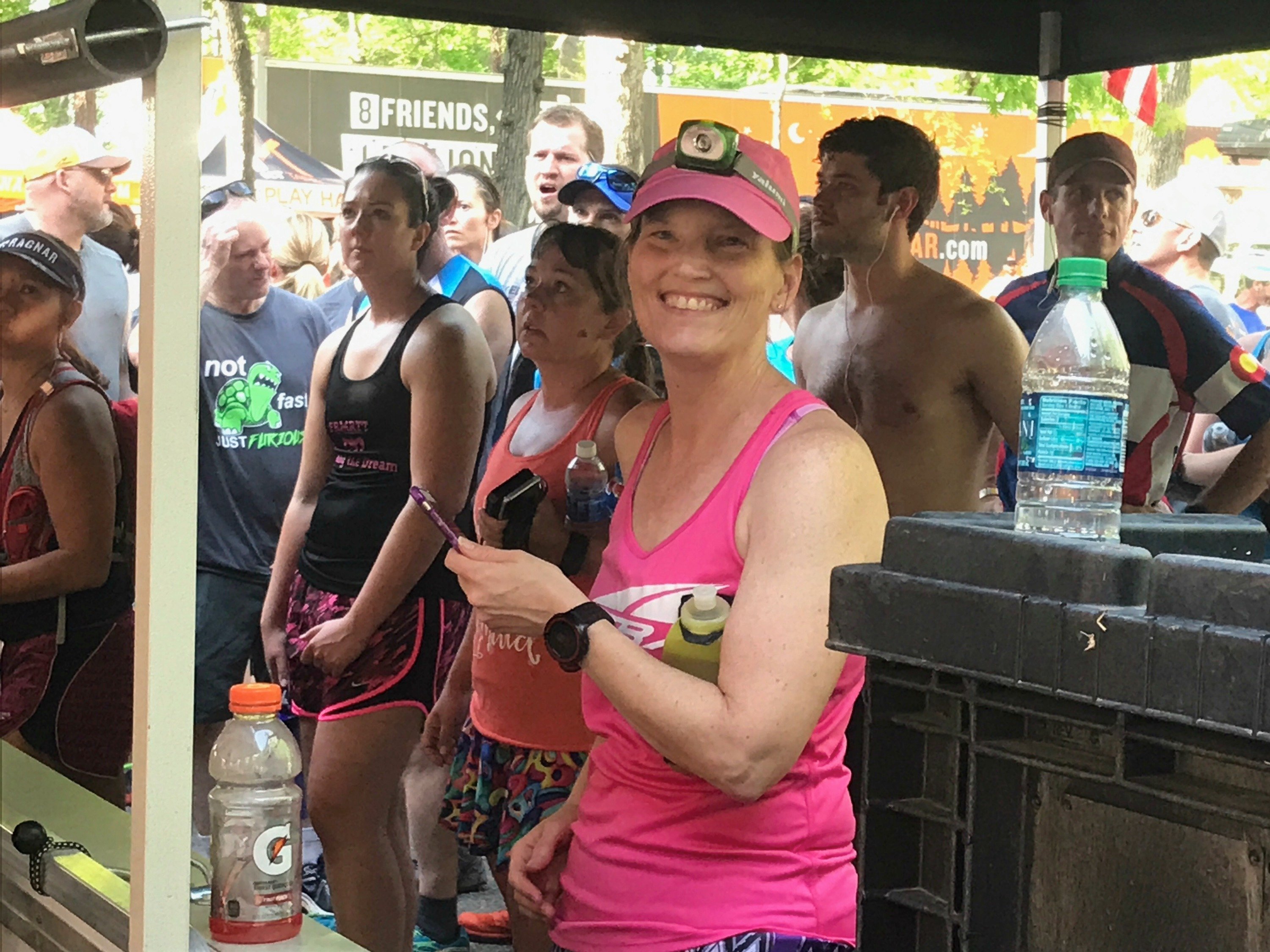 Soon it was time for me to head out as runner #5. My first official loop was the Yellow Loop and it was just heading towards dusk as I started. I took my headlamp with me and was glad as I needed it before I finished. Of all the loops, I found this one to be the most technical. 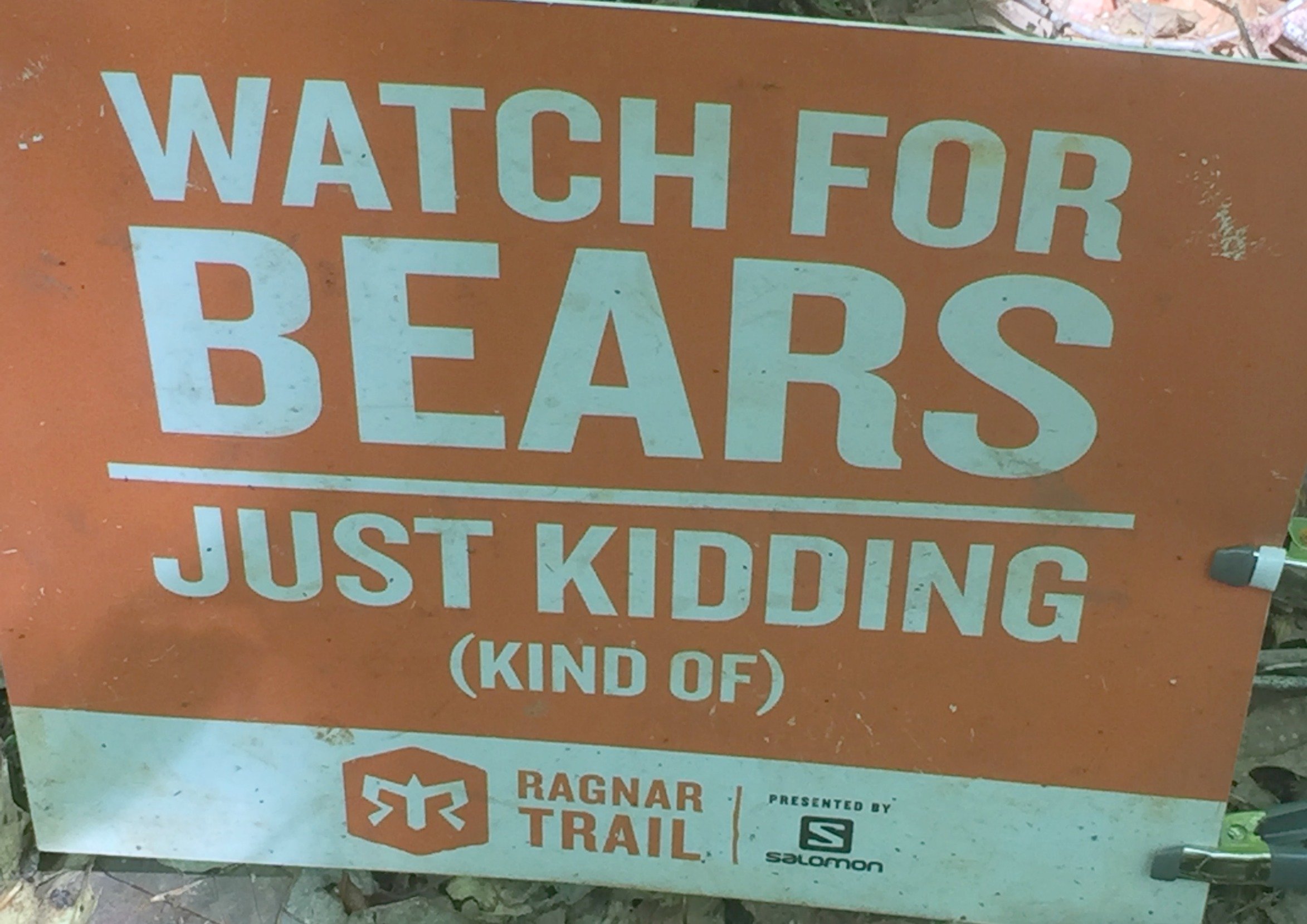 There was a small water crossing (that you went over in two directions) and lots of rocks and roots. It was also incredibly muggy. The combination meant I did more walking than planned, but I did run a good portion of it. This was my least favorite of the runs I did.

After I finished, I knew I’d have a good chunk of downtime. We were all running 2-3 minutes slower PER MILE than we expected – likely due to the heat. I grabbed my free Friday meal – a Philly cheesesteak and fries – from a food truck and then headed back to the camp to change and clean up again. I think this was the point where I actually rinsed my hair with ice cold hose water, but I’m not 100% sure LOL. After changing into some comfy clothes, I grabbed my sleeping bag and two camp chairs and made myself comfortable. While I never slept soundly, I did manage to doze for a while.

Next up was my nighttime loop. I was running the Green Loop again, which was nice because it was the easiest and I was familiar with it. I actually had an amazing run (slow, but amazing). I expected to be freaked out by being in the woods in the dark, but it was actually really cool. I was in a fabulous mood when I finished and the sun was just starting to come up! 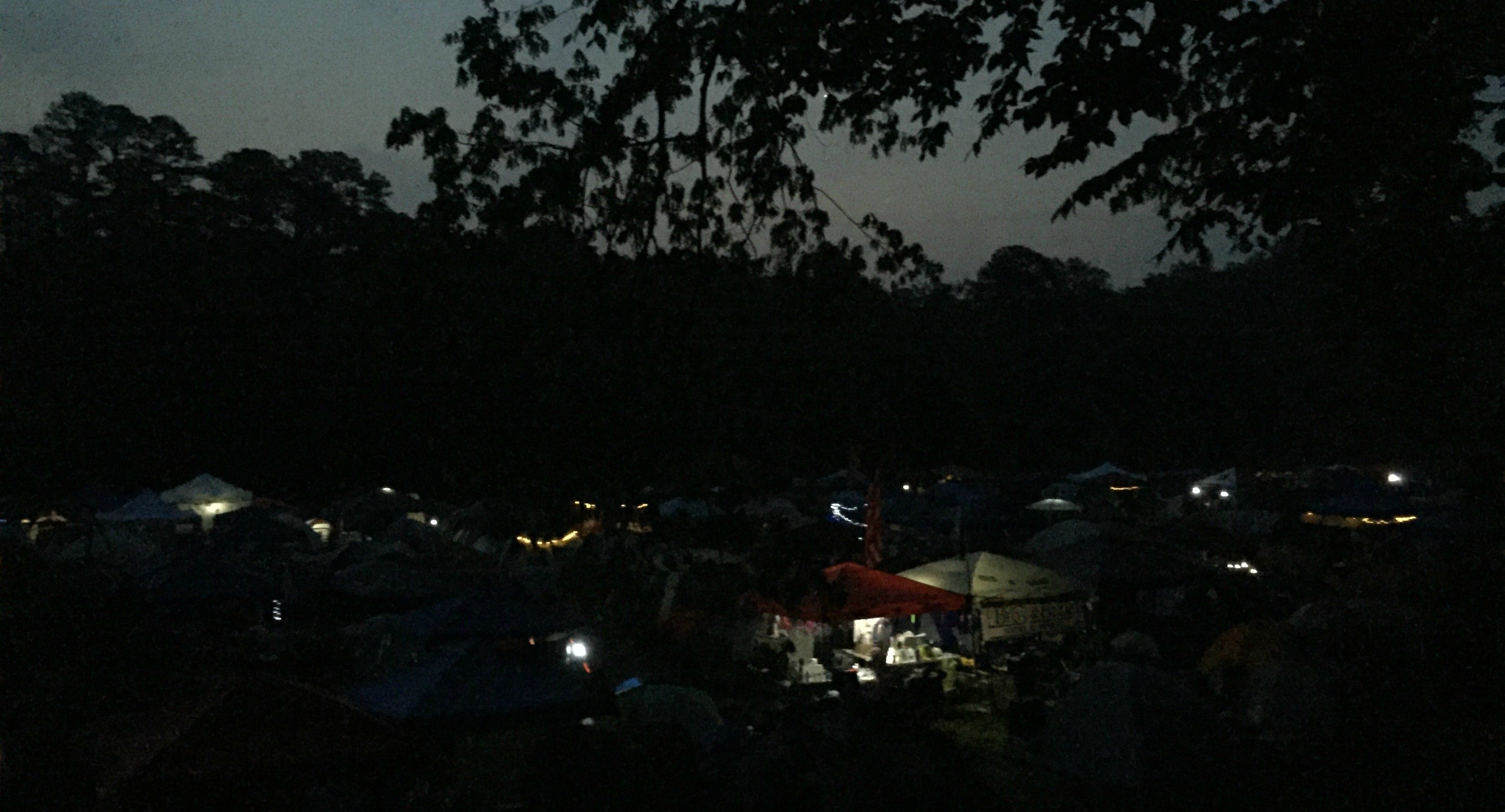 By the time I finished, it was apparent that our team was falling way behind and would quite possibly finish after the deadline. We started discussing it and came up with a plan, but it turns out that Ragnar handles the planning for you. They basically had the last 6 runners double up. So, I would with our runner #8 who also needed to run the Red Loop. We would be the ones leading the team into the finish.

I cleaned up and changed (again) and then headed to the Ragnar DC tent to volunteer for a couple of hours. I had a blast trying to convince the trail teams that they really wanted to run a road race (you get extra bling!) 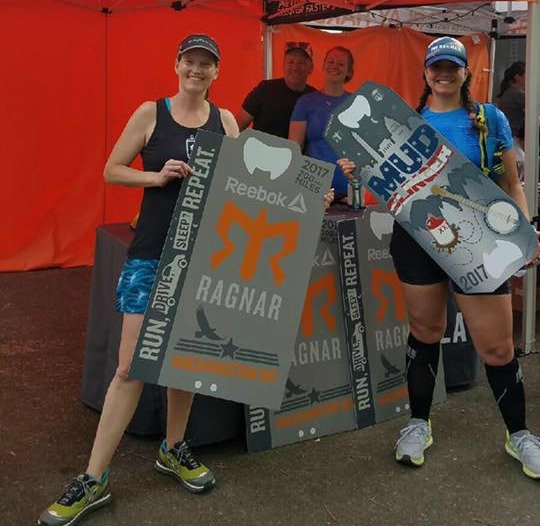 Then it was time to run again. Michelle and I headed out together. Per Ragnar, we had to run the whole loop together. Thankfully, Michelle was happy to go at my pace (she’s faster + has more experience on trails.) I ditched my tank as it was already ridiculously hot and humid. It felt like August in April. We made decent time at first, but 3 miles into our loop, I caught my foot on a root and did a full on belly flop into a pile of leaves. Luckily, it was a soft landing and the only issue I had was leaves stuck to every sweaty part of me (AKA I was covered in leaves.) We kept trucking along, but with one mile to go, I hit the wall. I was just done. Dehydrated. Underfueled. Exhausted. So we walked the last mile (which also happened to be uphill…) And then we were done and running it in with our team! 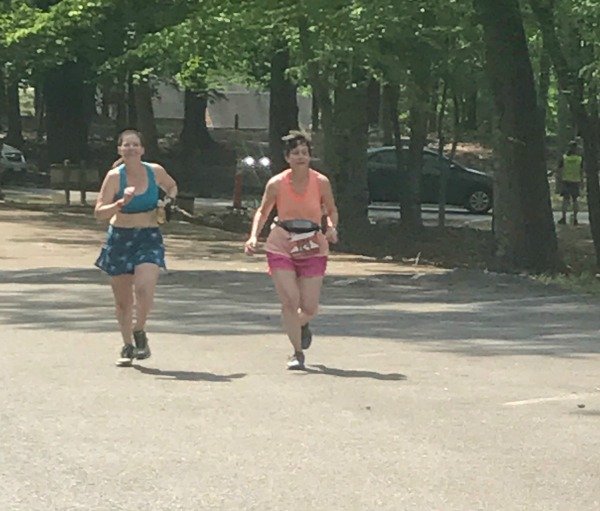 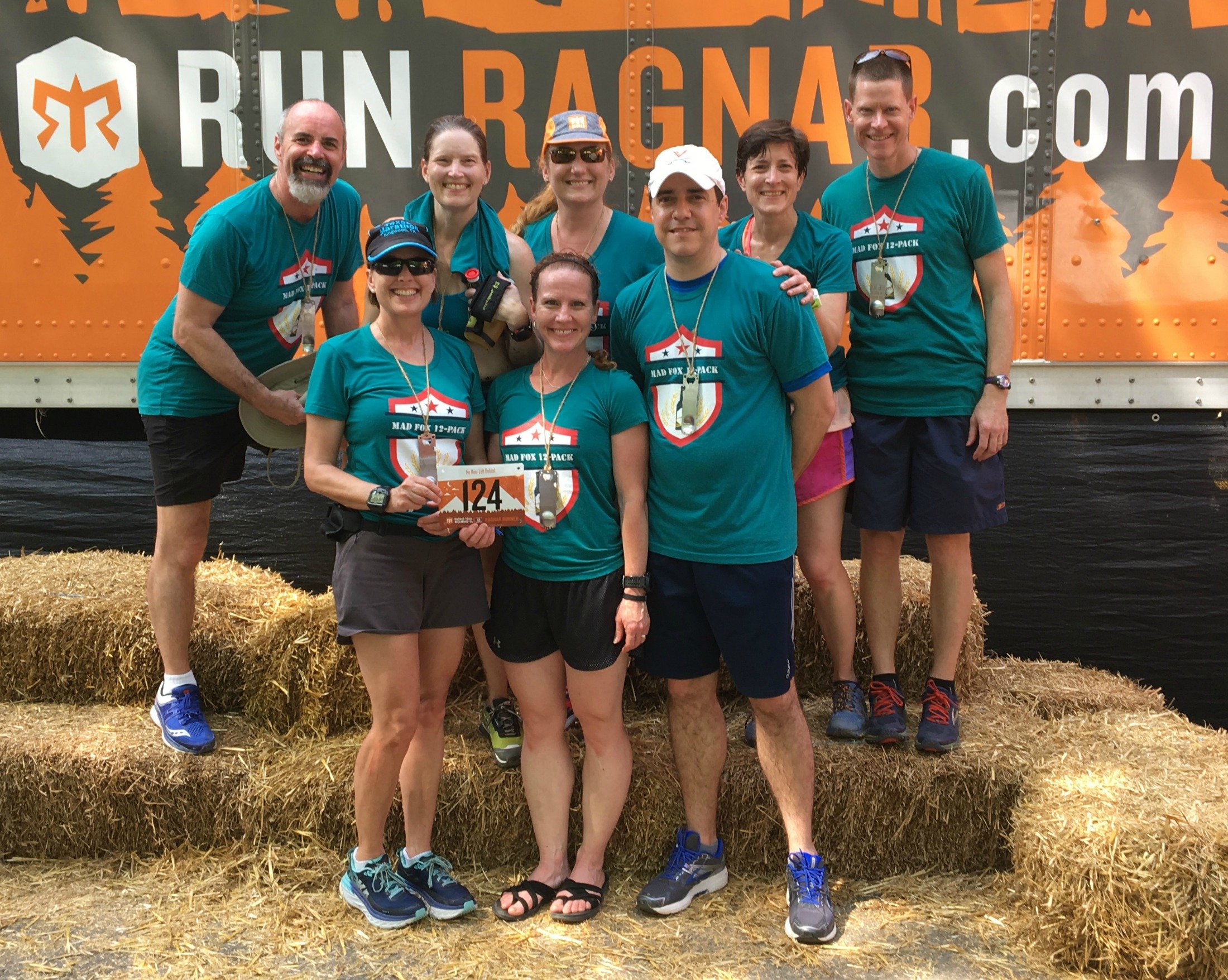 And lest you think that’s the end, then we had to pack up our camp and haul all of our stuff up to gear drop. I took a quick “shower” using leftover water from our 2.5 gallon water jugs and changed clothes (again). (I had 5 outfits with me. I wore them all. And they all went straight in the wash when I got home.) 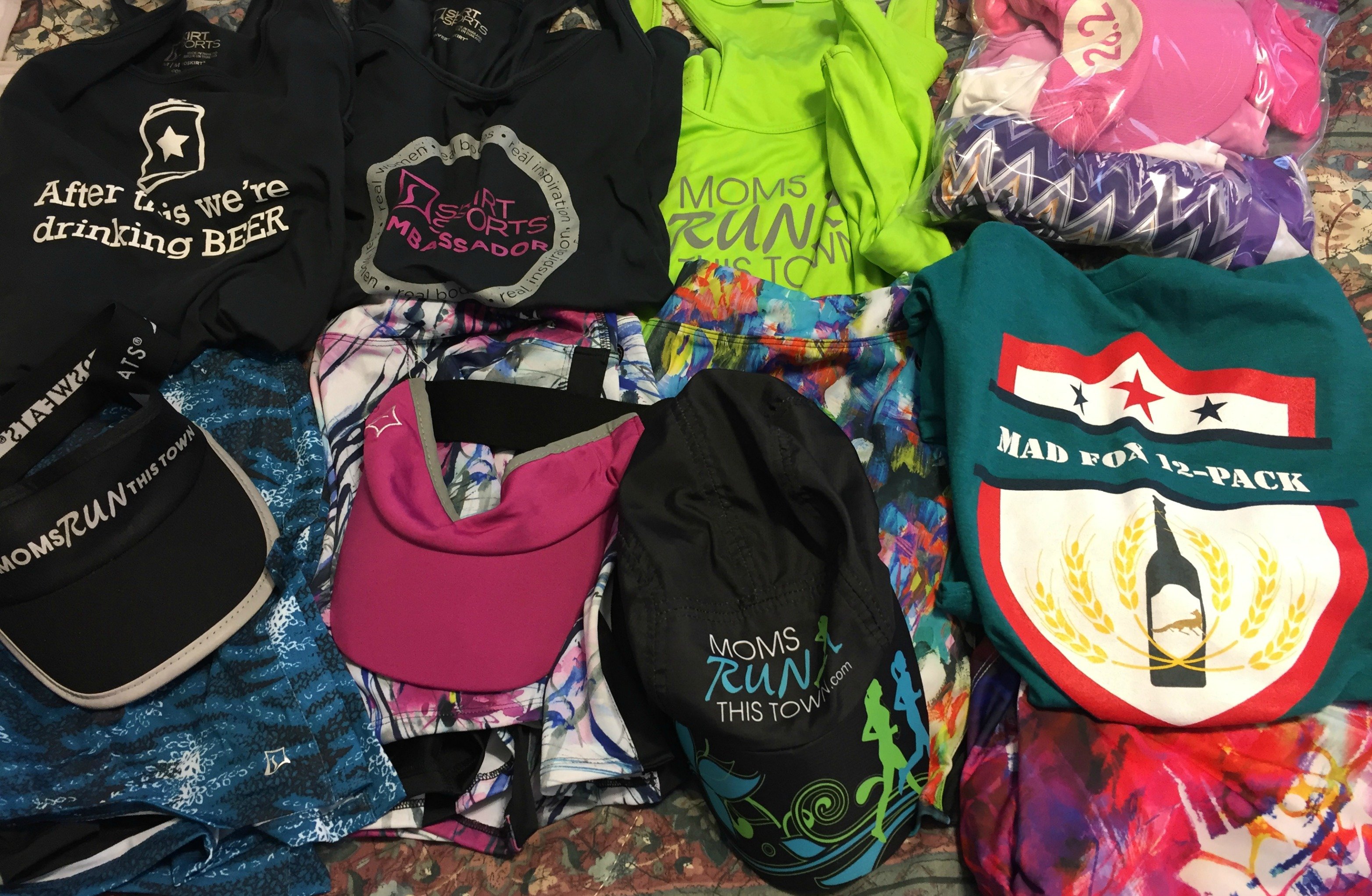 Then we dragged all the stuff up the hill and got the cars loaded.

I’ve run 3 road Ragnars. I’ve run two marathons in the same weekend. I have a child who didn’t sleep through the night for FOUR years. I’ve never been more tired than I was on Saturday night after Ragnar Trail Richmond. I said I’d never do a trail Ragnar again. But like childbirth and marathons, I’ve already forgotten and am thinking about when I can do one again… 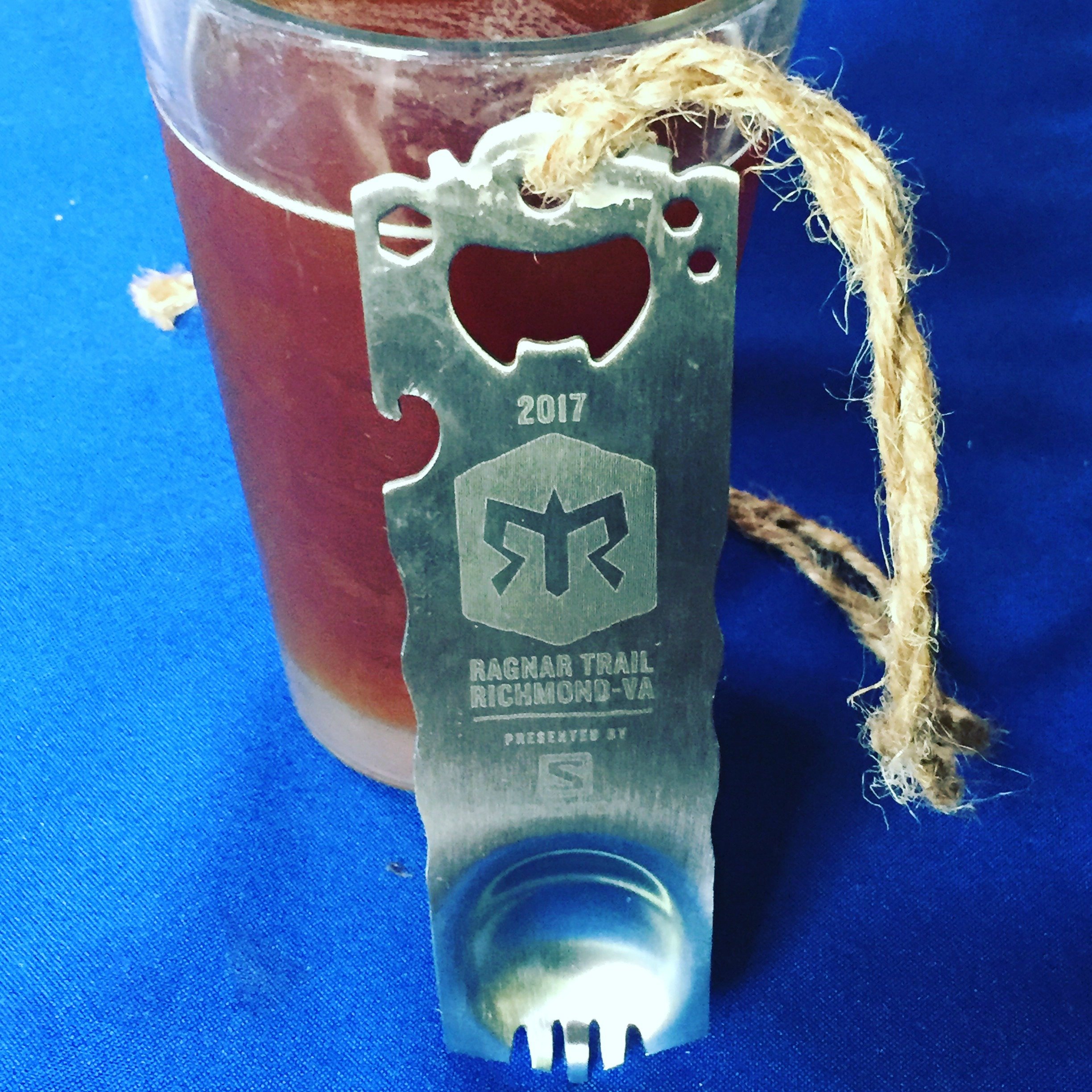