Is Rock n Roll Las Vegas marathon or half marathon on your bucket list? Want to run down the Las Vegas Strip at night?

Well, in an unusual move, RNR has given each of their Rock ‘n’ Bloggers a code to share that brings the price on the Rock n Roll Las Vegas marathon or the half marathon down to $145!  Both races start at 4:30pm on November 15, 2015! Use code MCMMamaRunsRNRLV! This promotion expires October 1, but RNR reserves the right to end it early, so jump on it NOW! 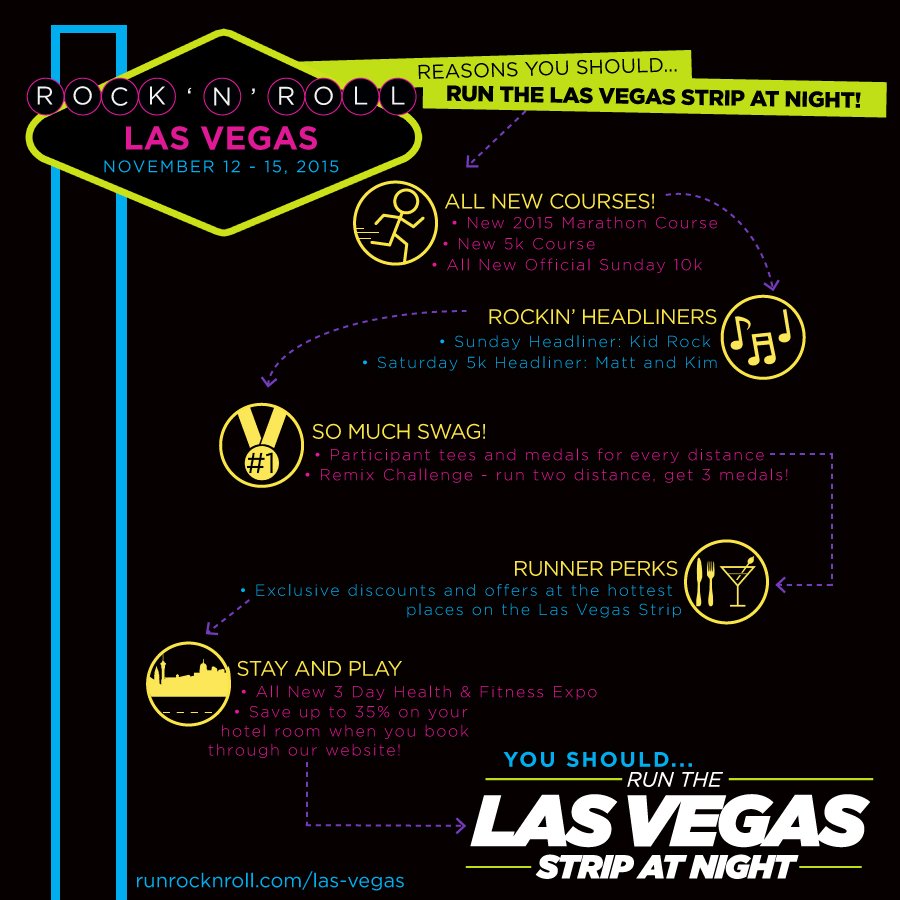 OK, signed up for Las Vegas? Then you are going to want to sign up for RNR Arizona.  Not only is it a cool race to run, because hey, Arizona in January! But you get a special medal for running Las Vegas and Arizona.

Ok, so those two races sound awesome to me, but there is no way either of them is happening for me anytime soon.  So, to make up the rest of my “Friday Five”, here are the 3 races that are still on the “maybe” board for me this fall.  If you are planning to run these (or any other 2015 races), use code MCMMamaRunsRNR for $15 off the half or the full.

3. RNR Brooklyn – This one is a long shot for me. Shoo has a soccer tournament and since I’m definitely the soccer mom, I’m not sure I can get up there for that.  Add in race commitments the next two weekends and I’d pretty much have to travel to any strange geographic location Beer Geek suggests (without complaining) for like the next 10 years. Oh, wait, I already do that (I may complain though.)

4. RNR Philadelphia – This one is a much likelier race than Brooklyn.  It’s closer, I have friends I could stay with, and it’s a Saturday morning so Shoo does not have a game then. However, it’s a week out from Marine Corps and I’m not sure how I’ll be feeling.  Add in that it’s both Halloween and Shoo’s birthday and I’m decidedly on the fence about this one. I would love to run it though.

5. RNR Savannah – Another wild card here that would depend both on how I feel after Marine Corps and on Shoo’s soccer schedule (they may have a tournament, sigh). But I love Savannah and the last time I was there, Shoo was a baby. I’d love to convince Beer Geek that he and I should take a road trip. It’s only a 10 hour drive after all.

What are your favorite Rock n Roll races? Have you ever had a race season get totally disrupted by other commitments? I have a funny feeling this is only the beginning of race and soccer conflicts.

I’m linking up with Courtney, Mar, and Cynthia for Friday Five. Today’s topic was “Fall Races,” which I already wrote about in August.
Disclosure: I’m a Rock ‘n’ Blogger and receive a free 3 tour pass (which I may not manage to fully use, sadly) as well as other assorted perks, but all opinions are my own.