You are here: Home / diet / Rungry and Hangry 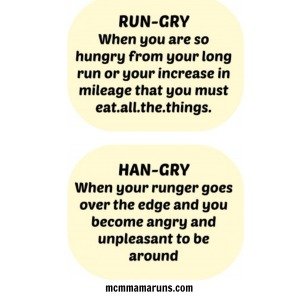 I admit, I’m not one of those runners who increases their mileage and can eat anything they want.  Instead, as soon as I begin to approach 40 miles a week, my body becomes super efficient at using every calorie that comes it’s way.  I gained weight when I trained for my first marathon.  Did it again when I trained for my second marathon.  And, yep, put on a few pounds last spring when I trained for five half marathons in five days.  I’ve tried eating more (just put weight on faster), eating less (umm, hangry comes to mind), reducing carbs (hello, exhaustion), increasing carbs…  Suffice it to say, I’ve messed around with my eating to try to fuel my runs without outgrowing my jeans.  (Because, honestly, it’s not the number on the scale that concerns me, it’s the muffin top…)  I’m assuming I’m not the only one, so here are some tips for long distance training without dying from runger, becoming hangry, or outgrowing your jeans.

1.  Eat immediately.  It doesn’t have to be much, but eat something.  The general recommendation is 4:1 carbohydrate to protein and that’s great if you can manage it, but for me, just getting food into my system is the important thing.  My “go to’s” when rushed are a glass of chocolate milk or a piece of fruit with almonds (although I have to admit the slice of pizza after the Richmond Half was pretty much the best.thing.ever.)

2. Drink more. And I don’t mean beer.  Make sure you are hydrating before, during, and after your runs.  Not only will it be harder to snack when you are drinking a lot, but it will also keep you from feeling hungry when you are really just thirsty.  My go to’s are fizzy water (I have a Sodastream addiction), watered down nuun, and iced green tea, preferably non-caffienated.

3.  Eat more protein and healthy fats.  I’ve tried Paleo and I’ve tried lower carb styles of eating.  My running is awful when I don’t get enough carbs.  (There are some who would say I just haven’t stuck with it long enough, maybe, but I’m certainly not doing that now.)  But I have found that eating a higher percentage of protein and some good healthy fats really does help keep the runger under control and decreases the likelihood I’m going to head into hangry.  I’m a huge fan of avocados and nuts.  I also try to keep some cooked protein in the fridge or freezer for those moments when I absolutely must.eat.now.  I carry Simply Snackin’ meat with me in my bag pretty much all the time now.  I found last year during the Dust Bowl Series that they were super helpful about 2-3 hours after my post run meal.

4.  Move more. I know that seems counterintuitive.  I mean, won’t that make you hungrier?  Not for me.  Adding some cross training helps me combat the lazy runner syndrome as well as keeps my upper body from losing what little muscle I have.  I particularly like things like planks, pushups, lunges, etc. as something to occupy me when my brain is hungry but my body doesn’t really need more food.

5. Get enough sleep. I SUCK at getting enough sleep.  I’m a night owl, but I have to get up early during the week so that the kids get to school on time.  It’s a constant battle to get more than 6 hours a night.  But, guess what?  When I do?  My body does so much better.  (I know, not exactly rocket science.)

And remember, just because you ran more than 30 miles last week, doesn’t mean you can drink 3 beers, eat several sliders, and have a huge slice of chocolate cake at a birthday party.  Oh wait,  that was me.  Oops.

Got tips for fueling when you are training for a big event?  I’d love to hear them as it would be awesome if my jeans still fit in June…