Welcome to everyone stopping by for the March into Spring Giveaway Hop! I hope you’ll stick around and become a part of the fun here, but if you are in a hurry, hop on down to the bottom of the post for entry instructions to win an Amazon gift card and links to 20+ other awesome giveaways! 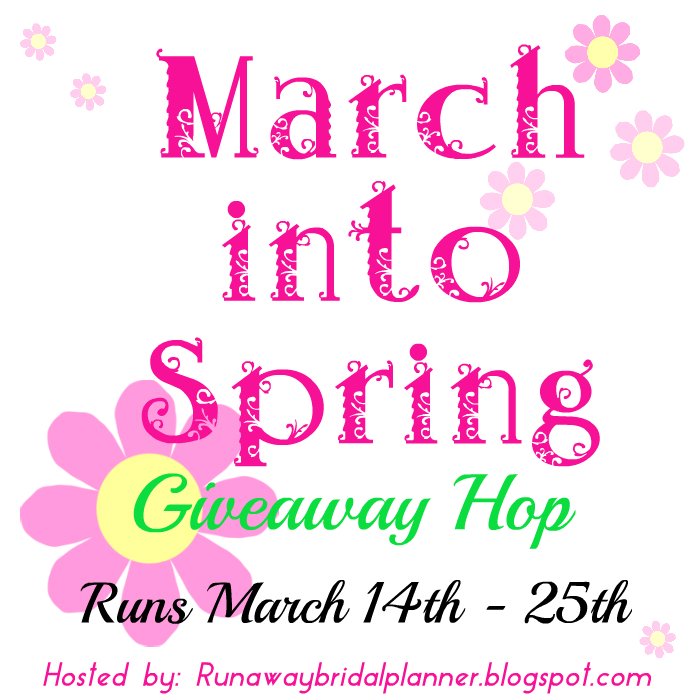 This past weekend kicked off my spring racing season, but that was far from the only thing going on! I feel like I was away from home from Thursday morning until Sunday afternoon, despite not actually traveling anywhere. And I hadn’t planned quite such a drastic taper (since I’d hardly trained), but apparently that worked for me.

But, I’m getting ahead of myself LOL.

Thursday Shoo and I went on a field trip to Pamplin Historical Park. Despite only being a couple of hours away, I  had never been there and was excited to check it out. I was less excited that we had to be at Shoo’s school at 6:30am! Anyways, it focuses on Civil War history and I really enjoyed the visit. I’d actually like to go back again as I feel like there was so much else to see. 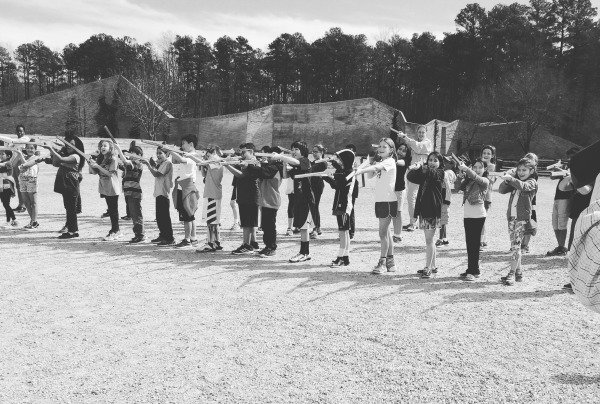 Returning from the field trip, we had to rush to Shoo’s soccer practice, which meant no time for dinner. I’d packed him a second PB&J (yes, he had one for lunch and one for dinner), but I couldn’t stomach a second one. I decided I deserved a reward for being on the go from 6:30am-7:15pm and bought myself a super yummy salad from Sweetgreen. I swear, if they weren’t so expensive, I’d buy one every time Shoo has practice. 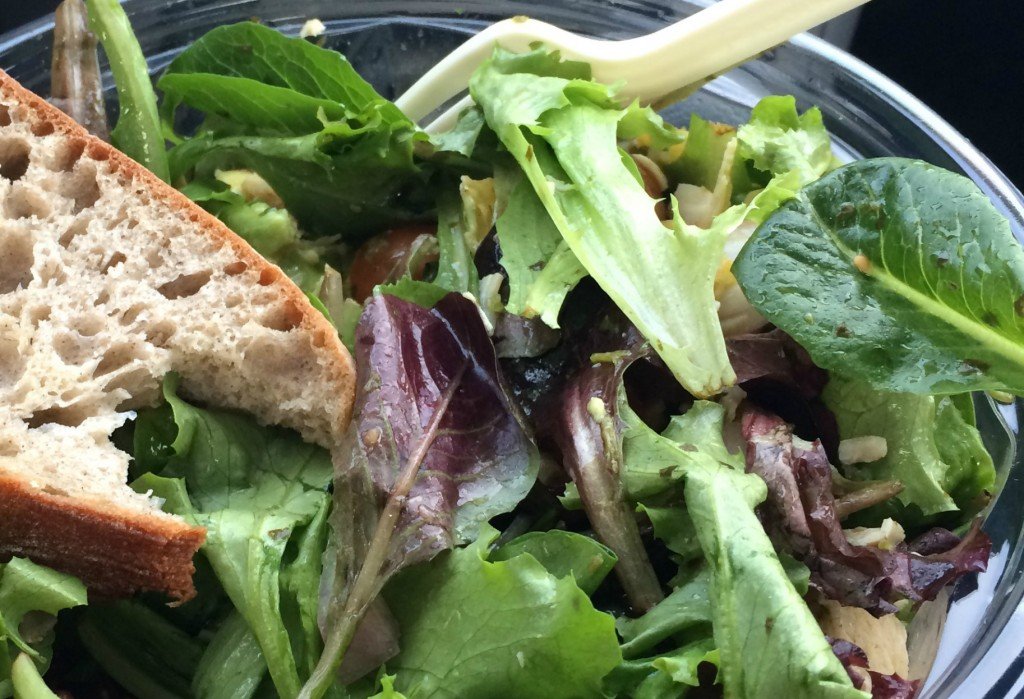 Friday was a teensy bit calmer – I just had to go to the race expo and then a tour of the Capitol. NBD. OK, kind of really a big deal. The expo trip was uneventful, other than running into a ton of friends all over including my blogging friend, Andrea (who I totally snagged this picture from.) 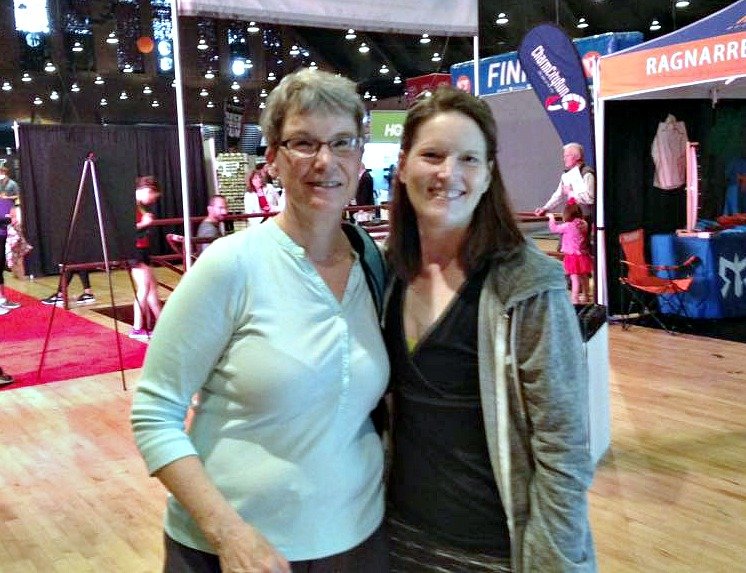 Then it was time to grab Beer Geek and hit the metro over to our tour. See, a few days ago, I found out that I’d won the lottery for a Capitol tour from Rock N Roll and Congressman Ryun. 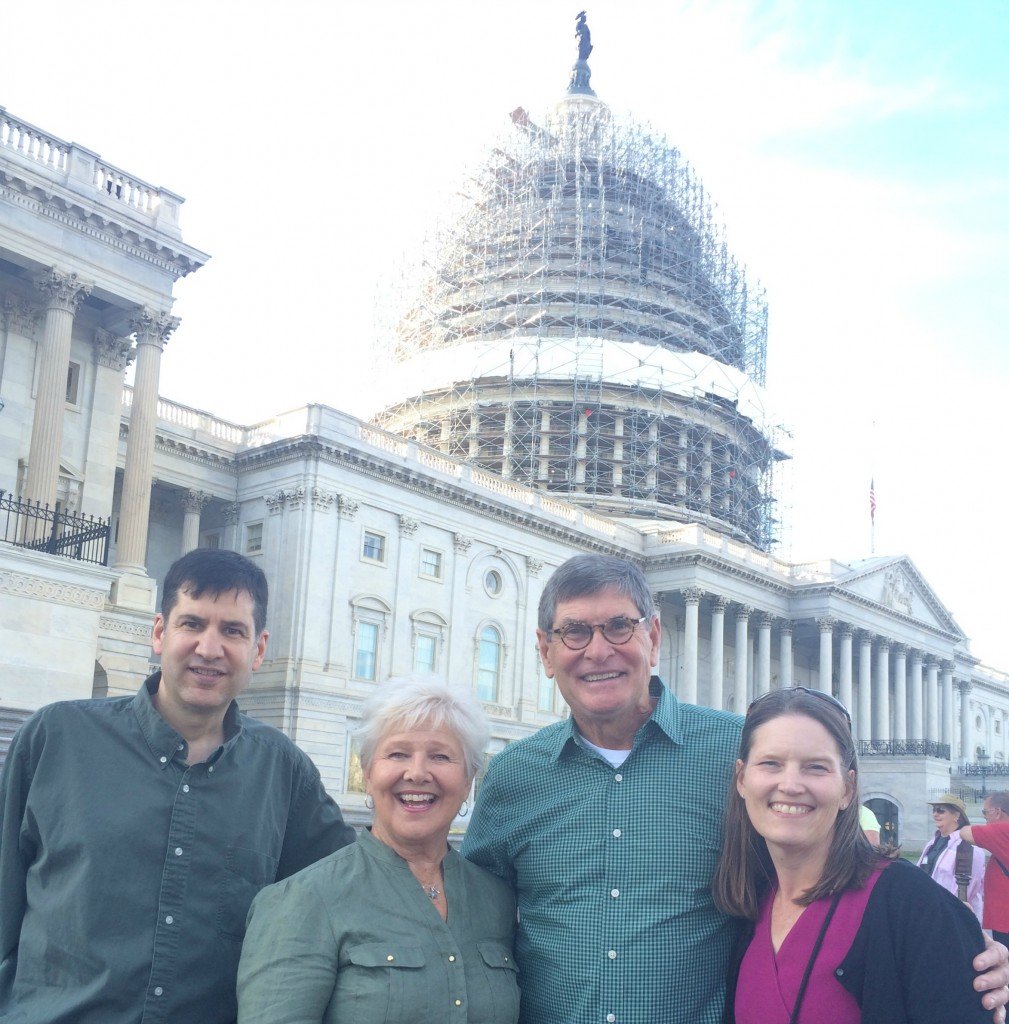 (If you don’t know Ryun, he was a crazy fast runner – hit a 4 minute mile in high school and represented the US in 3 different Olympics. I’m sure he also accomplished things while in the House of Representatives, but I don’t talk politics here, so you’ll have to look that up yourself.) Anyways, he and his wife treated a small group of us to the kind of tour you can only go on with a Congressman. We were on the floor of the Chamber of the House of Representatives, got to go on the Speaker’s balcony overlooking the Mall, and spent a few minutes in the Capitol Chapel. Definitely one of the cooler things I’ve ever done in DC! 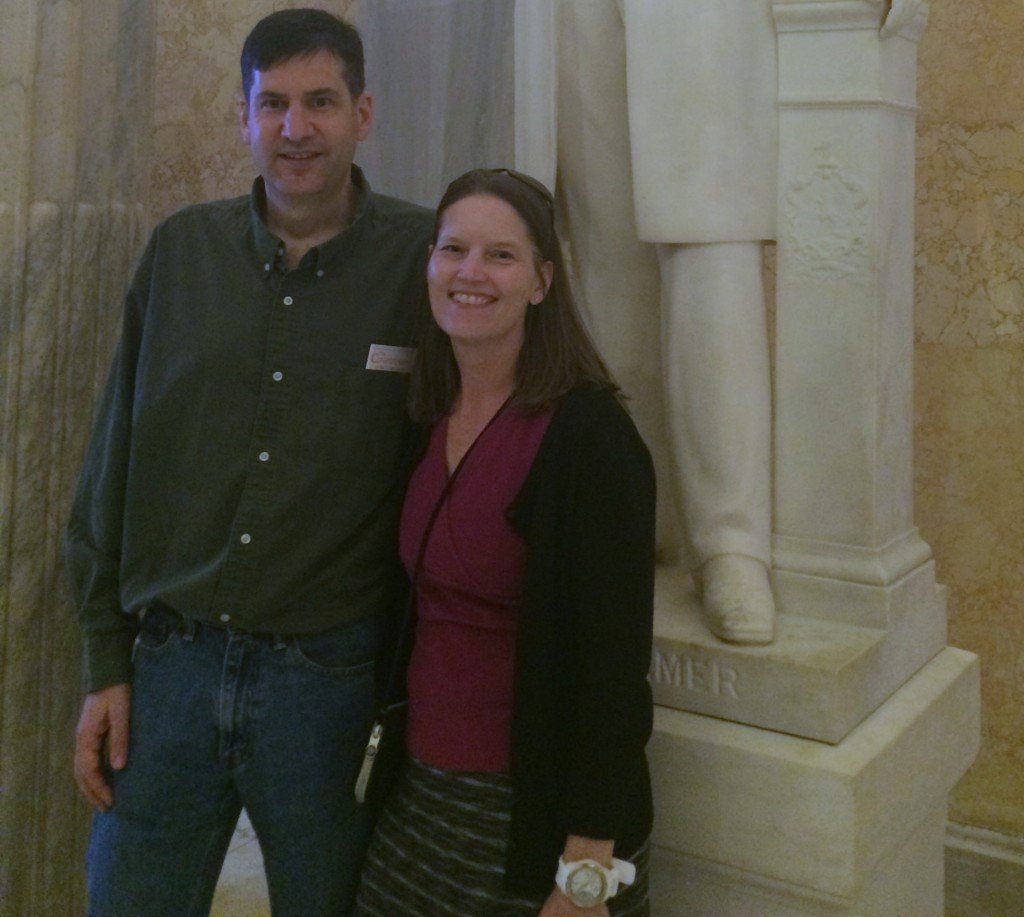 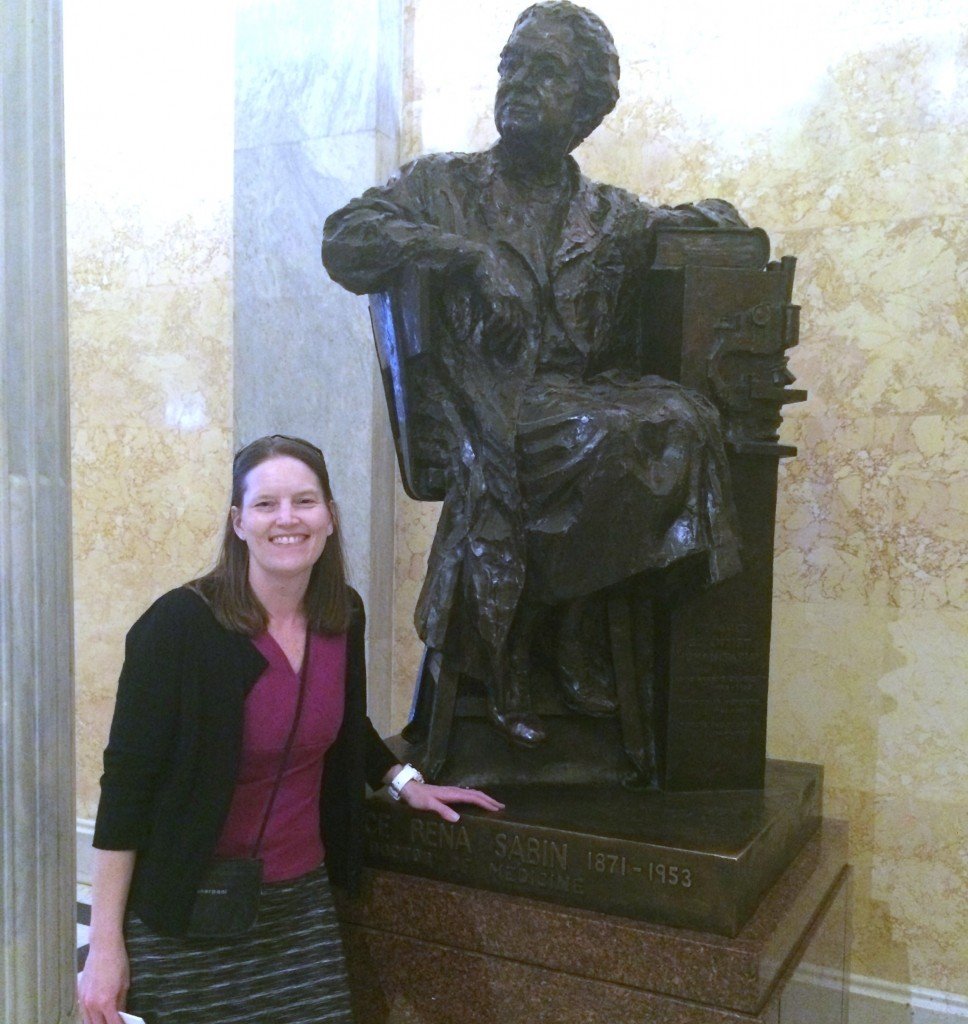 By this point, I’d spent much of Friday on my feet and was ready to wind down. Unfortunately, my friend’s flight got delayed and it was after midnight when I picked her up. My 1am bedtime did make the 4am alarm any easier! But we got up and got ready and headed to RFK to park before the race.

Thank goodness for GPS because in my sleep deprived state, I took a wrong exit and we got to take the scenic tour of DC on the way to the parking lot. Luckily, once we were parked, the walk and metro ride were a breeze and we had plenty of time at the start line to chill. (Or actually get a bit chilly – I ended up keeping my denim throwaway shirt on for the entire first mile.) 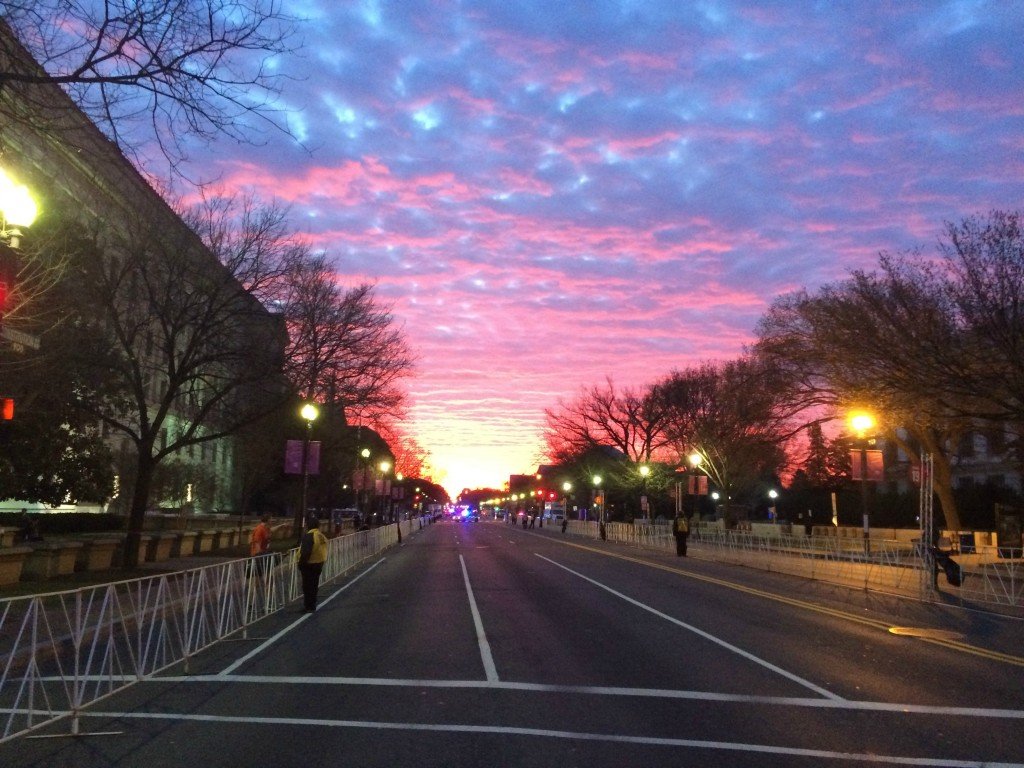 I’m going to recap the race later, but I will tell you that it was my fastest half in over a year and I felt great the entire time. Apparently muscle memory from 46 previous half marathons (and 5 marathons) will get you through what your training lacked. And I even ran up the entire Calvert hill. I’ve NEVER done that before.

After the race, I had a lovely lunch at the VIP tent while I waited for my friend. I’ve often debated buying VIP and always decided no, but I really enjoyed it this year. Even without going to the pre-race part, it was worth it. The parking was SOOO close to the finish, the food was great, and the portapotties were barely used. 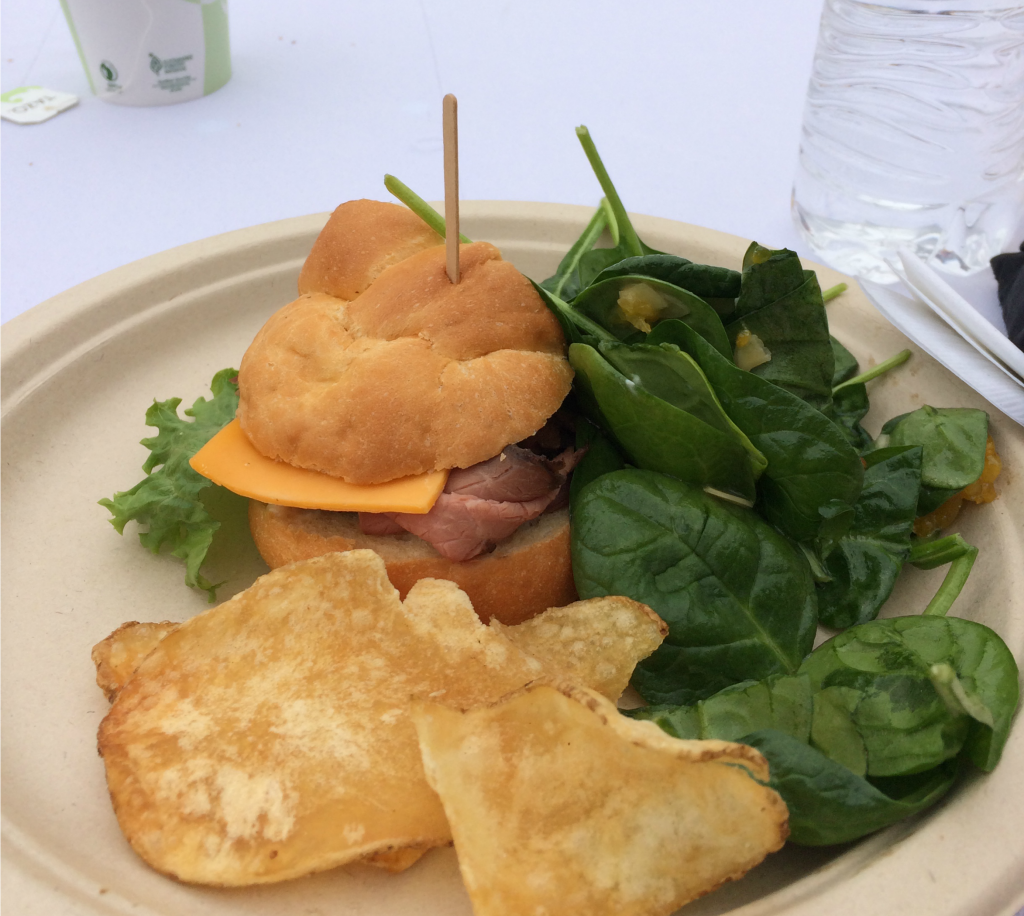 As soon as I got home, it was time to head south for a soccer tournament. Our team won the first game and lost the second, but ended in the semifinals, which meant another morning game. By the time we got home at 9pm, I’d been on the go for almost 17 hours. I was wiped! 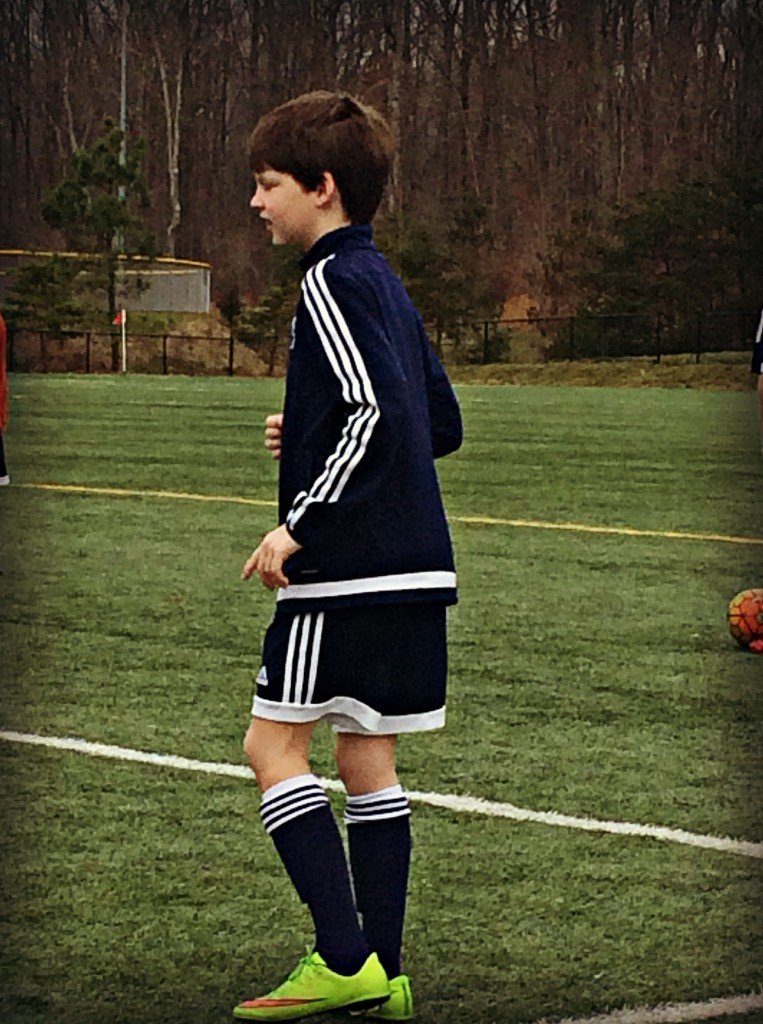 Sunday we had to get up early and we’d lost that hour, so I was still a tired puppy. Shoo and I dragged ourselves to the game, where he sat on the sidelines for most of the game, due to ankle pain. (He’s obviously smarter than most runners because he asked to be a sub rather than a starter because his ankle was hurting. Good to know that one of us listens to our body…) Unfortunately, his team lost so that was the end of the tournament for us. (Umm, ok, maybe I was not unhappy to get home instead of having to spend more hours down there…)

The rest of the weekend just involved me trying to catch on laundry and straighten the house back up. Funny how 4 days of “go go go” can put you behind.

Now I have a busy week ahead of me, including a visit to an event at the White House! Why yes, March has been a good month so far. Thanks for asking.

Don’t forget to join us for Tuesdays on the Run! The topic this week is “The hardest part of running is…”  We talked about the best things last week, now tell us about the hardest/worst parts.

And now for the giveaway! I had planned to reach out to one of the awesome companies I’ve worked with in the past and get you all something good, but life has been busy and I completely forgot. Oops.

Giveaway runs between March 14th and through midnight on March 25th.  You must be 18 or older to enter, and have a valid email address.  Winner will be notified via the email provided.  Winner has 48 hours to respond, if no response winner forfeits winnings and another winner may be chosen. Void where prohibited by law.

I’m also linking up with HoHo and Tricia for Weekly Wrap.