You are here: Home / Race Report / State #8 – a different sort of race

Normally, when I run a race as part of my quest for 50 states, I really RACE it. That doesn’t mean it necessarily works out to a PR or that I even run it well, it just means I push myself as hard as I can.

Today’s race was not that sort of race. Back in June when Dad and I started looking for a state to pick up this weekend, we chose a 5K in Illinois. Why a 5k (since I’ve said before that I wanted my races to be longer)? Well, my mom and JONES wanted to do it too. 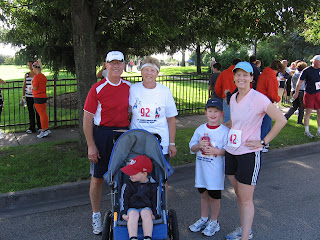 This morning was clear, but cool and windy. We were all chilly as we waited for the start of the race. It was a small race with less than 150 participants, so we all just hung out near the start until the gun and then we were off.

Dad took off with Shoo in the running stroller and Jones took off like he was shot out of a cannon. As I’d expected, Jones moved at either a dead sprint or a slow walk. There was no in between. Unfortunately, we had not trained as planned this summer, so he burnt himself out in mile one and had to walk the rest of the way. He’s perfectly capable of walking that far, but well, there’s a reason his nickname is Lazy Bones Jones. Despite a lot of whining, he finished! My mom has some pain going on in her hip, so she walked with Jones and me instead of walking at her usual pace (or even running). 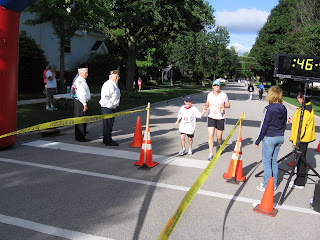 The end result: Jones finished in just over 46 minutes and was the youngest finisher. Mom won her age group. Dad was second in his age group (and the first stroller finisher). Me, ahem, well, I wasn’t last in my age group LOL (and it was interesting to discover I could walk 15 minute miles and not break a sweat or get my heart rate up.)

I’m so proud of Jones for finishing and now he really wants to practice and run some shorter races. He’s also now suitably impressed by how far his mommy runs. ;o)