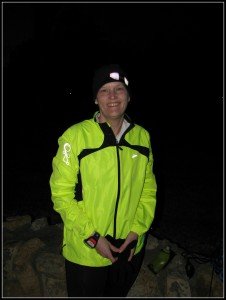 Short story: I finished. It wasn't my slowest day. Long story: For the fourth race of the Dust Bowl Series, we ran in Lamar, CO.  Thanks to our decision to switch to a B&B, we had a yummy breakfast before the race instead of having to make a PB&J in the room.  It was also closer to the race start, so we didn't head over until 6am.  (As an aside, three of the races were in central time and the last two were in mountain time.  I just stayed on central time, which means we went to sleep at 8:30pm mountain. I'm so time confused right now, it's not even funny.) It was chilly again, but not as bad as the previous day.  I opted for fewer layers on the bottom, but still wore my arm warmers and two pairs of gloves.  Thanks to … END_OF_DOCUMENT_TOKEN_TO_BE_REPLACED 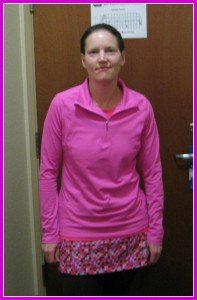 Short story: I finished. Long story: Tuesday was the second day of the Dust Bowl Series.  We ran on a concrete path around a small lake in Guymon, OK.  The path was exactly one mile in length, so the half marathoners had to run 13 laps, with a small out and back at the end.  Thankfully, they set us up with chip timing, so we had help keeping track.  When I originally signed up for the Series, I was dreading the one mile loops.  As it turned out, there was a lot of awesome to it. Beer Geek had food poisoning, so he took my picture before I left and then I caught a ride to the start with another runner.  (I LOVE this part of the running community!) One of the first purchases I made when we got to the Dust Bowl area was a … END_OF_DOCUMENT_TOKEN_TO_BE_REPLACED 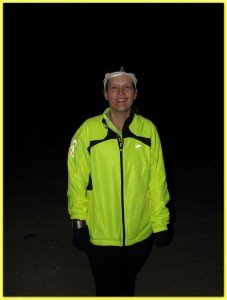 Short story: I finished. Long story: Monday was the first day of the Dust Bowl Series and we ran around Lake Rita in Dalhart, Texas.  It was a 6.55 mile loop that the half marathoners ran twice.  It was a "crushed gravel" surface, but really felt more like running on sort of packed dirt.  As a pavement runner, I found it took a lot of my energy, but it did make things easier on my foot. We started "dark and early", but thankfully it was mostly light by the time we actually hit the path.  It was quite chilly and I couldn't feel my feet until about the end of the first mile. The scenery was lovely in some parts and very desolate feeling in others. Sadly, I spent most of the 13 miles by myself as we were all spread out. The … END_OF_DOCUMENT_TOKEN_TO_BE_REPLACED 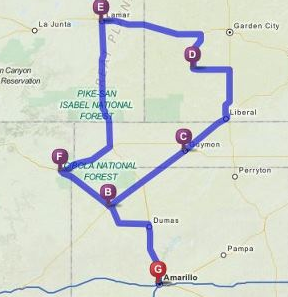 Yesterday, Kim from Just Trying is for Little Girls shared this picture on Facebook... 5 (half) marathons. 5 days. 5 different states. And I need all 5 states. My first thought was "You crazy."  My next thought was "Hmm..."  I threw out the idea to Beer Geek, who is usually my reality check.  Instead of bringing my "great" idea to a quick halt, his response was "As long as I get to go too." ('cause these would be all new counties for him.  Yes, he tracks what counties he's visited.  ) Oh.my. There are a ton of logistics to work out (boys would need to miss a week of school) and I need to start running more than 10 miles a WEEK LOL, but yeah, it sounds like a heck of a lot of pain fun. So, who's in? … END_OF_DOCUMENT_TOKEN_TO_BE_REPLACED