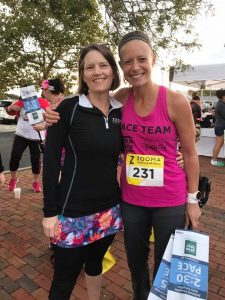 This past weekend was incredible! It always amazes me that working so hard can be so fun! I got into Providence on Thursday afternoon and met the rest of the ZOOMA crew for the drive to Falmouth. We headed to the Sea Crest where we met to course director for a drive around the course. I was in the way back of the van, so no pictures were taken, but the course was absolutely gorgeous. Then we headed back to the Sea Crest for dinner and a relatively early bedtime. Friday I popped out of bed before my alarm and headed for a short run along the coast. I was lucky because I managed to get out and back before the rains came. Next up was hours of prepping for and then attending the ZOOMA expo. I got to meet a lot of the … END_OF_DOCUMENT_TOKEN_TO_BE_REPLACED 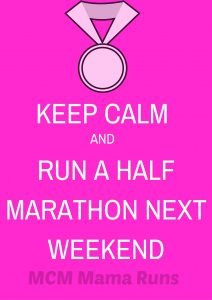 Did you say race? Where do I sign up? Yes, today on Tuesdays on the Run, we are talking about how often you race. Umm, admitting how often I race is kind of like admitting how many skirts I have from Skirt Sports. I'm not sure anyone really needs to know the exact number... I ran my first race in 2007 - an 8K. It seemed like a long ways. I ran 4 other races that year, including  my first 10 miler. 5 races in a year seems reasonable, right? I ran 4 races in 2008 with my first half marathon and first marathon both occurring that year. That seemed like a lot of miles. I ran 14 races in 2009 including 3 half marathons and 2 10 milers. Is this where the addiction began??? I ran 11 races in 2010 including 2 half marathons, a 10 … END_OF_DOCUMENT_TOKEN_TO_BE_REPLACED 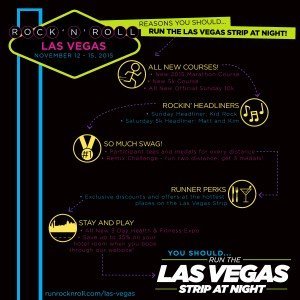 Is Rock n Roll Las Vegas marathon or half marathon on your bucket list? Want to run down the Las Vegas Strip at night?   Well, in an unusual move, RNR has given each of their Rock 'n' Bloggers a code to share that brings the price on the Rock n Roll Las Vegas marathon or the half marathon down to $145!  Both races start at 4:30pm on November 15, 2015! Use code MCMMamaRunsRNRLV! This promotion expires October 1, but RNR reserves the right to end it early, so jump on it NOW! OK, signed up for Las Vegas? Then you are going to want to sign up for RNR Arizona.  Not only is it a cool race to run, because hey, Arizona in January! But you get a special medal for running Las Vegas and Arizona. Ok, so those two races sound … END_OF_DOCUMENT_TOKEN_TO_BE_REPLACED 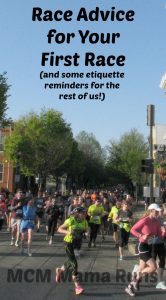 April, Patty, and I put out a call for topics a few weeks ago and one that got tossed around as a favorite was "Race Etiquette" (or pet peeves.)  I totally planned to write a snarky post about my pet peeves, but I'm still basking in my post Mainly Marathons race glow.  I swear, running with this group of runners always makes me feel like running and runners are the best.thing.ever.  Seriously, I feel like I should go for a run and sing Kumbaya or something LOL. So, here are some things every runner should do or not do as they run a race. Do thank your volunteers. Don't run (or walk) 3 or more abreast. Do throw your trash in the trash can (or at least to the side of the course near the can). Do aim your spit or snot rocket … END_OF_DOCUMENT_TOKEN_TO_BE_REPLACED

Life has been a little crazy lately, so I decided to take my buddy Courtney up on her offer to fill in for me.  I got to meet Courtney in person this year when we ran ZOOMA and the Fit Foodie 5k.  I LOVED hanging out with her and am already scheming to find another race we can drink at, I mean run, together.  So, here she is, Courtney from Eat Pray Run DC. Please make her feel at home! ~~~~~~~~~~~~~~~~~~~~~ Hi y'all! I'm so happy to guest post for Erika since she posted for me while I was off getting married. She's one of my favorite bloggers and I've been lucky enough to spend some time with her recently in real life and she's just as awesome as she appears on her blog. Anyway, I thought I'd share my tips on how to PR a race in 3 easy … END_OF_DOCUMENT_TOKEN_TO_BE_REPLACED

Sarah at Running (to keep up) with a Toddler asked me "What is your favorite distance to run?" My favorite distance?  10K I know I'm unusual in that.  Most people don't like it because it's too long to go flat out like a 5k, but too short to consider a true endurance race and take it at an easier pace.  But, I love that distance most of the time. Why? It's a distance that I can nearly always manage.  Even two weeks after having to take some time off for an injury, I was able to finish one. Most of the time, it's a distance I can run strongly for the first five miles and then crush the last mile.  It takes me a couple of miles to truly warm up these days, so I can go out easy and just keep getting faster.  10K is the distance … END_OF_DOCUMENT_TOKEN_TO_BE_REPLACED

Seriously, I feel like I have absolutely nothing to say.  Which is somewhat amusing given just how much I have going on in my life right now.  My brain should be overflowing with things to say, but I've got a case of killer writer's block.  And Shoo hasn't even said anything too funny lately... I'm gonna blame it on the heat (why not?  I blame everything else on the heat. LOL) So, here's a random brain dump for you.  ;o) I had a fabulous 3 mile run on my treadmill yesterday in a new pair of "shoes" I'm trying.  They are from Zemgear and they rock.  (Review soon!) I also had serious skirt success.  I think I may have found a skirt that doesn't require a gallon of glide to prevent chub rub!  Woot!  (Review after I run longer than … END_OF_DOCUMENT_TOKEN_TO_BE_REPLACED