I really wanted to call this post "It's Friday I'm in Love", but I figured that would reveal just a little too clearly how old I am LOL. I'm super excited to tell you about the Athleta Relay capri and the Athleta Luscious Half Zip. I'm a huge fan of Athleta.  I love their clothes and I love that they support Girls on the Run.  I've found that while their prices are high, the quality is worth it.  I bought swimsuits from Athleta for cub scout camp this summer and love that they are both modest and comfortable in addition to performing well.  I live in their Whatever skirt in the summer and I recently wore their Strata skirt on New Year's Eve, which was like wearing my pajamas and looking good at the same time.  In fact, I think of Athleta … END_OF_DOCUMENT_TOKEN_TO_BE_REPLACED 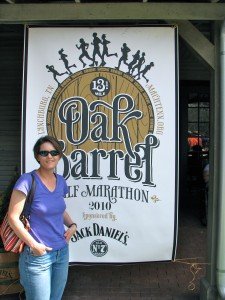 File this under: apparently I have no body parts I won't talk about. Backstory: I have two kids. I nursed said kids longer than, umm, average. In the process, I went from a size B to a robust D (at least on one side, ahem) and back down to a small C. Twice. All the moms out there are nodding their heads. You know what that means. Thankfully, that problem was easily solved by my friend Vicky and her secrets.   Enter my current dilemma - running bras. Generally speaking, I go for the "fight your way in, look completely flat" style of bra... Most of the time I'm ok with that look, but since I've recently discovered that putting a running bra on at the start of the day GREATLY increases my chance of running that … END_OF_DOCUMENT_TOKEN_TO_BE_REPLACED 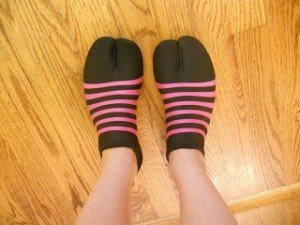 I recently got a chance to try out the Zemgear Ninja shoes.  I've worn them quite a bit, but haven't exercised in them much since they are only for use indoors and on soft surfaces.  I don't exercise indoors much during the summer and one would never call the streets by my house a "soft surface". Aren't they cute?  My kids think they are hilarious.  I've run on the treadmill once with them and they were great. Very comfy and nice traction.  I've also used them when I was lifting weights at my parents' house.  I wasn't fond of them on the elliptical, but that was because I always end up with my toes against the front of the step when I use it.  In normal shoes, this isn't a problem, but in these I felt … END_OF_DOCUMENT_TOKEN_TO_BE_REPLACED

Yeah, I couldn't get my act together to do this for post 700. Story of my life lately.I'm gonna borrow a page from TMB and giveaway some of my favorites...nuun (you choose the flavor)GU (you choose)glass from Mad Fox BrewpubBalega or Wright socksMCM Mama Stickerand, depending on the winner, possibly something yummy to go in that glass.How to enter (please leave a comment for each):1. Become a follower2. Follow MCM Mama on Facebook3. Tweet this, post it on facebook, put it on your blog, write it on your t-shirt for a race (picture, please LOL)Fine print: Giveaway ends at midnight on March 7, 2011. All items were purchased by me. … END_OF_DOCUMENT_TOKEN_TO_BE_REPLACED