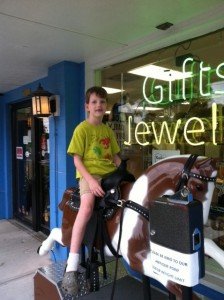 No, that's not the last book in the Misty series.  It's what we did for the last four days.  And it's the real reason I didn't run the Army 10 miler. Our county schools always have two days off in October for elementary school conferences.  Normally this coincides with Columbus Day, but this year it was later.  I didn't even realize it until well past the Army transfer date.  (And, for the record, I was not the only parent in our county who was caught completely off guard by the change.) Anyways, we rented a small cabin (at Dove Winds, if you are curious), packed my Pilot full of kids, clothes, and food, and headed to Chincoteague Island. And it's been pretty much nothing short of amazing.  Seriously.  The weather was nearly … END_OF_DOCUMENT_TOKEN_TO_BE_REPLACED 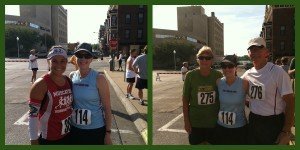 One of these days I'll check the race description/elevation chart BEFORE I sign up. I'm beginning to feel like I'm not on just a 50 states quest, but rather a quest to find all the hills along the way. The Good: Muscatine, Iowa is a really cool small town.  The boys got to play at an awesome little park the night before the race. In its 35th year, the Watermelon Stampede was really well organized.  First rule of the race?  Double tie your shoe laces.  Second Rule? No one under 14 in the first three rows.  Loved it! The weather was perfect. I finished in 58:13, my fastest 10k in a while. Randomly running into a fellow member of Team Tough Chik. On the drive home, we got to stop at a brewpub and brewery museum for … END_OF_DOCUMENT_TOKEN_TO_BE_REPLACED

You may remember my crazy post from a few days ago about the five half marathons in five days?  You know, this... I realize it's 7 months away, but there's been a lot of discussion about it in our house. I mean, the cost and logistics of getting four people from DC to Amarillo, TX, is a bit daunting.  That's without even thinking about the missed school, the missed work, and what the heck the boys will do while I'm running.  There's even been some discussion of having my non-runner husband volunteer at the races so that I can get a free race or two. But the piece of planning that has been foremost in my mind is "how do I train my body to cover that kind of mileage over 5 days?"  (And maybe a little bit of thinking about what level … END_OF_DOCUMENT_TOKEN_TO_BE_REPLACED

I have a lot to say about the two weeks we spent in Oregon and Washington.  We did a lot of really cool things and visited some awesome places.  I'll get to that over the next week or so, but the most important thing this vacation did for me was to relight my inner fire. Pre-vacation, I was struggling.  My runs weren't going well.  I was totally burned out by the heat in Virginia.  I was just tired all the time. I constantly found myself escaping to the computer, but not to actually do anything productive.  I just needed a break from "real life." For two weeks, I took a nice break. I mostly left my job at home.  I only ran 3 times all week and two of those were races.  We ate out way more than we have on any vacation since we had … END_OF_DOCUMENT_TOKEN_TO_BE_REPLACED 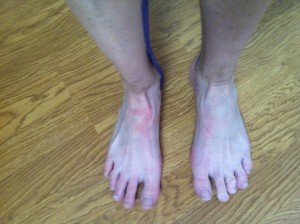 Some day I'm going to choose a race that's "flat and fast". But, that would require actually reading the race course description before I sign up. I recently completed Oregon by running the Deschutes Dash 10k in Bend, OR.  I thought I was running a flat race on a paved path by a river.  I was right about being by the Deschutes River.  In fact, at one point, I was mere inches from said river. The race was a very low key part of a multi-sport event.  There were also an Olympic distance triathlon, an Aquabike, and a duathlon going on at the same time.  The race start was in a parking lot near the transition area - very few signs for it and no one quite knew where to go.  Once we found the start, we were informed that there were no … END_OF_DOCUMENT_TOKEN_TO_BE_REPLACED 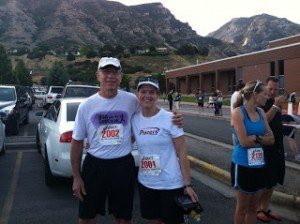 We traveled out to Utah for a family vacation this year.  We were able to make it coincide with the Pioneer Days race, so my dad and I ran the 10K and my mom ran the 5K.  To make things as challenging as possible ('cause you know altitude and a wicked hill weren't enough), we walked up the 1.5 mile trail to Timpanogos Cave the day before. Feeling good before the race Long story short, I was breathing hard from the first step, I thought my heart was going to explode *walking* up the big hill, and my legs ran out of energy completely at mile 4.  I truly was thrilled to even finish.  The below pictures tell the story pretty well, LOL. "This hill sucks, but I can give you a … END_OF_DOCUMENT_TOKEN_TO_BE_REPLACED 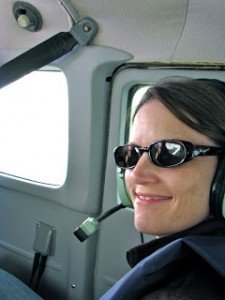 Fifteen years ago, I discovered I get seasick.  We went on a small boat cruise out of Juneau, Alaska for our honeymoon and it quickly became apparent that I could not drink alcohol AT ALL when on the boat.  As long as I didn't drink, I was just a bit queasy.  Over the years, I've had a number of opportunities to confirm this, including a boat trip between islands in the Azores with rough seas while suffering from morning sickness with Jones.  Last year, I tried a non-drowsy formula of dramamine and managed to survive a boat ride out to the Dry Tortugas.  The waves were huge and I think Beer Geek, myself, and the crew were the only ones who didn't get sick. So, when Beer Geek suggested that we take a float plane ride over the glaciers, … END_OF_DOCUMENT_TOKEN_TO_BE_REPLACED 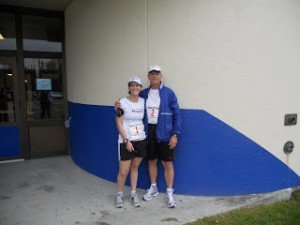 In addition to my 11th state race report, this is my "Half minus a Half" race report for G and my snapshot of my run for Tonia. Short story: 1:30:42 on a 9.65 mile course (9:24 average pace) Long story (grab your lunch before you start): Once we set our dates for our Alaska trip, I started looking for a race we could do while there.  The only race that was near where we were going to be was the Soldotna Unity run.  It had two options - a 5k and a 10 miler.  I'm trying to avoid 5ks to the extent possible for my state races, so that left us with the 10 mile option.  In past years, about 30-40 people run the 10 miles and this year was no different.  I consider myself a "middle of the pack" runner, but that was not the case here. … END_OF_DOCUMENT_TOKEN_TO_BE_REPLACED 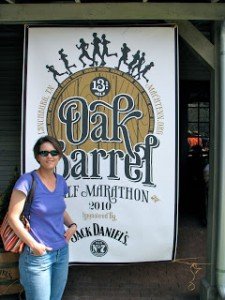 After a week of spring break down in Mississippi, we headed up to Lynchburg, Tennessee for the Oak Barrel Half Marathon. Poor Shoo had a stomach bug, so we ended up stopping multiple times for him. What should have been an 8 hour drive ended up being quite a bit longer. Finally, we made it to Lynchburg and headed over to the Jack Daniel's Distillery to pick up my race packet and take a tour. The tour was awesome and I highly recommend taking it if you are ever in the area. I enjoyed it, despite hating the smell of whisky and suffering from flashbacks to college football games. ;o) Saturday morning, Beer Geek woke me to tell me that a huge thunderstorm was going to hit right as the race started. I quickly headed over to the start line … END_OF_DOCUMENT_TOKEN_TO_BE_REPLACED 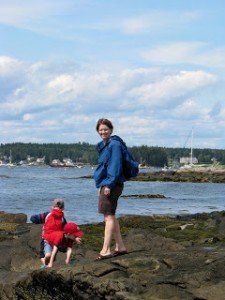 Running in Maine in the summer rocks! My body is used to heat and humidity, so getting the chance to run without that resulted in some awesome runs. Besides my PR in the race, I managed to run three awesome runs. The house we stayed at (Anne's Seaview Cottage, which was awesome) was on a hilly road, with a few side roads that were awesome for speed work. My slowest run was a 5 mile run in 45:29 (9:05 average)! I also did a run with some speed work in the middle and managed 5.5 miles in 48:19 (8:47 average). My final run of the week, which was at what felt like an easy pace, ended up being 4.5 miles in 38:55 (8:39 average). Wish I could always run that fast without feeling like I was pushing myself! In our last couple of days, we went out … END_OF_DOCUMENT_TOKEN_TO_BE_REPLACED

OK, maybe it was just purgatory.  Last night I hit the treadmill at 8:30pm for a 10 mile run.  I watched "27 Dresses" while I ran.  I purposely ran it slow so I could actually watch the movie, so I ended up averaging a 10:30 pace.  After I got done, I could not settle down.  It was midnight before I could even try to sleep and sometime after 1 when I finally dozed off, only to be woken by Shoo.  I think running after the kids go to bed will only be a last resort in the future.  Since I was already tired from staying up too late while Beer Geek's out of town, I'm barely coherent today.  The last time I was this tired, a newborn was involved. I had dinner this week with the woman who got me hooked on racing.  She's the mom of one of Jones' … END_OF_DOCUMENT_TOKEN_TO_BE_REPLACED