1. While they were here, my parents bought Jones his Christmas present – a new bike.  The scarey thing is that he’s tall enough for a 26″ wheel with a small frame, which is a size I could ride (I’m right at the point between the small and the medium).  Is it bad that I’m seriously considering buying the medium frame bike as well.  I figure I can ride that until he needs it and then I can ride the small until Shoo needs it.  By then Jones will have likely moved up to Beer Geek’s bike and Beer Geek will be due for a new one.  This whole process started because Shoo decided his bike was too small and he took possession of Jones’ old bike. It’s musical bikes around here.  (And my awesome parents also bought Shoo a bike, since he always gets hand me downs.  So now we have two 16″ bikes, two 20″ bikes, a 24″ bike, a 26″ small frame, and Beer Geek’s 27″ bike.  And I somehow I’m still the only one without a new bike.  See note above about buying the other bike LOL)

2. I recently won a Fit Bike on Angie’s blog.  It took a little more to put together than I expected, but it’s assembled and hanging out in our living room.  I have yet to ride it.  Jones and Shoo, on the other hand, have put many many miles on it already. 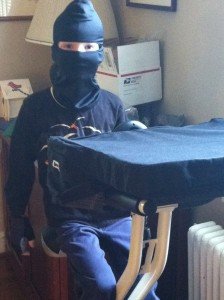 3. Thirsty Thursday – I’ve been slacking on this a bit.  I just haven’t had any new beers lately that have knocked my socks off and it seems lazy to write about a past beer.  Last night changed that.

I received a bottle of Seduction by Ommegang as a birthday present.  We popped that baby open last night for a change from our usual routine.  Oh.my.goodness.   Usually when we share a big bottle of beer, Beer Geek gets the lion’s share.  Not last night.  I drank 2/3 of the bottle myself.

Seduction is brewed by Ommegang Brewery in Cooperstown, NY.  It’s one of their limited edition beers.  Full bodied, smooth, and chocolatey, it was quite a tasty dessert beer.  (Should I admit I drank it with a bag of Cherry Berry Granola from NatureBox?  No?  Ok, I didn’t then.)  I loved it and it was only 6.8% alcohol, which is practically non-alcoholic compared to the beers I usually choose.  I definitely recommend it if you like dark, sweet beers. 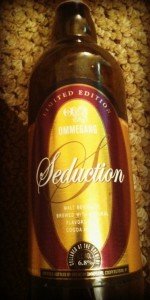