You are here: Home / Marine Corps Marathon / Tips for Night Races (and a few thoughts from MCM)

I have to admit, I’m still riding a bit high from finishing the Marine Corps Marathon. I was pretty sure I could do it, but I had enough doubt in my mind that I carried enough cash for a cab and also had my metro card. Yes, I believe in being prepared.

Know what else is a amazing? By Monday morning, I was barely sore. Seriously. I did five loads of laundry (2 flights of stairs between the hamper and the washer), went grocery shopping (where someone did not believe I’d run a marathon because I was walking normally LOL), and took Shoo to the doctor (where we went up and down multiple flights of stairs.) Feeling fine really blew my plan of spending the day sitting on the couch eating bon bons.

Anyways, MCM was such an awesome experience for a lot of reasons, but I’ll share that in my recap soon.  Instead, let’s talk about today’s topic “Night Races.” Patty,  Marcia, and I want to hear your tips and experiences.

I’ve written some tips for running in the dark, but I’ve only “raced” at night 3 times: a twilight 5k (that really wasn’t that dark), Ragnar DC (where I ran at 1am, and Ragnar Cape Cod (where I ran around 10pm.) I would hardly call myself an expert, so I hope that some of you link up some good tips. 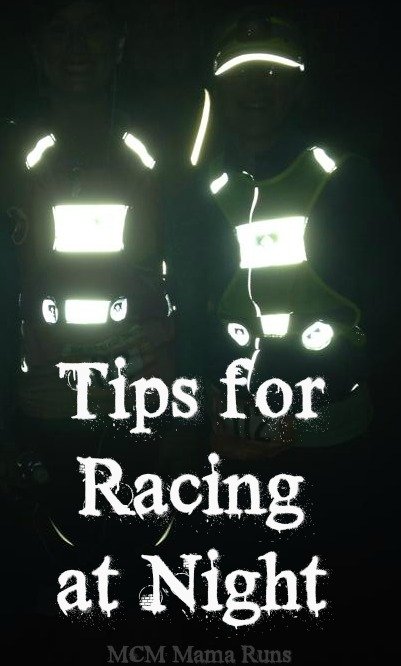 Here’s what I’ve learned from my night time races: