You are here: Home / travel / Tourists in our own town: Udvar-Hazy Air and Space Museum

This summer has been… different.  Not only have the boys chosen not to go to camp, but it has rained nearly every single day.  And it’s not a refreshing rain – it just makes everything feel humid and oppressive.  We are feeling a little stir crazy because of it.

After a nice 3 mile tempo run (went surprisingly well considering the humidity), I decided we needed to get out of the house.  We headed over to the Udvar-Hazy Air and Space Museum.  We’ve probably been there at least once a year (or more) since it opened, but it never gets boring.

Like most of the Smithsonian museums, Udvar-Hazy has free admission.  Unfortunately, they charge $15 to park.  Since it would cost me close to that to use the metro and it’s way cheaper than the entrance fee to many non-Smithsonian museums, the $15 doesn’t bother me much.

There are three reasons my kids prefer this location to the one downtown: 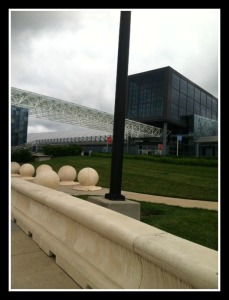 Shoo has been addicted to watching the Military History channel, as well as any you tube videos he can find of WWII planes.  Visiting Udvar-Hazy was the perfect activity for him.  The most amusing (and kind of annoying) part was how much he knew about each of the planes from that era.  (He’s obsessed with the Red Baron.  I kept making him mad by telling him that Snoopy shot the Red Baron LOL).  Coincidentally, I was in the middle of reading Unbroken by Laura Hillenbrand, which tells the story of runner Louis Zamperini who fought in B-24s in WWII and was a POW in the Japanese camps, so it was interesting to see planes from the story.

We saw our old favorites: the R2D2 mailbox, La Cucaracha, the Mothership, and, of  course, walked every ramp in the place. 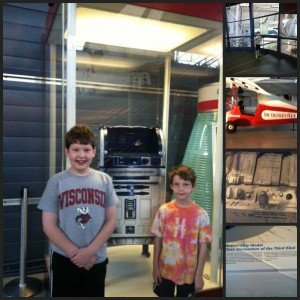 We also saw two new things:  the behind the scenes work area and the Space Shuttle Discovery. 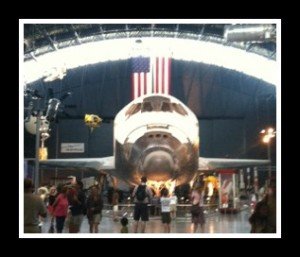 It was particularly cool to see the shuttle since the boys had seen it being flown there when it passed by their school.  (Yes, I hate the summer heat and I hate the traffic, but DC does have its perks…)

Because taking the kids to the museum was WAY cheaper than sending them both to camp (we won’t discuss the lack of time I have to actually blog, run errands, or do my paying job), we had lunch there (wish they had something besides McDonald’s) and we watched an IMAX movie after we wandered the whole place.  The movie we watched, Fighter Pilots, was interesting to all of us.  I had to keep closing my eyes, though, as I got motion sickness from the in flight sections.

After the movie, we went up to the Observation Deck, which was the only time all day that things felt busy.

All in all, we had a pretty awesome day!  If you are going to be in the DC area, I highly recommend it!  (Just as an FYI, it can be reached by bus from the airports and metro.)