I’ve never really sat down and written about my experience  on 9/11.  But as I biked my kids to school today on a day eerily similar to that day, I felt the need to get my memories on “paper”. Compared to many, my experience was pretty mundane.  I wasn’t in NYC or working in the Pentagon.  Despite having co-workers who were often in the Towers and living less than five miles from the Pentagon, I did not personally know anyone who was killed in the tragedy.  I was lucky, in so many ways, to be unharmed by the event. Yet, just like most Americans, 11 years later I can still remember in vivid detail how my day went and I don’t believe anyone was truly untouched.

Some random disjointed memories from the day:

The rest of the day/week was a blur of watching the tv and hoping my contractions would subside.  Occasionally a friend or family would get through on the overloaded phone system to check on me.  I watched 7 World Trade Center (where my agency’s NY offices were) collapse live on tv. I highlighted a map as Beer Geek drove home from St. Louis , where he’d been when the tragedy occurred.

Today is a day of many emotions.  I mourn the loss of those who were killed in the events of 9/11.  I honor those who gave their all to help that day and in the weeks/months/years afterwards.  I miss the innocence we as a nation had prior to that day.

I will never forget. 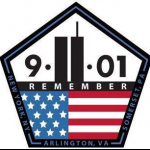