Short story: 12K in 1:08:20ish (I’m not exactly sure of my time as I forgot to hit stop on the Garmin, the official results are not up, and it was not chip-timed).

Anyways, I got up this morning and had my usual pre-long run breakfast of a peanut butter and jelly sandwich and some coffee. It was about 33 degrees out, so I bundled in a long sleeve technical tee and a fleece half zip with gloves and a fleece cap. At the last minute, I threw a lighter weight half zip into my bag and grabbed a baseball cap. Beer Geek and the boys decided to go with me, so we bundled them up for playtime on the ice while I ran.

It was a small race, but well organized. The weather was sunny and the temps started to rise. I quickly decided a clothing change was in order and changed into the lighter weight jacket and the baseball cap. Beer Geek snapped a quick picture and then I headed for the start line. Moments before the start, I tossed him my gloves. 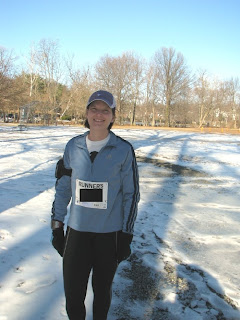 The race started with a short out and back and then another longer out and back. The second was pretty darn hilly! The beauty of running in my own ‘hood was that I’ve run most of the hills, but I still found the hills in mile 6 to be exhausting. I kept reminding myself “been there, run that” and for longer periods of time. I’d never tried to maintain this particular pace for this long before though. I went out with a goal of finishing under 1:10:00, which is a 9:23 pace. My mile splits ended up being 9:01,8:59, 9:06, 9:00, 9:02, 9:09, 8:58. I’m not sure of the half mile because I had a bit of an issue at the finish line and forgot to hit stop on my Garmin. 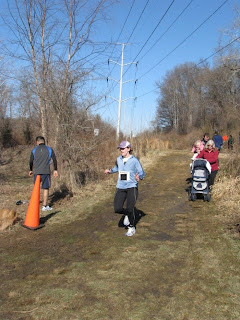 At the end, we had to negotiate down a slippery, muddy hill. I had the added obstacle of a family walking down with a stroller. Then you had to make a tight right turn and run to the finish. I stopped running at the bottom of the hill because I didn’t know where the finish was. I did get directed there, but I was just a little confused at the end LOL.

The best part of the race? I got to meet tfh (apologies for not spending much time talking at the end. I was just wiped out and starving.) 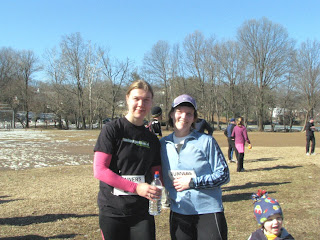 I really enjoyed this race and think it was a fun length. I left everything I had on the trail, though. I’ve never run that long before with nothing but water nor have I tried to maintain a 9 minute pace for that long. I think I’ll run it again next year, but take my fuel belt with gatorade in it. I also found out the difference between running 12K and racing 12K – I was exhausted and starving all day, way out of proportion to the actual distance of the run. All in all, I was pleased with my performance, but I do have a ways to go before I can keep that speed up for a half marathon.

Jones and Shoo had a blast playing on the ice while I was out running. I love that they are getting old enough to come watch mommy race!