In spring, we donated a “Craft Beer Dinner” to the annual PTA fundraiser/auction at Jones’ school.  Saturday was the first date that all three couples who won could make it.  Each couple paid a pretty penny to come to the dinner, and while I realize they did that mostly to support the school, I felt more than a little bit of (internal) pressur to provide a really good dining experience.

I decided to go with all Virginia beers.  I ROCKED this dinner.  Seriously. 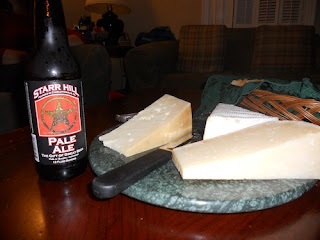 We started with a Starr Hill Pale Ale paired with an aged cheddar, brie, and trugole.   The brie was “meh”, the aged cheddar was good, and the trugole was not only amazing, but a perfect pairing for the beer.  (This cheese was so good that I “dumpster dived” in my own trash to find the wrapping so I can buy it again.   Yes, it was worth it.) 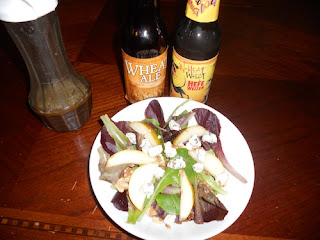 We started with the Williamsburg Wheat Ale paired with a Pear and Walnut salad with a Wheat Beer Vinaigrette.   I made the vinaigrette with Flying Dog’s In Heat Wheat because I had more of that.  Again, it was a perfect match.  (If you like blue cheese, I recommend that over the feta.  Both were good, but the blue cheese was better.)  Guests also got to drink some of the Flying Dog as well because it took me a bit of time to plate everyone’s dinner. 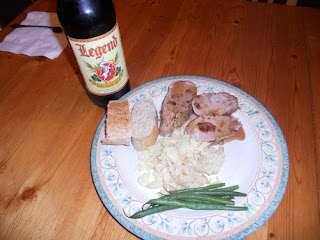 We paired Legend’s Brown Ale with Chipotle Raspberry Pork Tenderloin, rice pilaf, green beans, and bread.  I got the recipe (and the beer suggestion) from the cookbook “The Best of American Beer and Food”.  This recipe included the brown ale as an ingredient.  This was soooo good!  The only change I’ll make next time is a bit less cream in the “gravy”.  I think I would have liked a stronger chipotle bite, but we are fans of hot food here.  You can bet I’ll be trying other recipes from this book. 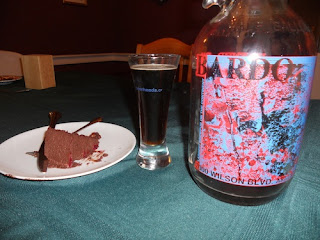 For our grand finale, we chose Mad Fox’s Wee Heavy to go with a chocolate cake/chocolate mousse/raspberry glaze dessert.  I’ll be the first to admit that I LOVE this particular beer.  I’ve followed Bill Madden (the brewer) all over VA to get this beer.  But it never occurred to me to pair it with dessert.  We stopped by Mad Fox on Friday evening for dinner and had a sampler to try to decide on a beer for the dinner.  Bill stopped by our table and, when presented with our dilemma, immediately suggested the Wee Heavy and chocolate/raspberry pairing.  As soon as he said it, we knew that was EXACTLY what we needed!

The food was good, the beer was awesome, and we had a fun time with some neighborhood couples.  I had sworn beforehand that I would not offer the dinner again, but it ended up going so well, I might do it again.

The rest of the weekend was pretty laid back and on Sunday I ran an easy 7 miles to sweat out all that beer.  ;o)