On Saturday, Beer Geek and I participated in the Washington Wine Academy/DC School of Beer’s Beer Walk.   It was a walk through the Crystal City Underground with multiple beer stations. 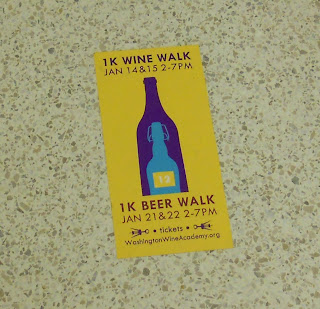 After our designated driver dropped us off (and took our kids – talk about a good friend), we stopped at the registration table aka Station 1, where we got “race” t-shirts, bibs, tasting tickets and tasting glasses.  The volunteers were super efficient and we were quickly on our way.

At the Station 2, I tried the Baying Hound Aleworks Long Snout Stout (which turned out to be my favorite beer all evening ) and New Belgium’s Snow Day.

The next station offered Port City beers where (as people who know me would guess) I enjoyed their porter.

Station 4 had Ommegang, Duvel, and Harpoon.  Why yes, I could have just moved in there.  They also had a decent selection of wine (not that I had any) and BBQ pork sliders  (YUM!) from Memphis BBQ.

We skipped Station 5 because, umm, I don’t like light(ish) beers.  (It was Yuengling – perfectly acceptable if you are into that kind of beer.)

Station 6 was a winner.  Bathrooms, a few seats, and Spaten and Magic Hat.  Magic Hat Howl was definitely in my top 5 beers of the evening.

Station 7 was the water station.  Luckily I didn’t want any LOL.

I think we skipped Station 8 (Anchor Steam and Bock), but I really don’t remember LOL.

Station 9 was Sam Adams, where I had a beer.  What beer?  Couldn’t tell you.  I also ate a bunch of Cabot cheese.  Kudos to WWA for free food stations along the way.

Because of our DD arrangements, we “had” to walk the course backwards.  This worked out really well for me as I was able to get a second and third taste of my favorites.  We finished back at the Long Snout Stout, where I used my last two tickets to get a double pour and called our driver to pick us up.

All in all, it was an awesome event.  It was sold out, but the layout made it so it never felt crowded.  I never had more than a minute or two wait for a beer.  The number of tickets was perfect for me to enjoy myself without imbibing too much (although Beer Geek said he saw that you could buy more.)  I highly recommend this event and will be attending next year.

Disclaimer:  I paid for our tickets and Washington Wine Academy did not ask me to review it.