You are here: Home / marathon / Aftermath: Where do I go from here?

As soon as I ran across the finish line, I came to a dead stop. Not because I wanted to, but because there was no place to go. It was complete gridlock. We slowly moved forward and got our space blankets, some water, and our medals. Then it was time for the picture in front of Iwo Jima. That was pretty cool, but after that, I (and some others) got directed the wrong way and ended up downhill from where the food was. I was in a bit of a time crunch as Beer Geek needed to leave town, plus I really wasn’t up for walking back up the hill, so I just headed to meet my family, knowing I had a Cliff bar in my dry clothes bag. Beer Geek met me on the way, as I was picking up my USAA finisher’s coin. 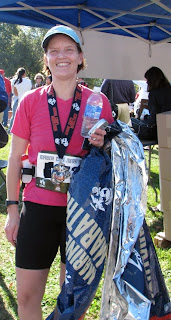 We found the boys, my mom, and Shoo’s Godparents. and took a quick family picture that we will likely use on our Christmas card.
Then Beer Geek headed out of town for the next few days and the rest of us checked out the festival before heading home. I bought myself a “finisher” hat to wear when running and then we decided to head out. The metro was insane, so we decided to walk up to the next stop. It was still insane, so we stopped at a coffee shop for a potty stop and a latte for me (the kids had eaten my cliff bar, so I had only had the gu’s, powerade, and a granola bar since breakfast). We then walked the rest of the way home. (It’s three miles from Iwo Jima to my house). Yes, folks, I did indeed run 26.48 miles (according to Garmin) and then walk 3 miles. I’m crazy that way.
Have you noticed I’m smiling in all the pictures? I felt AMAZING, considering I’d run a marathon! And if you know my real name, check out my finishers page on the Marine Corps Marathon webpage. Tons more pictures there – not all with smiles LOL. If you don’t know my name, email me and I may or may not tell you who I am ;o)

I was pretty much useless the rest of the day. Thank goodness my mom was here to make sure the boys actually got fed. I woke up Monday and was only moderately sore, but by the end of the day I had to pretty much crawl up the stairs. And in a house with two sets of stairs and no bathroom on the main level, that was pretty much hell.

At this point, though, I can walk. Up stairs. Without hanging on to the rail. Woohoo! My only real problem at this point is a popped blister on the bottom of one toe that is making walking difficult. Oh, and Viper, I celebrated with a 2002 Alaskan Smoked Porter that we’d been saving. Yummy!

So, what’s next? Maybe another marathon.. Wait, did I say that out loud? Actually, for now, a second marathon is a decision to be made at a much later date. I want to be a much stronger runner before I try (IF I try) again. I also want the kids to be older. Training was really hard on our family life this time around.

I’ve been scoping out some races for the near future. I’ll be running a 5K on Thanksgiving, which is not a distance I like and is unfortunately the easiest length to find. I’m also thinking about doing the Jingle Bell 10K in D.C. in December and the Suntrust Half Marathon in March (how cool is it that I’ve qualified for the half and the whole marathon with my 10k, my 10 miler, my half marathon AND my marathon times?!?) I’d really like to pull off a sub-2 hour half. ( I also considered the Zooma half again, but there’s an awesome beer event in DC the night before and that so takes precedence.) I’d also like to try some trail racing in the spring.

So, my marathon may be over, but I’ll still be running and I’ll still be right here jabbering about it. Thanks for joining me on the ride so far and stay tuned for more adventures.