You are here: Home / volunteering / Beautiful morning at the National Marathon

A few weeks ago I volunteered at a 5k and caught the “volunteering” bug. I knew that the National Marathon needed volunteers and I was able to get a spot at an early water station near a metro. Score! I convinced one of my “mommy” friends to volunteer with me, so we headed over there at 5:45am this morning! It was fun to ride the metro in with all the runners, but it felt strange to not be dressed to run. I kept having the urge to prove my “cred” as a runner LOL. 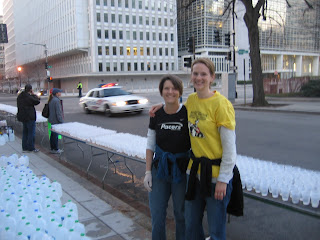 Shortly after we arrived at the station, the tables, cups, and water arrived. Just for the record, unloading boxes filled with 8 gallons of water is HARD work. It was chilly out but I was sweating by the time we got everything unloaded. Then we had to work crazy fast to get the power.ade mixed and all the glasses poured. I was volunteering with a few Pacers peeps, but most of the water stop was runners from DC Front Runners. They were a great group to work with and had the added bonus of a huge boom box rockin’ with ABBA. 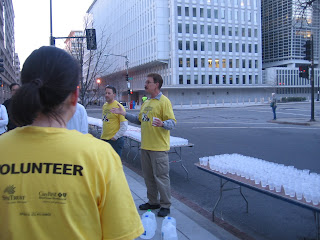 As we were still filling cups, the front runners came through. I’ve never been on the spectating end of a big race, so that was pretty cool! I snapped a picture, stuffed my camera in my pocket, and never got a chance to pull it out again. 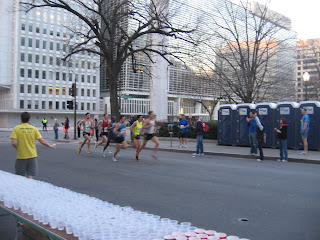 After an hour of handing out power.ade, my white sleeves are pink, my hair is sticky, and my voice is shot, but I had an awesome time! I got almost as good of an endorphin rush as I would have running. I could seriously make race volunteering my life’s work. While it was great to see the fast kids, it was even more fun to cheer on the people who were out there giving it their all, regardless of whether they would finish in the middle of the pack or farther back. I got to see a bunch of people I knew as well as a couple of bloggers (DC Running Mama and Tammy from A Life on the Run– I’m sure Tammy had no idea who I was when I cheered for her LOL).
I did learn a few things:
Kudos to the National Marathon group (including Dorothy) for organizing a great race and a big thumbs up to everyone I knew who was running. You all looked great at mile 5!