For only the second time since Jones was born, Beer Geek and I went away for TWO nights.  Woohoo!   And we went all the way to DC, a distance of about 5 miles LOL. 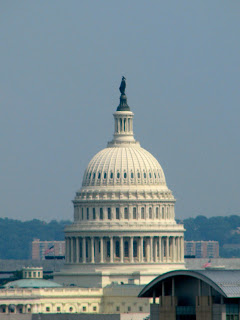 The view from our hotel room
After checking into our hotel, we headed over to the Brickskeller for the Lupulin Reunuless.  The speaker list read like a “Who’s Who” in craft brewing.  (Ken Grossman of Sierra Nevada, Kim Jordan of New Belgium, Rob Tod of Allagash, Sam Calagione of Dogfish Head, Greg Koch of Stone,  Bob Pease of the Brewers Association, and Bill Madden of Virginia’s brand new Mad Fox Brewpub) 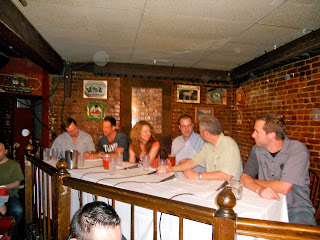 Each brewer had brought 2 beers for a total of 12 beers to taste.  As per usual, they’d brought some unusual and/or hard to find beers.  I finally got to taste the Fritz and Ken’s Ale and OMG it was every bit as good as Jamoosh said.  The beers were all quite good and the brewers were as entertaining as usual  (Greg Koch amused us with a word for word rendition of his quite wordy Arrogant Bastard label.) 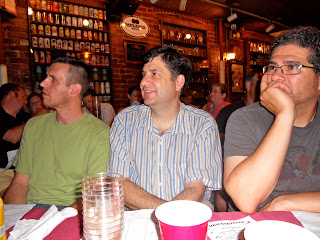 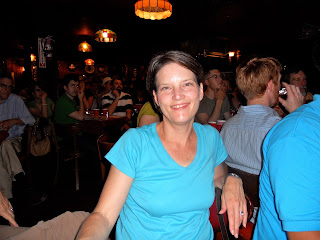 You might, however, notice the sheen of sweat we are all wearing and the fact that my hair is pretty much plastered to my head.  I’m not sure what the issue was, but the air conditioning was not sufficient for the number of people in attendance.  The combination of beer and heat seriously dehydrated me.   In fact, when we headed back to the hotel, I ended up drinking a glass of nuun (and probably should have had more.)

Saturday morning, we got up and went to the International Spy Museum, the American Art Museum, and the Petersen House (where President Lincoln died).  Unfortunately, Ford’s Theatre was closed this weekend.  After playing tourists in our own town, we headed to Gordon Biersch for lunch. 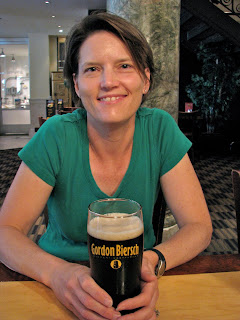 It’s suddenly summer here, so I “glowed” (as my v-ball coach used to say).
Finally, on Saturday evening, we got to attend the event that had me more excited even than finishing the marathon:  SAVOR!  We were super lucky this year and got tickets to one of the Private Salons, so our evening started an hour early and was kicked off with a 10 percent ABV beer!. 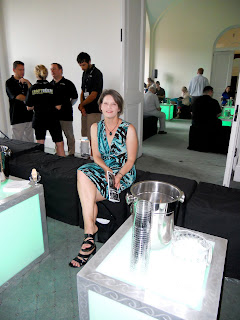 We got to enjoy Full Sail brewing’s 2006 Black Gold Bourbon Barrel Aged Stout paired with a chocolate covered cherry and their LTD #2 paired an Oregon goat cheese.  The food pairings were perfect!  The brewer and founder were interesting and knowledgeable, the swag was awesome (it included a Full Sail baseball cap), and the beer was plentiful.  It was an amazing kick off to the main event, held in the great hall of the National Building Museum. 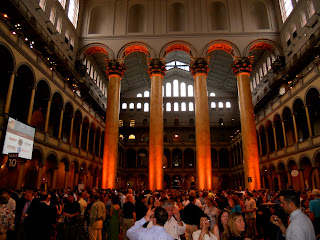 Our first beer in the main hall was Alaskan Smoked Porter.  As one of my top 10 favorite beers, I was NOT going to miss out!  It was as wonderful as expected and I also got the chance to ask about a new source for shipping their beer, as my usual source has gone out of business.  (If this doesn’t work out, I’ll be throwing myself on the mercies of my PNW bloggy friends.)
My second beer of the evening was Dogfish Head’s new release:  Bitches Brew.  IT.WAS.AMAZING. Seriously.  You can bet I’ll be figuring out where I can get this locally.
Next stop?  Meeting up with a Daily Mile friend and fellow beer lover! 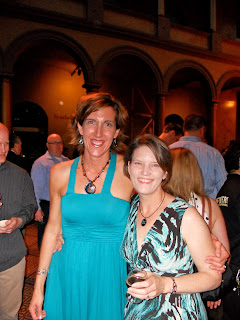 The rest of the evening was a blast.  I had some wonderful conversations with brewers and got to try some amazing beers.  Many of the beers were paired with chocolates, including one made with Old Bay seasoning.  The Old Bay chocolate was an unexpected combination that was phenomenal.    I’d like to say I remember every beer I tried, but I don’t.  I would definitely say it was a roaring success once again and I remain hopeful that it will take place next year and we will once again be able to attend.  What an amazing weekend!** 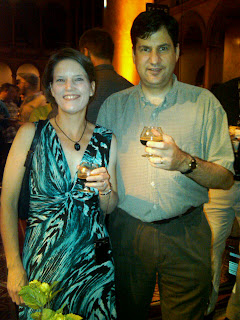 Thank you to SaranacBrewery for the only pic of the two of us.
And all of you who take pictures of yourself should be impressed by Greg Koch’s skill with the camera… 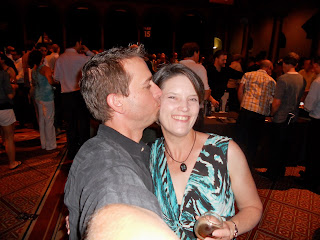 He could kiss my cheek and snap a perfectly centered picture at the same time!
Stay tuned for more pictures soon!  I haven’t run since Thursday, so I don’t have anything besides beer to talk about.  ;o)