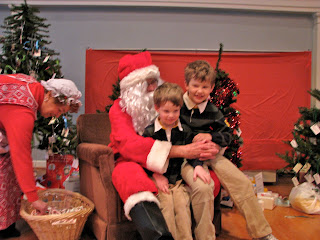 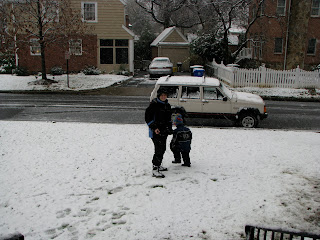 I had one of those “my brain is full” weekends. Beer Geek and I went out on a date so that we could discuss such exciting things as our health plan and the boys’ college accounts. Luckily, the discussion was accompanied by good beer and a piece of carrot cake the size of my head. Then on Saturday, we took the boys to breakfast with Santa. It was at Shoo’s preschool and I was on the committee, so I was a little busy with it. Saturday afternoon we played in the snow. Sunday was church, snow playing, running, craft fair shopping, birthday partying. When we weren’t doing those things, I was spending all my time online shopping for the boys. When I woke up this morning, I realized I hadn’t touched my blog all weekend. Oops.

Friday evening I went for a quick run before our “date”. The weather forecast called for freezing rain for Saturday and I pretty much refuse to run in 33 degree rain. Call me a wuss, but I won’t do it. I only had 30 minutes to run and the first mile went great, so I decided to do some speedwork. I apparently can’t plan speedwork, I just have to do it when my body is feeling right. Anyways, I decided to pick up to an 8 minute pace and hold it as long as I could or one mile, whichever came first. Success – one mile in 7:57. I ran a recovery half mile a little too fast, but picked it up again for another half mile of speed work – half mile at 7:48 pace. I was particularly pleased because I didn’t feel like I was even close to the puke threshold.
Saturday was not as nasty as expected, but I was glad I didn’t need to run. Virginia snow tends to be slushy and nasty and this weekend was no exception. It was particularly good packing snow, so Shoo and I did get to make a snowman and have a snowball fight.
Sunday was chilly and I was going to hit the treadmill, but Beer Geek guilted me into running outside. I way overdressed (I was cold before I changed into my running clothes) by wearing compression shorts under my running tights, my heaviest running fleece, and my heavy gloves. The run was just a nice, reasonably paced run only made exciting by the occasional black ice. I hit the first patch on a downhill and nearly wiped out. I quickly learned that if the pavement looked wet and it was in the shade, that it was likely to be ice.
All in all, it was a great weekend. Christmas shopping for the important people is pretty much done (just for the record, nothing has been bought for Beer Geek and myself – tells you where we stand LOL). I successfully ran 22 miles in the first week of December, so I’m on track for 100 for the month. The boys had a nice time playing in the snow and it’s become apparent we won’t be stuck inside much this winter. Shoo has reached the age where he loves to be outside, no matter how cold. I’ve decided not to race next weekend, so I’m officially done training and racing for 2009. Now I just need to work on some goals for 2010.
HBBC
12/4
Walking – 2 (love that a half point of this was walking to and from a brewpub)
Running – 3.5
F/V – 1
Total – 6.5
12/5
F/V – 1 (I worked really hard to get my F/V to prevent a zero LOL)
12/6
Walking – 1
Running – 3.5
F/V 1
Toning (upper/lower) – 1
Total – 6.5
Total for the week – 43.8