The Blue Ridge Marathon bills itself as “American’s Toughest Marathon.” I’m here to tell you that the half marathon is no joke either. It was definitely the hardest race course I’ve ever run on. 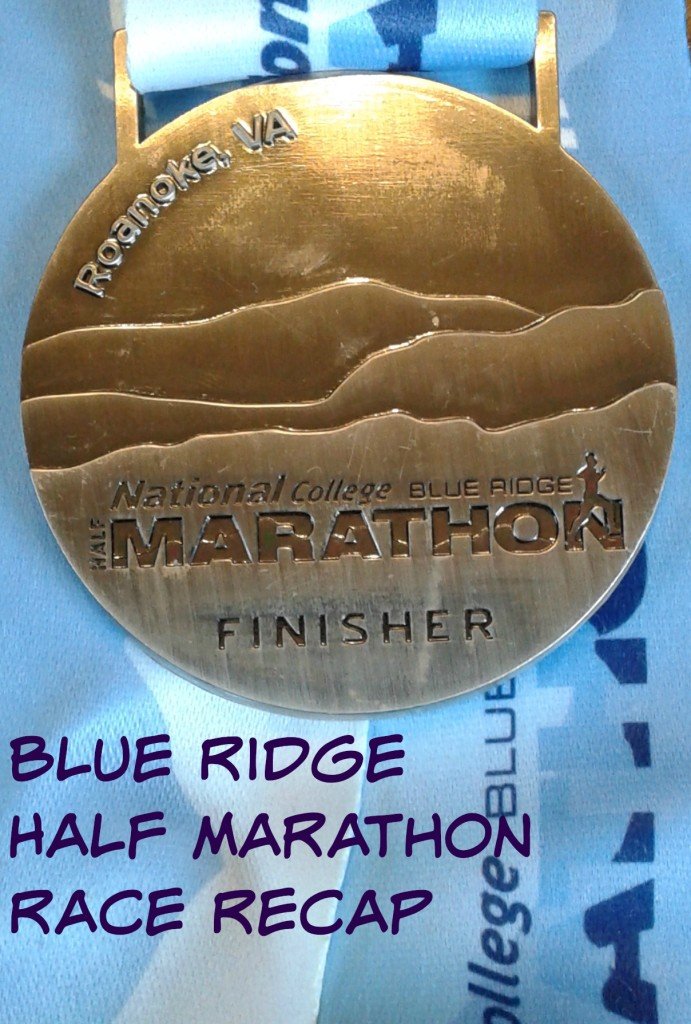 Short story: I finished in 2:20:48 (my slowest half where I wasn’t pacing someone), 13th in my age group and darned proud of my finish. At the end, I felt like I’d run a full marathon, not a half.

I caught a ride down to Roanoke with some runner friends. We stopped at a brewpub for lunch and a couple more for tastings. Thanks to small country roads (and the stops), it took us 6 hours instead of 4, but we finally got there. They dropped me off at my hotel where I immediately met up with T and R. We quickly picked up our packets and then were treated to a fabulous dinner by R’s husband. Then we did a drive through of the race course. Holy crap! I was kind of wishing I’d stayed clueless.

It really was a beautiful view…if you drove up to it.

See this star? It’s huge. It’s on a hill. We would have to run up to it. And then back down. And then we’d have 7 more miles to run. Yeah.

It was not a “hill”, more a small mountain.

Properly intimidated, we headed back to the hotel and within a very short amount of time, T and I were lights out. Not that I slept much. When my alarm went off, I hopped out of bed and made quick work out of getting ready. R’s husband drove the three of us to the start (this was majorly appreciated!) We hung out for a bit and met up with Lauren (another Tough Chik). 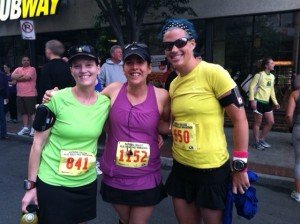 Black skirts, black “socks”, and bright shirts were the uniform of the day. 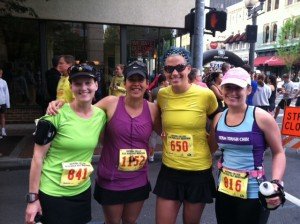 Then it was go time!

My splits pretty much tell the story. Mile 1 was a nice easy mile. Mile 2 had a hill and I walked a bit, but there was enough flat/downhill to balance the walking. Miles 3 and 4, well, picture a winding, mountain road going up a mountain and you know exactly what we were on. I walked all the steep uphills. Every.single.one. And I was ok with that. It wasn’t horribly hot, but I was completely drenched in sweat before the second mile was done, just from effort. Finally, we reached the top! But then we had a little surprise (that we’d discovered the night before): a gravel path! Gravel + Vibrams pretty much sucks. Luckily it was pretty short.

Let the downhill begin! This would be the race where I learned that downhill can suck worse than uphill. It was incredibly steep and windy. I alternated between flying down the hill and trying to restrain myself, depending on which body part was hurting the most between my feet, my quads, and my abs. I’ve never been so happy to see a downhill end.

My quads were shot, my feet were sore, I had a cramp in my side, and I still had 7 miles to run. I’m pretty sure I wasn’t hurting any more than that during the last 6 miles of the marathons I’ve run.

The Rest of the Race

In all honesty, if I hadn’t just run up and down a small mountain, the rest of the course would have been a nice course. Unfortunately, I was so dead from the first 6 miles that it felt like the hardest course ever. I nearly cried when we hit a hill during mile 7. I walked the water stops. I walked some uphills. I contemplated walking a few downhills. On one of the hills I ran up, my quads were so shot I felt my glutes working more than I’ve ever felt. I just kept moving forward. Slowly the miles ticked off. My legs were tired, it was hot and sunny, the bottoms of my feet were swelling, but I just kept going. Late in mile 11, my right foot started cramping. Until that moment, I was pretty sure I’d be faster than Zooma (2:18ish). But I just couldn’t push through that, so it became run until the cramp got too bad, walk until my heels hurt (tired body + VFFs = wicked heel strike when walking), run some more. Repeat.

Finally, I turned a corner and saw the 13 mile marker. And nearly walked it the rest of the way in. I have never before in a race been so close to stopping short of the finish. Instead, I started picking up speed. And my foot cramped completely into a ball, so I ended up limping the rest of the way in. One of the EMTs grabbed me (I was apparently kind of pale), but thanks to a coke that R got me and a few minutes of sitting, I was soon good to go. 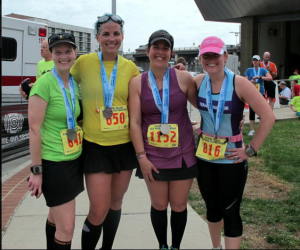 About the Blue Ridge Marathon/half marathon:

This race was really, really well run.  It was easy peasy from a logistical standpoint.  The actual volunteers were awesome.  There were water stops galore as well as some food options while running.  The Roanoke residents were also awesome.  There were a few extra water stops.  People were handing out candy.  We got lots of cowbell.  ;o)  Not a single thing went wrong and I felt well supported at all times.  And their food spread at the end (not that I could eat much besides a coke and some fritos) was pretty impressive: bananas, bagels, pizza, shrimp cocktail, barbecue sandwiches, lots of drink options…. 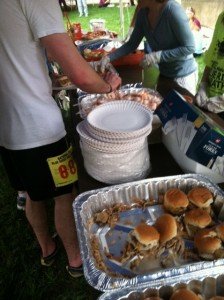 Seriously, people, shrimp after a race…

About racing in Vibrams:

This was a hard course to run in my Vibrams.  The uphill wasn’t bad, but the downhill was really hard on my feet and legs.  Add in a short stint on gravel and my feet were pretty done at the end.  My right foot cramped for the last twoish miles, my left calf cramped right where it hits my ankle for the last mile.  It will be a LONG time before I attempt a marathon in them, but all in all, it was not a problem to be in Vibrams.

The hills tore me up though.  Shortly after the race, my calves started to cramp badly, leading to this questionable fashion choice: 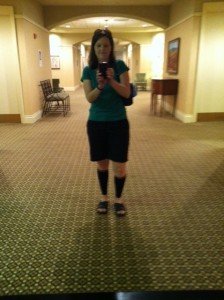 Yesterday my quads were so sore I could barely walk up and down the stairs (I swear my legs felt just like they did after a marathon).  Today my quads aren’t so bad, but my calves are tight and sore.  My feet, surprisingly, feel fine.  I’m going to attempt an easy three miles on the treadmill today (no way can I handle the hills in  my neighborhood right now LOL) and some yoga tomorrow and then I should be good as new.