Today on Tuesdays on the Run, we are talking about our bucket list of races. For me, I’ve never been tempted by the big marathons, like Boston or NYC. I think it’s because I live in a big city myself, so big races don’t excite me. There are lots of races out there that I’d love to run, but here’s one that has been on my radar for a while and I WILL get to someday: the Bend beer relay AKA the Bend Beer Chase. 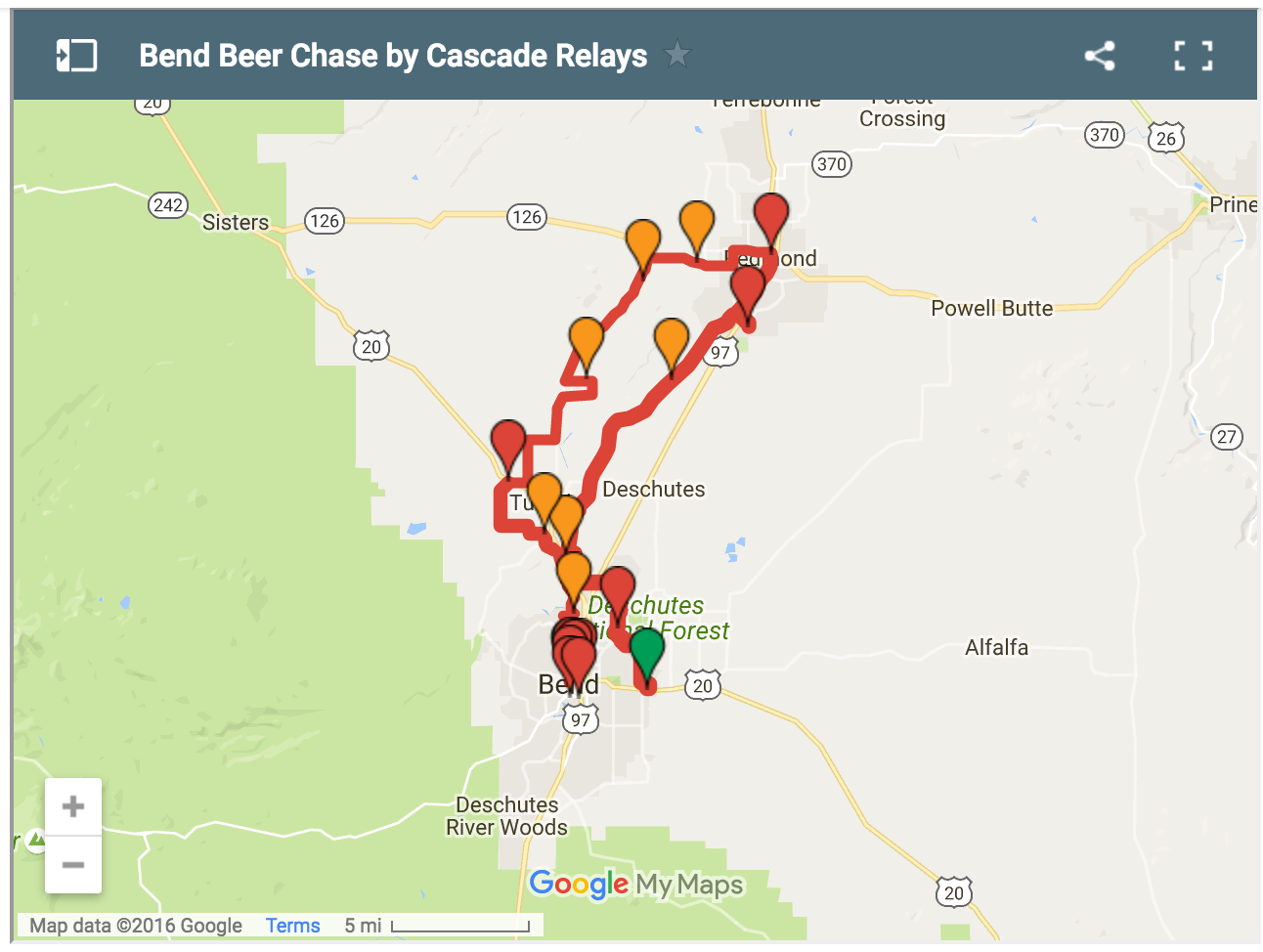 When someone says “Relay Race”  most of us think of races like Ragnar or Hood to Coast or American Odyssey where you have more than one van and run through the night.  These are great races and a lot of fun, but there’s another option that’s been gaining in popularity: the one day relay. The one day relay is usually closer to 70 to 80 miles, uses one van, and finishes in the evening of the day it started.  This is a great type of race that requires less of a commitment on the part of the runner but still offers a lot of fun.

Want to know how to make that even better? Add beer. That’s right you can run the Bend Beer Chase which is a relay race that includes breweries.

The Bend Beer Chase is a one-day, 70 mile relay that starts at Worth Brewing in Bend.  Each team of 6 (or fewer runners) will set off towards Redmond, then head to Sisters, and return back to Bend. In a 6 runner team, each team will run 2 legs with the legs varying from 4-8 miles.  So far that sounds just like any other one day relay, right?

Well, this one adds a bit of fun: beer samples at each of the brewery exchanges. While every van has to have a designated driver, there are opportunities to have a small (3-4 oz) beer at exchanges with breweries.  To add to the challenge, one of the stops is even at a distillery.  Runners have the opportunity to try libations at Worthy, Wild Ride, Smith Rock, Three Creeks, and Bend Distillery as part of the 70 mile relay.

The race ends with the Keg Leg in downtown Bend. The Keg Leg offers stops at 6 Bend breweries: Silver Moon, Bend Brewing, 10 Barrel, Deschutes, Rat Hole, and Crux. As you might imagine, the vans are no longer a part of the event at this point. Runners run between breweries, sampling at each, until they end up at Crux Brewery for a finish party and awards.   (Don’t want to do the whole relay? Individuals can opt to just participate in the Keg Leg aspect of the race.) Don’t forget to make sure you get your Bend Ale Trail passport so you can count all the breweries towards your prize for hitting 10 or more Bend breweries!

This article was authored by MCM Mama and first published in 2015 on the Runhaven site. Copyright 2015 MOKO Mobi, Inc. Used by permission of MOKO.Mobi, Inc.