You are here: Home / Ramblings / Camping with the Princess

Jones is a bit, umm, high maintenance.  He’s been that way since day 1.  I will say we’ve seen improvements every year and he’s way easier than he was when he was little, but he’s still a much more demanding child than Shoo.  He also has some sensory issues and can feel microscopic rocks in his shoes, under his mattress, etc.  Hence, the princess reference.

Yesterday, we went camping with his cub scout pack.  It was a fun day of hiking, orienteering, skits, and s’mores by the fire.  Oh, and a “man meal” – hot dogs, hamburgers, and chips.  All in all, it was a well organized, fun event. 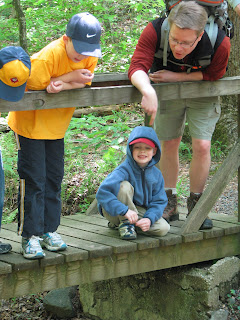 Then we went to bed.  Or should I say “to foam mattress on the hard ground.”  The cold hard ground. With a mattress that felt sufficient when I went to bed, but felt just like ground by the time I got up. 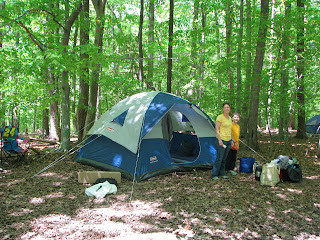 Notice how I didn’t mention any sleeping in there?   Shoo’s head hit the pillow and we didn’t hear from him until morning.  In fact, at one point in the middle of the night, I poked him to make sure he was breathing.  Jones, unfortunately, was not so lucky.  He had an allergy attack that took us a while to get under control.  Then, I was too cold to sleep and unwilling to get even colder by getting out of my sleeping bag to find more clothes.  Jones woke up cold and put on a sweatshirt, at which point I grabbed Beer Geek’s sweatshirt as well.  Then he woke up hot.  Then he couldn’t fall back to sleep.  Then he was cold again.  Then he needed to pee at 5:15am, so Beer Geek took him to the bathroom (and I had to give up his sweatshirt.)  I got up at 6:15 because I’d never been able to fall back to sleep.  I think I may have gotten an hour of sleep last night.

Jones?  He fell back to sleep at 5:15 and slept so soundly we basically had to pull him out of the tent as I was dismantling it at 7:30, sigh.

I was planning to run 6 miles today.  Between allergies, dizziness from lack of sleep, and sore hips from sleeping on the hard ground curled up in the fetal position trying to stay warm, I’m not betting on it.

On the bright side, my Merrell Barefoot Pace Gloves ROCKED as a trail shoe!

(Don’t forget to comment on my giveaway!  One awesome piece of clothing (your choice) from Mondetta!)