You are here: Home / Uncategorized / Celebrating Mother’s Day with a PR!

Of course, never having run a Quarter Marathon before, I was guaranteed a PR today LOL.

After a night of virtually no sleep (thanks to insomnia and Jones), I got up at 4 am to be at the race to volunteer at 6am.  It was about 50 degrees and majorly windy, so I was pretty chilly in my shorts and long sleeve tech shirt with a short sleeve tech shirt over the top.  When I got to the race, I got warmed up by unloading a bunch of the metal barriers to make the finishers’ chute and protect the timing tent.  Unfortunately, I then spent the next hour at the bag drop and was so cold I was having trouble holding the markers to write on the bags.  I nearly decided to run with the long sleeve shirt on, but one of the guys there convinced me that I’d be too warm.  Of course, that meant I had to strip down to my running bra and then just put one shirt back on.  Pretty sure that didn’t help with the being cold issue!

I met up with a bunch of friends and planned to go slowly.  But we all know about the “best laid plans”.  I ended up getting separated from the mom I going to run with and ended up with a different mom, who was running a bit faster.  We did the first mile in 9:14.  Oops.  Hmm, better slow down.  We finished mile 2 in 9:13.  Crap.  Really better slow down (although, honestly, I was feeling awesome and wasn’t working all that hard.)  I let my friend move ahead while I walked through the water stop.  I figured now that I was by myself, I could slow down.  I tried to run easy, but every time I looked at Garmin, it was saying 8 something or 9 something.  I finished mile 3 in 9:15.  At this point, I decided to call it a tempo run and just go with it.  Mile 4 was 8:56.  Mile 5 was 9:04.  Oddly, I didn’t feel like I was working all that hard.   Somewhere in mile 6 I came upon my friend.  This is where I would have normally started really picking it up, but I decided to keep running easy with her and we finished that mile in 9:23.   We took it easy for another quarter mile or so, but then I convinced her to pick up the pace.  Bad friend that I am, I ditched her at the very end to fly across the finish line.  Why?  Because there were two guys running just ahead of me and I couldn’t resist “chicking” them.  Final time: 1:00:##.  It was probably a good thing I never looked at Garmin towards the end or I might have hurt myself trying to break an hour.  Now I just have to hope that my speedier than planned race doesn’t hurt me next weekend.

All in all, it was a great race, despite the wind that we hit on the last mile.  As soon as I was done, I raced home, grabbed a quick shower, and headed to church for Jones’ First Communion.  From runner to mother in no time flat. 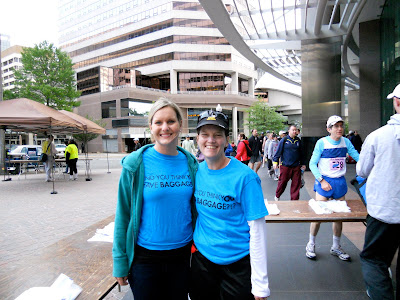 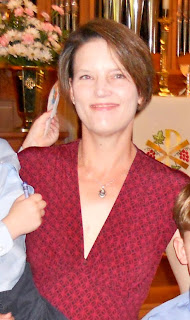 Happy Mother’s Day to all of the awesome moms I know!