I’ve run or volunteered at the Clarendon Day race every year since it started. Most years I run and volunteer and this year was not exception.

The race starts at the top of a big long hill and ends about a mile and a quarter away at the bottom. Depending on which distance you run, you go out on a flat to rolling hills section at the bottom of the big hill before heading to the finish line.  Those who are brave (crazy?) enough can run the 5k, get back up the hill, and run the 10k.

I started my weekend with a volunteer stint at packet pickup.  I always love the questions about how you are supposed to get back up the hill.  Umm, it’s just over a mile, how ’bout you walk?  (To Pacers credit, they provide metro cards at the finish line so that you can metro the two stops back up the hill. ) Anyways, had my usual fun time and the shirts this year were awesome, even if the colors were a little too close to Virginia Tech colors for comfort. 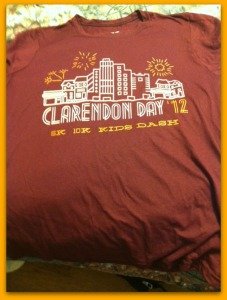 Saturday morning came a little earlier than I like, but after a quick PB&J, I headed over to packet pick up again.  It was pretty insane.  We were moving the line as fast as we could, but I’m pretty sure I didn’t stop moving the entire time I was there.  Finally, at two minutes to 5k gun time, I handed my line over to another volunteer (people were still picking up bibs for the 10K) and headed to the start.

I had debated long and hard about which race to run.  Originally I planned to run the double.  Then I dropped to the 10k.  When we got Shoo’s soccer schedule and I saw how crazy my day was going to be, I dropped back to the 5k.    I don’t have a whole lot to report about the actual race.  I didn’t use the hills as well as I should have (8:33 and 8:31 for the first two miles, which are usually in the 7s) and I didn’t slow as much as I usually do in the third mile (8:59 vs my usual 9 something).  End result?  26:58 which is about 2 minutes off my course PR.

Then I ran and walked back up the hill, just to see if I could make it to the start line in time for the 10K.  I did indeed make it with a few minutes to spare, but decided to stick with my decision to run home and start our day.

The rest of the weekend involved a visit to the Clarendon Day festivities, Shoo’s soccer game, purchase of a leopard gecko, and an Octoberfest at Mad Fox. 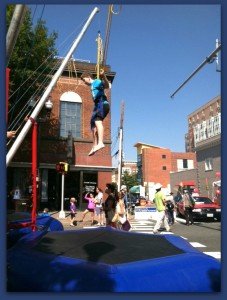 As you might imagine, I could really use a weekend to recover from my weekend!