You are here: Home / half marathons / Lifetime Half Marathon #51:Coastal Delaware Running Festival 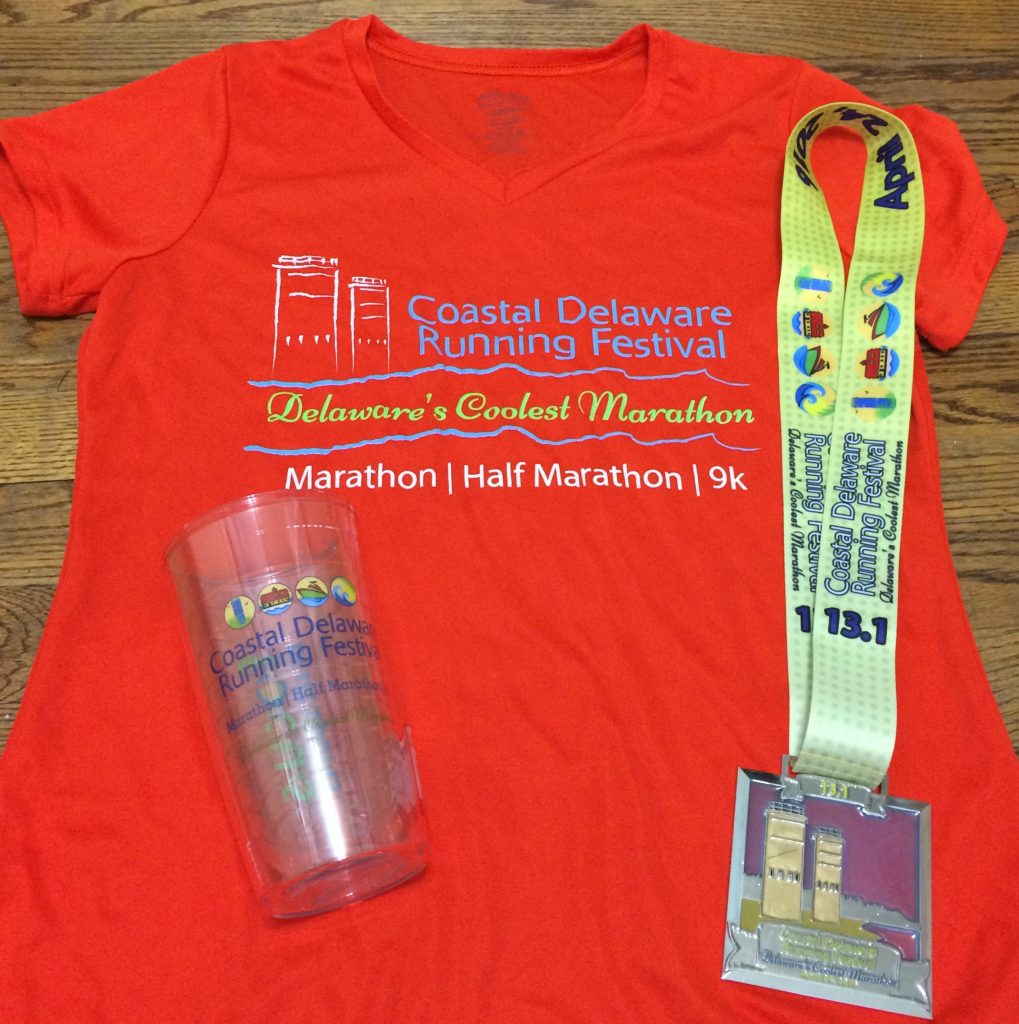 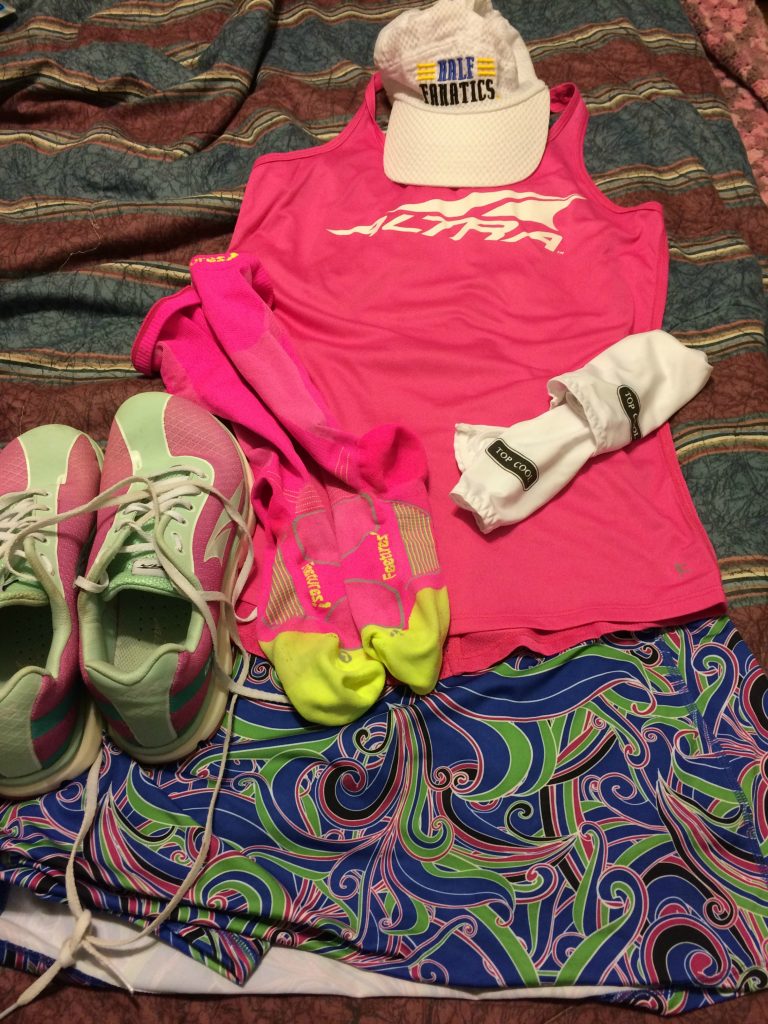 The hardest part of Coastal Delaware half was actually getting to Dewey Beach and getting my packet. We left a bit later than planned on Saturday morning and ended up having a traffic filled drive. Finally we arrived safely to our hotel and dropped the boys off before we headed over to packet pickup. Beer Geek dropped me off and went in search of parking (probably the second hardest thing to deal with in Dewy) while I worked my way through the lines at packet pickup. The lines seemed long, but went surprisingly smoothly and I was quickly out of there with my bib, t-shirt and cool new shirt. 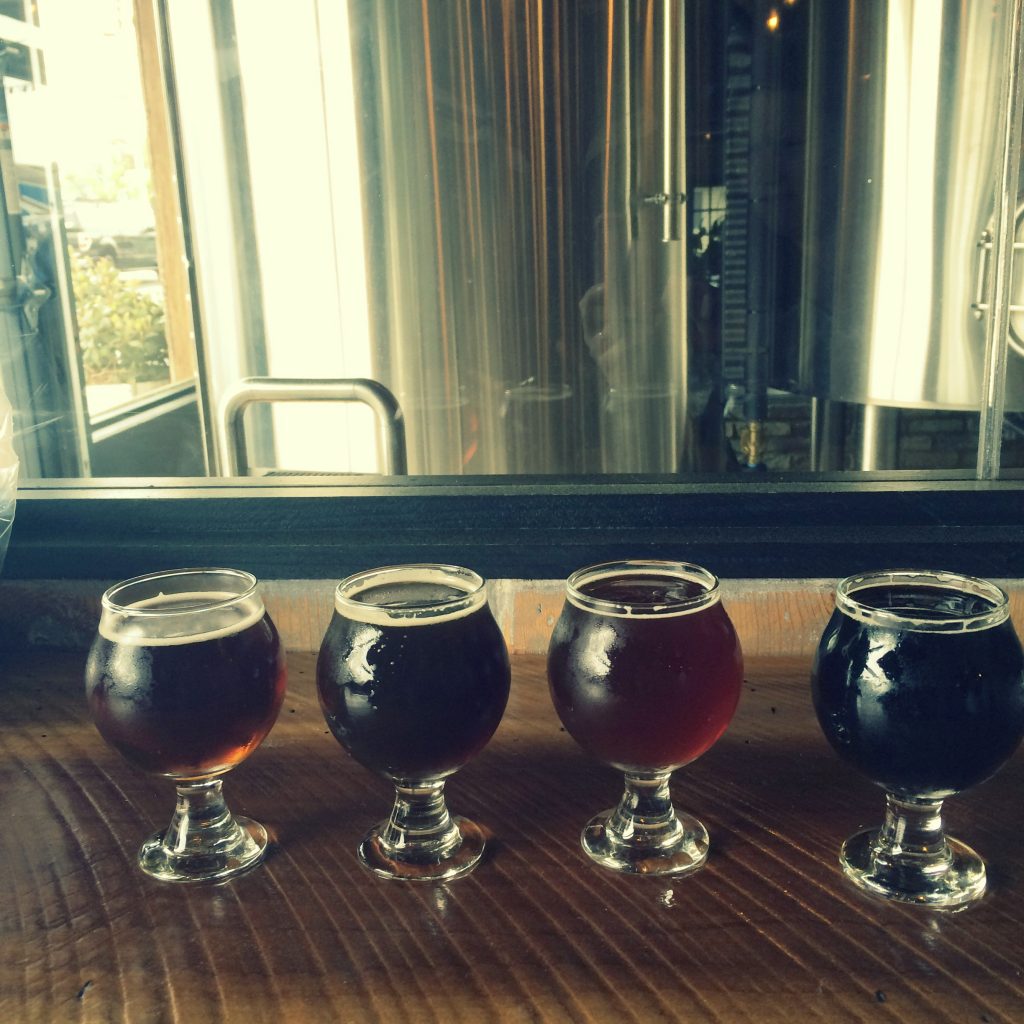 I met Beer Geek for a quick sampler at the Dewey Beer Co before we headed back to the hotel and a walk on the beach. 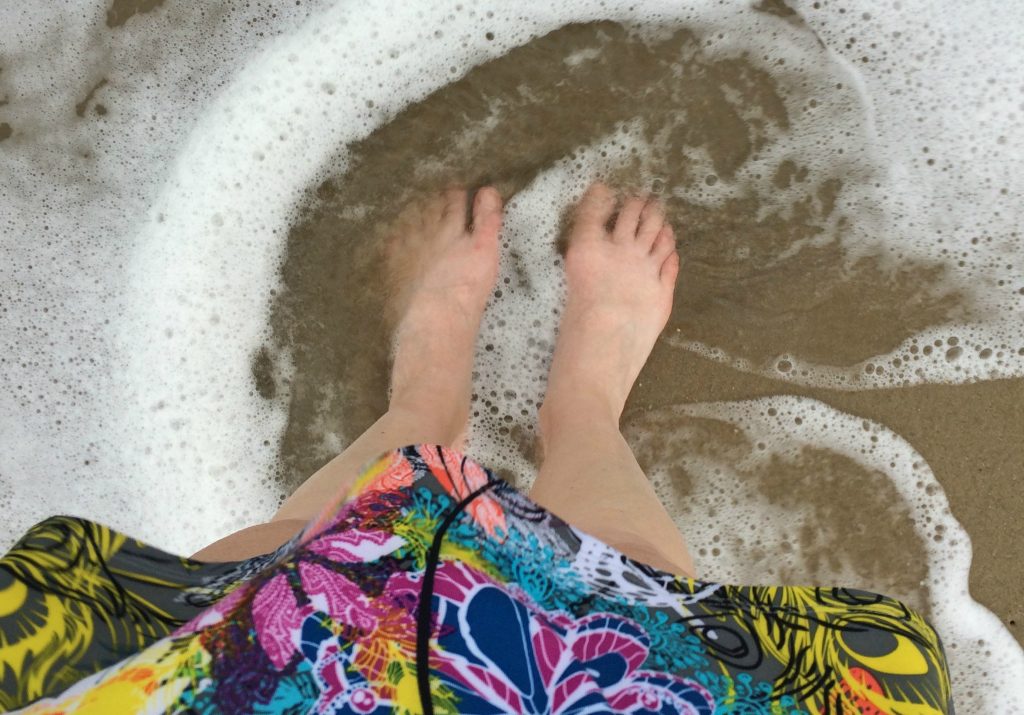 It was cool, but sunny, so I took the opportunity to dip my toes in the water. Brr. Then we headed to dinner at Dogfish Head Brewpub. 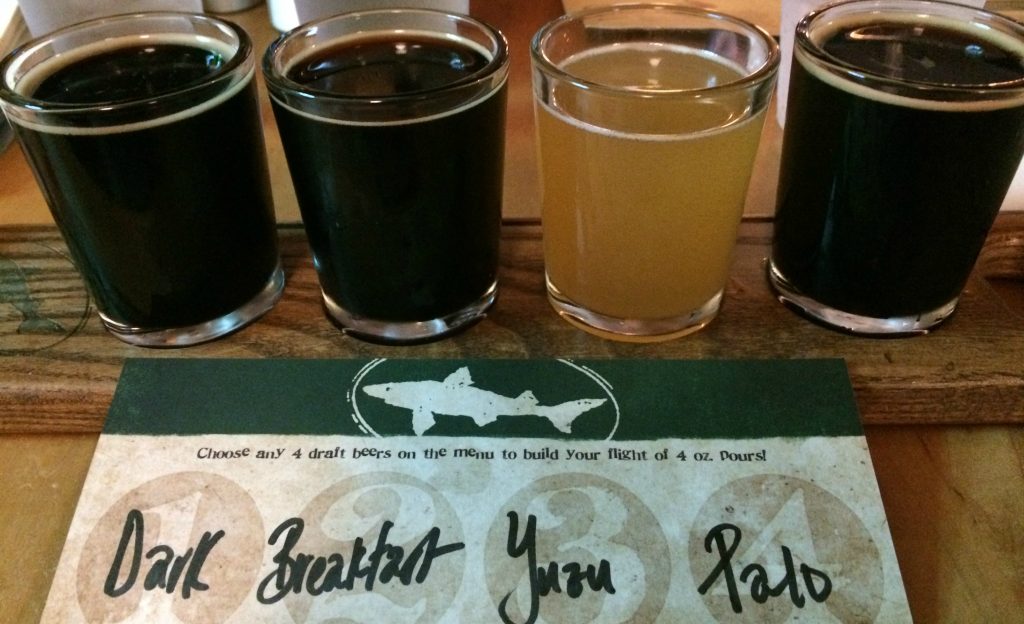 I’m a huge fan of DFH and they did not disappoint. I had a sampler of 3 beers you can only get in the Rehoboth Beach pub and 1 of my favorite beers (Palo Santo Marron)that I don’t find on tap often. Then it was back to the beach with Shoo for two hours. 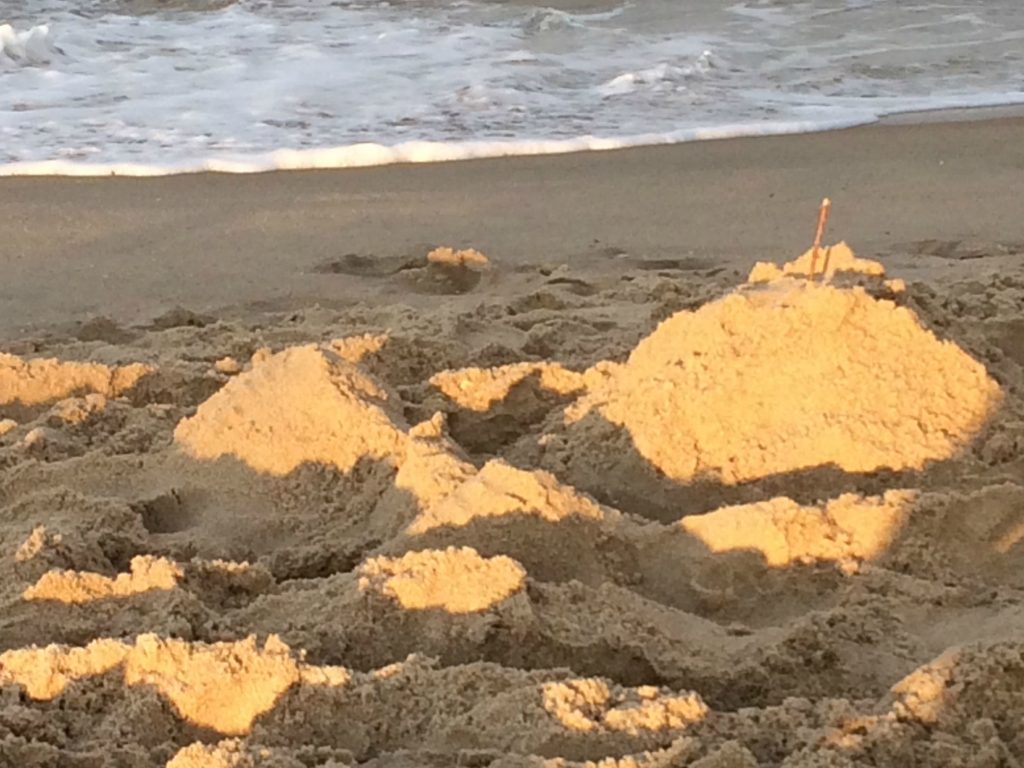 I can’t believe he actually went as deep as his knees in that crazy cold water. 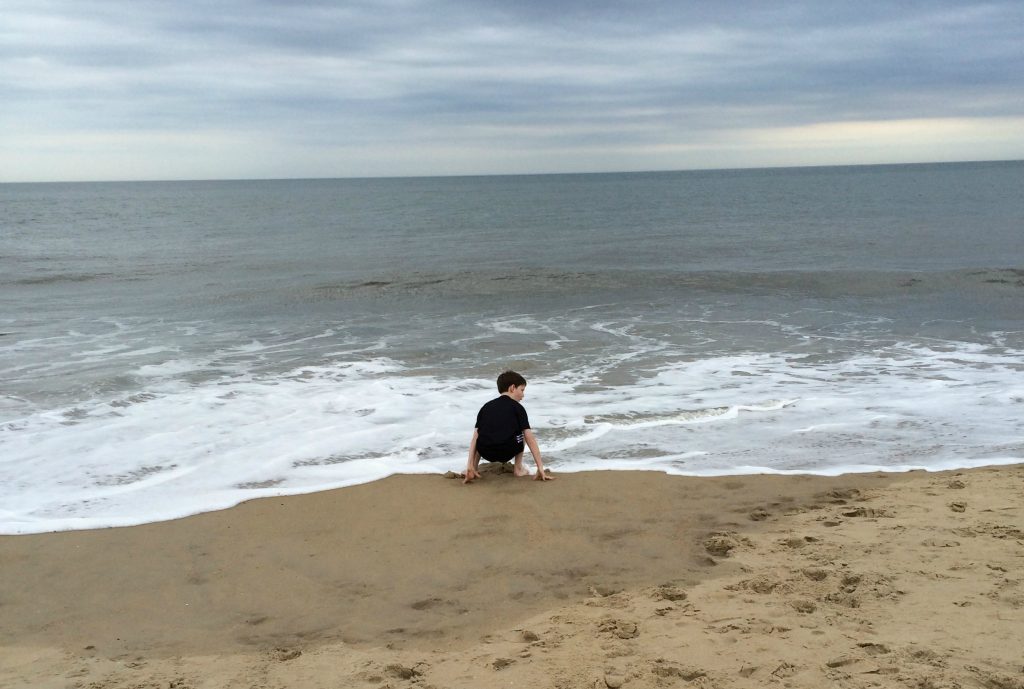 Finally, I got to head to bed, thankfully with the knowledge that a friend had rented a house near the finish line and that I could park there. I, of course, barely slept, but I’ve gotten used to my inability to sleep on race nights.

Sunday morning dawned sunny and windy. It was about 50 degrees, but the wind made it feel a lot colder. I’d completely forgotten a throwaway, so I ended up deciding to wear a long sleeve shirt to the start line. I figured I’d tie it around my waist when I got too warm. Minutes before the start, my stomach had a few words to say to me. I considered hitting the potties again, but they were all the way across the parking lot and my corral was about to start. And then it was “GO” time.

I started a bit faster than planned, but I knew there was a real bathroom around mile 3-3.5 on the Boardwalk. I actually felt really good (except my tummy) and felt like a mid-10s pace was easy. It was pretty windy in the road and even more so once we hit the boardwalk. Then, at mile 3.5, I saw it. A bathroom. With running water and flushing toilets. And no line. I almost didn’t stop, but I’m so glad I did. Best spent 5+ minutes ever.

It took me a mile after that stop to get back into a rhythm, but once I did, I was able to start with some decent paces. After we finished the boardwalk, we ran down a road and then into just a bit of Cape Henhelopen State Park. There we did a u-turn and ran back the way we came. We stayed on the same route until mile 10 and then ran on roads for the remainder of the run. For many of those miles, I was able to keep my pace in the low 10s and mid 9s, without feeling like I was pushing too hard. It thrills me that I’m seeing miles in the 9s again and blows my mind that they are happening in the last 3-5 miles of a half marathon, since I have difficulty hitting those paces during training runs.

Finally, I turned the corner and hit the finish line! Not a PR, but if you subtract out lost bathroom time, it was faster than last week! Sadly, I had to grab my medal and run, so I didn’t get to enjoy the after party at all. I grabbed the car from my friend’s house and raced back to the hotel to shower and hit the road to get home in time for a soccer game.

Would I do the Coastal Delaware Running Festival again?

If I lived near it, I would. This is a tricky race – we had perfect weather. There could have been a little less wind and a little less sun, but overall it was good. But there’s not much shade, so if it had been any warmer, it would have been awful. It’s also just before the start of the season, so there were a lot of people already in town and the race adds quite a few more. Add in the fact that it’s on a Sunday and Sunday afternoon traffic back to DC sucks, and I’m really unlikely to run it again. Too bad, as the medal is awesome and the race was really well organized and part of the course was gorgeous. 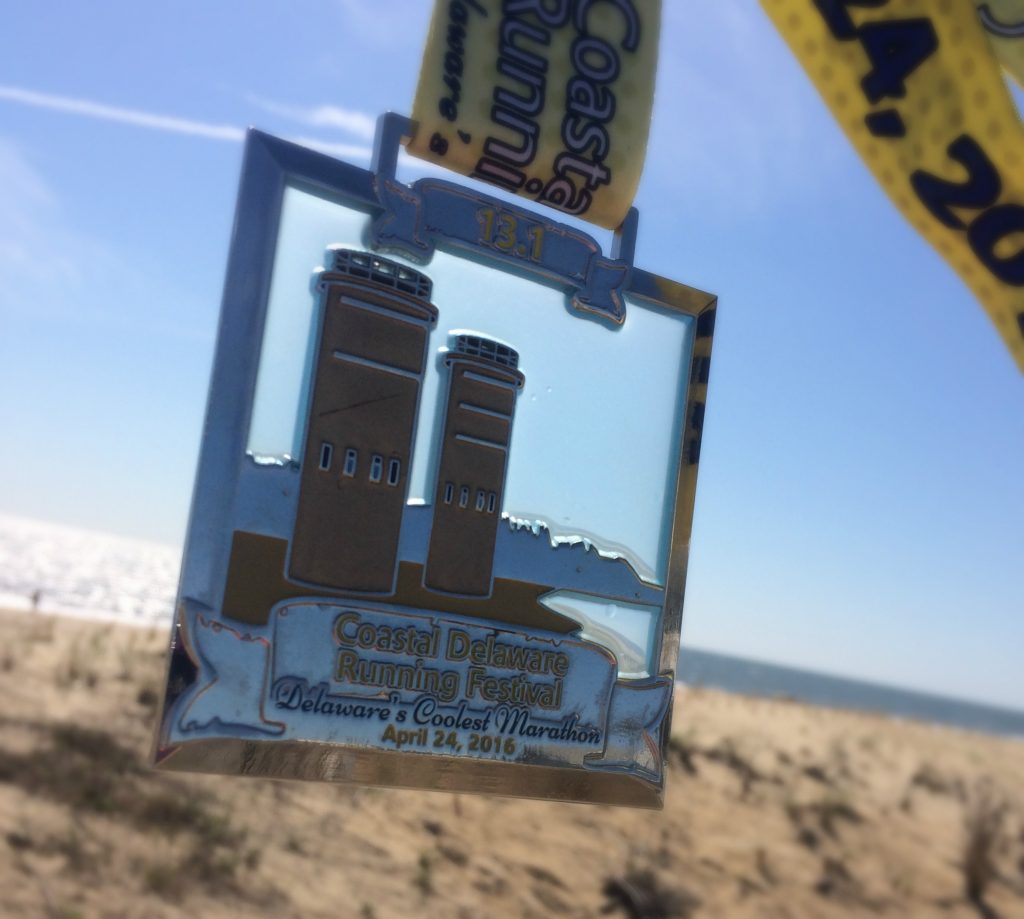 Coastal Delaware half was race #12 on my trip to Mercury. I’m finally half way there. I have 8 more races in 8 more states in the next month!

I’m linking up with HoHo and Tricia for Weekly Wrap.