You are here: Home / injury / DNSing Love the Run 5k

AKA “Did not start”.  This weekend was a good weekend, but it was not a good running weekend.

When last we “chatted”, I’d just finished a hard half marathon that included two+ miles of pain in my foot + a wicked bad blister on my heel.  Not knowing what caused those issues and a cold rainy day led me to choose the treadmill on Friday.  Unfortunately, thanks to the blister, my 11 miler became 6.1.

Not to worry, I’d run on Saturday instead.  I had the brilliant (not) idea to run to packet pick up for the Love the Run 5k that I was running the next day.  It was a 6 mile run and I figured I could add on some distance in the neighborhood near the store and get 11 miles in. Beer Geek said he’d pick me up in the store when I was done.

First, I spent the first two miles convinced I was going to toss my cookies in someone’s yard.  No idea what that was all about. Finally got that under control at about mile 2.

I figured I could keep running and just finish the 6, but then my right calf seized up.  Yes, in case you are wondering, this is where I should have called Beer Geek.  Instead, I hobbled/walked/ran 2.5 miles with a pain in my left foot and a seized up right calf.

Long story short, I spent the rest of Saturday limping, was unable to run my race on Sunday, and am not letting myself run today.

In fact, I volunteered on Sunday, but I made myself wear jeans to the race because otherwise I probably would have been stupid enough to run. 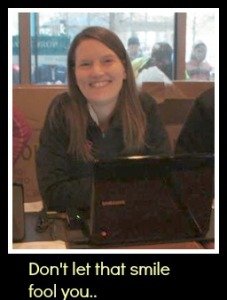 Five weeks to go until my big adventure. Fingers crossed that this is just a minor setback.